Almost there now! I’ll be an antler-free zone this year with any luck!
And that is all down to the kindness of my friends who, getting into the Christmas spirit, have all rallied round.

Toby and Austin are with me today… they are handsome boys, I have to say. They are also very kind too, which seems to fit well with their two-legs.

Did you know that every year their two legses give lots of money to charity at Christmas? And they let other two-legses join in, even if they haven’t any money to spare!
This year, all people have to do is leave a link on their two-legs’s blog here.

Mind, seeing as you know what everyone is up to, I s’ppose you already knew that.

Available on Kindle and in paperback

I was thinking, though. You know whether we’ve been ‘naughty or nice’… and every year, you give us another chance to start afresh. That’s pretty cool. A bit like her when she’s just washed the floor and I come in with muddy paws every day…

Anyway, I know you are busy, so I’ll just remind you, that it would be really cool if you could slip a few of my new Christmas books into a stocking or two…

And then I’ll leave you in peace to read Austin and Toby’s letter.

Meanwhile, I need to talk to her about trifles…

We haven’t got one yet 😦

Did you know that trifles can walk? Yep, not only do we have a great tail to tell you, but also a great tip that can save your readers over £200 a year.

There we both were, taking a well-earned nap after all the walking, playing, eating and sleeping we do when lots of huffing and puffing rudely awakened us. We thought the central heating had come on a couple of hours early, when all of a sudden, we heard one of the boys’ shout, “oh, don’t bother Hugh, I’ll do it myself!”

Intrigued, we got up and walked into the hall.

Well, we couldn’t believe our eyes when we saw our two-legs John. He was being attacked on the stairs by what looked like one of those ‘trifles’ Hugh told us about when he made us watch one of his favourite movies again, ‘The Day Of The Trifles” (known by some two-legs as ‘The Day Of The Triffids’). It wasn’t the kind of Christmas movie Hugh had promised us.

After we decided to help get the trifle off John (thank goodness it hadn’t been watered for nearly twelve months), Hugh appeared with a Christmas pudding on his head.

Now, we all know that Christmas pudding is not something any of us dogs or other four-legs should attempt to eat. However, this Christmas pudding seemed to be safe, because it had no pleasant smells and looked like it had spent a long time on a floor that hadn’t been eaten for many months by the monster our ‘two-legs’ call the vacuum cleaner. It was all fluffy and looked like something Hugh’s grandmother had knitted after consuming a few too many sherries.

We’ve seen what humans do to Christmas puddings when they pour petrol on it and set it alight before clapping their paws and then devouring it. So, while Hugh and John huffed and puffed some more while they moved the trifle into the living room, we kept our eyes peeled for the moment when Hugh took the Christmas pudding off his head.

We had a long wait while the boys decorated the trifle with shiny balls.  We thought tennis balls would have looked much better! They also put some lights on the trifle which we’re sure they’d stolen from the tooth fairy because they referred to them as ‘Fairy’s lights.’ Eventually, the fluffy pudding was taken off Hugh’s head and placed near the box the shiny balls live in for most of the year.

We can’t tell you where the fluffy pudding lives now because we’ve hidden it and a two-legs reading this may tell Hugh where it is.

We would have left the hoover monster to eat the pudding. However, the monster’s mouth (known as a nostril – or is it nozzle?) would have become blocked. The boys would have then tried dissecting it before ordering a new baby hoover monster from the stork who delivers human babies. We’re not letting that happen.

Now, this is where our money-saving tip comes in handy. After the boys switched on the tooth fairy’s lights and consumed a yule log and a box of pies that look incredibly good despite being ‘minced’, Hugh mentioned that he’d felt like he’d done four-hours at the gym.

As the boys’ gym membership costs a lot of money (we think it would be far better spent on chicken and tennis balls) our tip to you two-legs who go to the gym is to save your gym membership money by putting up and decorating a trifle not only at Christmas time but every day of the year.

How cool would that be?

Do you think all the two-legs will want to thank us for our money-saving tip?

Merry Christmas from Toby and Austin!

Hugh gets his inspiration for writing from various avenues including writing prompts, photos, eavesdropping and while out walking his dogs, Toby and Austin. Although he was born in Wales, he has lived around various parts of the United Kingdom, including London where he lived and worked for 27 years.

Hugh suffers from a mild form of dyslexia but, after discovering blogging, decided not to allow the condition to stop his passion for writing. Since creating his blog ‘Hugh’s Views & News’ in February 2014, he has built up a strong following and now writes every day. Always keen to promote other bloggers, authors and writers, Hugh enjoys the interaction blogging brings and has built up a group of online friends he considers as an ‘everyday essential’.

His short stories have become well known for the unexpected twists they contain in taking the reader up a completely different path to one they think they are on. One of the best compliments a reader can give Hugh is “I never saw that ending coming.”

A keen photographer, he also enjoys cycling, walking, reading, watching television, and enjoys relaxing with a glass of red wine and sweet popcorn.

Hugh shares his life with John, his civil-partner, and Toby and Austin, their Cardigan Welsh Corgis. 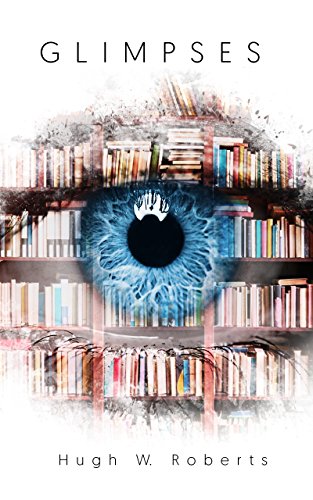 Here, at last, are 28 short stories that will take your mind on a roller coaster of a ride into worlds that conceal unexpected twists and turns.

‘Glimpses’ allows the reader a peek into the lives of everyday people who are about to have life lead them on an unpredicted path. From a mysterious deadly iPad app to a hole in the fence that is not all it seems, to a strange lipstick that appears to have a life of its own, you will encounter terror, laughter, sadness, shock and many other emotions on journeys which promise a thrilling and gripping climax.

If you are a lover of shows such as ‘The Twilight Zone’ and ‘Tales Of The Unexpected’, then you are in for a real treat with this first collection of short stories from Hugh.

Dare you take a glimpse into the lives of these unsuspecting characters?

“If you are looking for a thoroughly entertaining read, Glimpses is the book for you. Each story, cleverly crafted through Hugh’s wonderful imagination, will whisk you away to many different worlds, past, present and future. Every story makes a compelling read and just when you think you know what’s going to happen next, Hugh masterfully reveals a brilliant twist. With bite-size and longer stories, Glimpses is a must-read. I loved it.” – Esther Chilton, Writer, and Author. 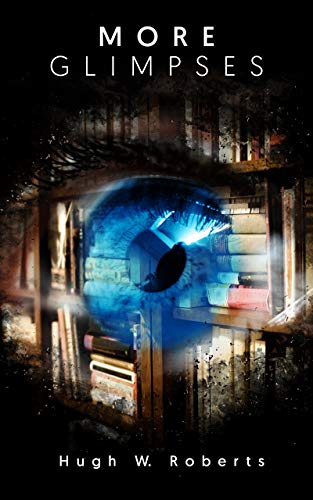 Do you believe in fairies at the bottom of the garden? Or know the real truth about what lurks inside every mobile phone? Would you steal items from a blind person, or send your neighbours on a time travelling adventure fraught with danger and menace to save the human race from a bug? How about staying in a sleepy village where many murders have taken place or coming to the aid of royalty while out shopping?

These are just some of the subjects covered in the second collection of short stories and flash fiction from author and writer, Hugh W. Roberts.

‘More Glimpses’ gives the reader an opportunity to take a peek into the lives of normal, everyday people whose lives are all on a path full of twists, turns and unexpected endings. However, it’s not only about the humans; nothing escapes the extraordinary journeys Hugh has planned for you. If you are a lover of shows such as ‘Black Mirror’ or ‘The Twilight Zone’ then you’re in for another exciting trip in this second collection from Hugh. Come and meet the characters who had no idea their lives were about to be turned upside-down. Enjoy the ride!

“Hugh W. Roberts is back with More…Glimpses, that is! This is his second collection of short stories showcasing the dark and somewhat twisted mind of humankind. Roberts’ witty imagination, coupled with his love of stories from The Twilight Zone and Outer Limits, crafts 32 more tales of dark humour and hair-raising tales in a variety of genres, some a short read, others a little longer to get your heart racing! In every case, just when you think you’ve got the tale figured out, Roberts drops in a completely unexpected ending that may make you jump, laugh or even ponder your use of technology! The Tunnel, Baby Talk, Floral Hall and The Right Choice were my favourites!” – Terri Webster Schrandt, Writer and Blogger.

Sue Vincent is a Yorkshire-born writer and one of the Directors of The Silent Eye, a modern Mystery School. She writes alone and with Stuart France, exploring ancient myths, the mysterious landscape of Albion and the inner journey of the soul. Find out more at France and Vincent. She is owned by a small dog who also blogs. Follow her at scvincent.com and on Twitter @SCVincent. Find her books on Goodreads and follow her on Amazon worldwide to find out about new releases and offers. Email: findme@scvincent.com.
View all posts by Sue Vincent →
This entry was posted in Ani's Advent 2019 and tagged Battersea, charity, Christmas appeal triffids, Christmas tree, Dogs, trifles. Bookmark the permalink.