Going West: the Yews of Nevern… and Other Surprises

I was looking forward to Nevern Church… another one of those, like Kilpeck, that we would visit ‘one day’… and were visiting at last. To think that we had seen so much since Kilpeck, just three days before, seems incredible. But that’s the way these trips seem to work… time takes time off to stretch for a while, leaving us space to play. The trouble with some of these places, though, is that you come across them in researching other places and forget what it is that you actually wanted to see. All I could recall was that Nevern was home to the Bleeding Yew and was, in fact, renowned for its avenue of ancient yew trees, some of them over seven hundred years old. Just like Kilpeck, though, we found far more than we imagined. 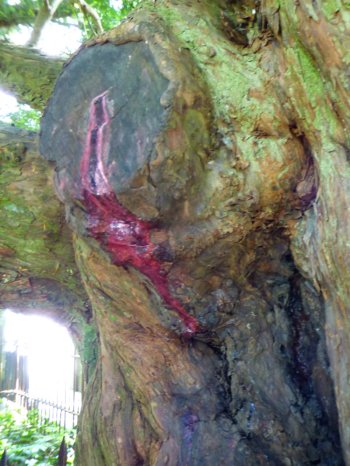 The Bleeding Yew is not an uncommon gardening phenomenon, but few have a place in legend or are credited with being miraculous. This one is said to exude the viscous, blood-red liquid because a monk was hung there for a crime of which he was innocent. Or because the Cross on which Jesus was crucified was a yew and the tree bled in sympathy. Or because it weeps until a Welsh king sits once more on the throne. Kings may have something to do with the story indeed; according to a theory expounded by Martin Porter at The Greenman, King Vortigern himself may have found his final resting place at Nevern when he fled from the Saxons in defeat. Whatever the true reason, it is a strange sight.

Vortigern takes us right back to the days when this church was first built and back to the days of King Arthur. The Arthurian legends that we all know and love are mainly drawn from later, romanticised retellings, but there are so many ancient sites and snippets of folklore that associate Arthur with Wales, as well as the later stories that ‘the once and future king’ may well have originated there. He is certainly associated with Nevern in folklore. Not only as some say that it was at Nevern that he met his end, but there is a Pilgrim’s Cross cut into the stone of what seems to be a bricked-up cave halfway up the hill to the remains of the castle… a site we would have no time on this trip to visit… and one legend has it that Arthur hid the Grail in this cave. Another, more Christianised version, is that the Knights Templar hid the Cross of the Crucifixion in the cave, the proximity of which might explain why the yew bleeds…. or at least why the legend arose. The timing would be about right for the yew, if it is over seven hundred years old, as the Templars were forcibly eradicated in 1312.

Sue Vincent is a Yorkshire-born writer and one of the Directors of The Silent Eye, a modern Mystery School. She writes alone and with Stuart France, exploring ancient myths, the mysterious landscape of Albion and the inner journey of the soul. Find out more at France and Vincent. She is owned by a small dog who also blogs. Follow her at scvincent.com and on Twitter @SCVincent. Find her books on Goodreads and follow her on Amazon worldwide to find out about new releases and offers. Email: findme@scvincent.com.
View all posts by Sue Vincent →
This entry was posted in albion, Ancestors, Ancient sites, Books, Don and Wen and tagged bleeding yew, Carved cross, Celtic Christianity, celtic cross, churches, ogham, sacred sites, spirituality, symbolism, The Silent Eye, Wales, workshop. Bookmark the permalink.