Dreaming Stones: From the Depths… 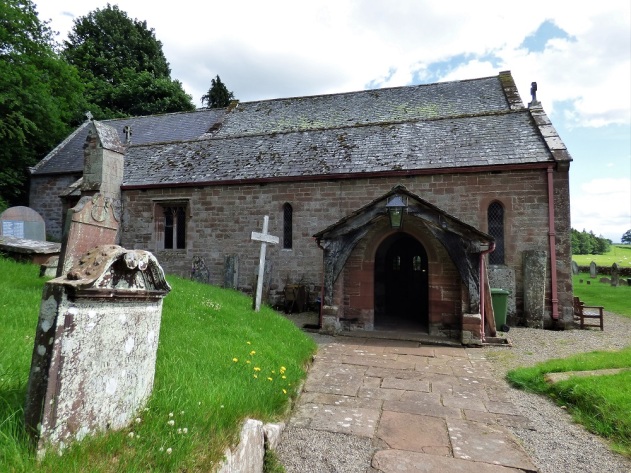 We could see, as soon as we passed through the gate, that the church in Kirkoswald was going to be a good one. The village itself bears its name… Oswald’s church… and the dedication was given because the body of the sainted Northumbrian king had passed through the village after he was killed by Penda, the last pagan king of Mercia, at the Battle of Maserfield, fourteen hundred years ago.

We have crossed St Oswald’s path many times before. It was he whose relics had rested in Bamburgh Castle, which we had visited during the Northumbrian workshop, and he who had given the island of Lindisfarne to St Aidan, whose shrine we had also visited on that trip.

There are many tales of miracles associated with St Oswald, some of which have overtones more often associated with pagan, rather than Christian, myths. Perhaps the best known is that when he was slain, dismembered and beheaded on the battlefield, a raven lifted up his severed arm and took it high into a tree. The tree lived to be a venerable age, with all the vigour of youth… but, more importantly, for our adventure, where the arm finally fell to earth, a healing spring rose from the ground.

There are great yews guarding the churchyard, large enough to have stood watch for hundreds of years, and a collection of medieval grave slabs, similar to those we had seen the day before in the little church at Rodel… now over four hundred miles and almost a lifetime away. The Western Isles seemed almost to have retreated once more into the mists and yet they were very present in our hearts and minds as the adventure drew to its close.

Sue Vincent is a Yorkshire-born writer and one of the Directors of The Silent Eye, a modern Mystery School. She writes alone and with Stuart France, exploring ancient myths, the mysterious landscape of Albion and the inner journey of the soul. Find out more at France and Vincent. She is owned by a small dog who also blogs. Follow her at scvincent.com and on Twitter @SCVincent. Find her books on Goodreads and follow her on Amazon worldwide to find out about new releases and offers. Email: findme@scvincent.com.
View all posts by Sue Vincent →
This entry was posted in adventure, albion, Ancestors, Ancient sites, Churches, Don and Wen, france and vincent, Photography and tagged Cumbria, Kirkoswald, landscape, miracles, raven, road trip, Scotland, St Oswald, travel, Western Isles. Bookmark the permalink.

2 Responses to Dreaming Stones: From the Depths…