A Thousand Miles of History XVII: The Green Chapel…

Beneath the flower-strewn lawns of Carn Euny is a mysterious passage known as a fougou, which comes from the old Cornish word for ‘cave’. There are many theories about why they were built, but no definitive evidence. According to the experts, they may have been places of refuge in case of attack, cold storage for food or places with some kind of ritual significance. It is a standing joke in archaeology that anything that is not understood is called a ‘ritual site’, and this tends to demean the many places that undoubtedly were once seen as spiritually significant… But at Carn Euny, the stones speak for themselves.

I knew there was a fougou at the site. I had visited one forty years ago in the area, impressive in its age and construction, but relatively uninteresting; it was just a stone-lined tunnel beneath the ground. I was quite happy to accept ‘storage’ and ‘refuge’ as definitions for that one and, to be honest, I was expecting little more at Carn Euny. And this is one of the joys of not doing your research before you visit such places.

The fougou and what it holds are the oldest parts of the site still visible. We had seen one end of the tunnel through the empty socket of the window of the old cottage that once stood amidst the remains of the ancient settlement. The low entrance didn’t look too promising. We had found a second entrance, now sealed, and stuck the camera through a gap in the boards to see inside. That was none too promising either. 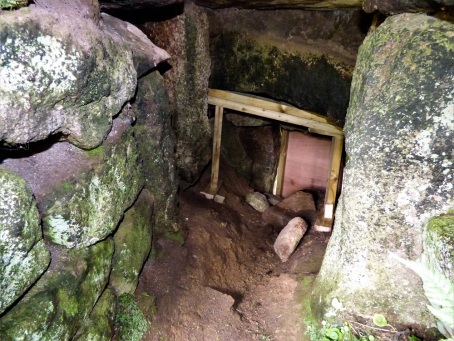 The third entrance, though, was a different matter altogether. No sooner had we descended beneath the level lawns than the earth swallowed us. The burgeoning sunshine was eclipsed by cool shadows as stone closed around us.  All sense of time fell away… we could have been anywhen… but the sense of place was palpable.

Ahead of us stretched a low tunnel, stone-lined and roofed with massive slabs. The small portal at the far end led to the old cottage, but any glimpse of the world outside was obliterated by light. Before us was a single stone, whose guardian presence in the shadows looked for all the world like a cloaked and hooded figure. And, what it guarded was a treasure, old beyond imagining. 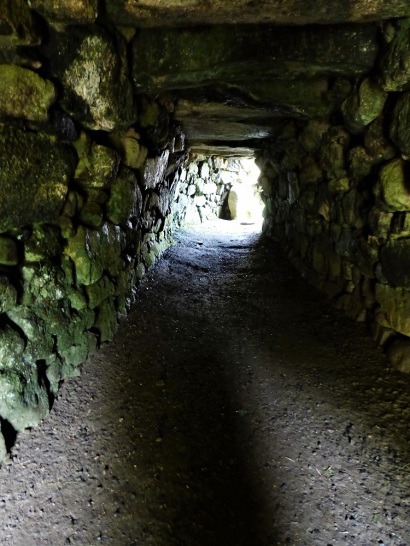 The low lintel of the portal forces you to bow down… even one of my reduced inches. You cannot enter without at least the appearance of reverence… and when you do, the sense of reverence comes easily. You stand within a circular chamber, its walls tapering upwards and inwards like an old-fashioned beehive, to where a discrete modern grille lets in a little light.

Before you is a niche, reminiscent of a chimneyless fireplace. Between you and the niche is a stone that may have been part of the roof, but looks as it if should once have been standing, or perhaps it has always lain flat, serving as a chair, table or altar for the rites that took place within the belly of the earth. And all the walls are covered with a moss or lichen of some kind, that is the most brilliant emerald green that appears to light up from within. Like truth or being, the luminescence occurs only when you stand directly before it… turn away, even a little, and it is gone, leaving only the emerald scar behind.

The acoustics, even with the repairs to the once-collapsed roof, are wonderful. It is not hard to imagine how the sound of drum and voice could invoke the heartbeat of the earth here. Was it something akin to a sweat lodge? A place to commune with the ancestors or a shamanic place of inner journeying? That was the impression it gave. 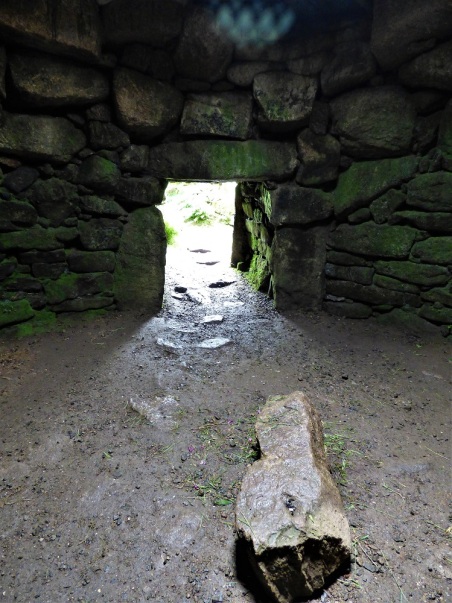 Stone remembers, and even after millennia, it seemed to respond to the chant that began to resonate through the chamber. One man came in hesitantly, looked around for a second with the eyes of a startled doe and left. A few moments later, another man came in, bowing low to earth before taking his place with us. His companion joined us, and, without a word, we four held the quarters, as if it were the most natural thing in the world… as indeed such magic is, when we let the earth speak and we listen. 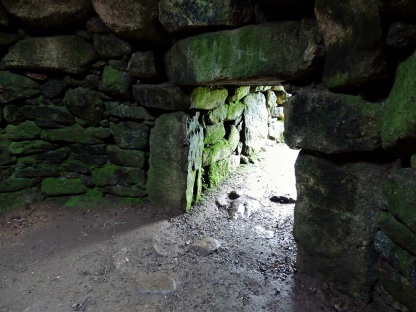 “It is nice to see people treating these places with respect,” said the gentleman as the echoes died to whispers. Later, we introduced ourselves. We mentioned that we were visiting some of the sites on the Michael Line as described by the late Hamish Miller in his book, The Sun and the Serpent, written with Paul Broadhurst.

“Oh, did you know Hamish?” No, we had never met him, explained Stuart, but he had heard him give one lecture in person. Our new acquaintance, Tim Willcocks, mentioned how helpful Broadhurst had been when he was writing his own book, On the Trail of the Waitaha. Stuart smiled. Of all the many lectures Hamish had given over the years, it was one about the Waitaha, the first peoples of New Zealand, on which he had heard Hamish speak. Yet another synchronicity to add to our growing list. 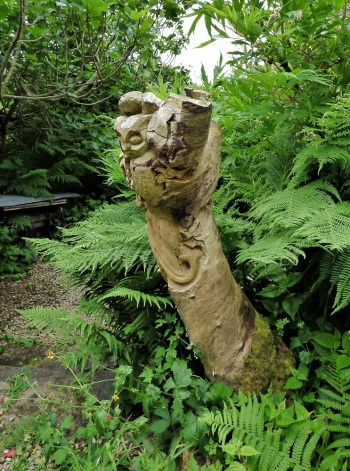 We stood in the fougou sharing stories and getting to know each other a little. There is an odd feeling of kinship when such meetings occur, as if there is recognition, rather than a simple crossing of paths. Exchanging contact details, we left the chamber in no hurry to part and stood by the guardian stone talking for a while, before walking together to St Euny’s Well, a sacred spring a few yards beyond the boundary.

(Years later, sitting around the dinner table with our companions on yet another workshop weekend, we would learn that this ‘coincidental’ meeting was even odder than we had realised, as our new acquaintances were part of the group run by an old and dear friend who has attended many of our ritual weekends. And none of us live anywhere near Cornwall…). 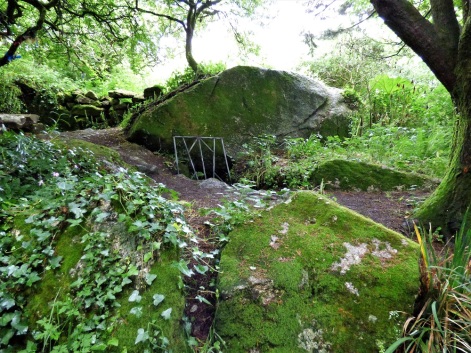 We passed a guardian carved into an old tree stump and a four-legged guardian greeted us as we walked past the one cottage still inhabited after so many years. The well, that showed barely a trace of moisture when we visited, is covered by an incongruous modern grille and an enormous boulder, bigger than most cars, and is surrounded by trees festooned with small offerings. Close by is another spring, guarded by ancient stones. 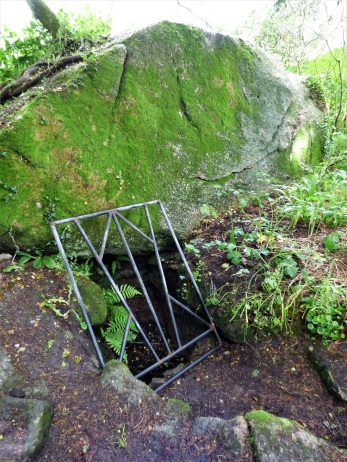 The well is dedicated to St Euny, about whom little is known, except that he now marks one end of St Michael’s Way, a pilgrim route across Cornwall, that can either be started at Lelant… a place associated with St Euny… or at St Ives, which is associated with his sister, St Ia. Her story is better known; it is told that when her brothers sailed across from Ireland to bring Christianity to these shores, she was refused permission to accompany them, being too fragile for the journey. Seeing a leaf floating on the water, she took her staff and pushed the leaf beneath the waves. The leaf grew, and she stepped upon it, sailing it across the sea to when her mission called her. 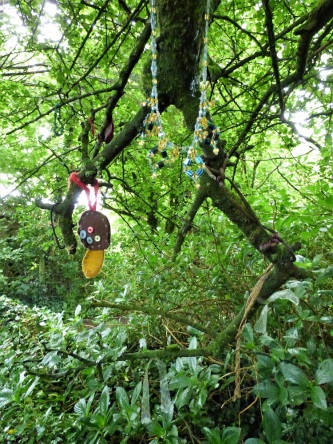 Religious services were held at the well until the eighteenth century, only when they ceased did it begin to fall into disrepair.  Women would still bathe their children in its waters to cure and protect them for illness and the clooties attest to a continued reverence for the site. 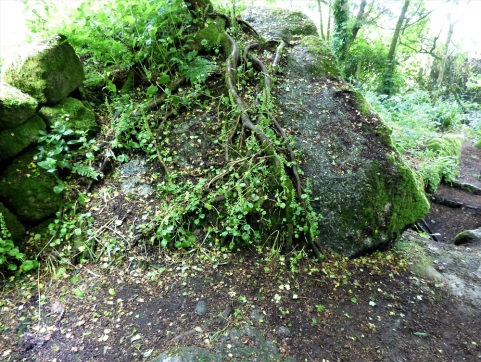 We walked out beneath the sun, looking over the landscape once farmed and mined by those who had lived at Carn Euny. The sun had burned away the mists and the air sparkled. Earth and water, fire and air… and together we had touched something of spirit. Reluctantly, we took our leave of each other, hoping that we will one day meet again and promising to stay in touch. We would have stayed longer, but we had a tide to catch. The gentlemen, in typically English fashion, began to shake hands. Pratima and I looked at each other, raised our eyebrows, smiled and hugged… as then did the gentlemen. A few days later, I had an email from Tim, with some photographs he had taken in the fougou… sometimes magic just happens.

Sue Vincent is a Yorkshire-born writer and one of the Directors of The Silent Eye, a modern Mystery School. She writes alone and with Stuart France, exploring ancient myths, the mysterious landscape of Albion and the inner journey of the soul. Find out more at France and Vincent. She is owned by a small dog who also blogs. Follow her at scvincent.com and on Twitter @SCVincent. Find her books on Goodreads and follow her on Amazon worldwide to find out about new releases and offers. Email: findme@scvincent.com.
View all posts by Sue Vincent →
This entry was posted in adventure, albion, Ancient sites, Books, Don and Wen, Elusive realities, historic sites, mystery, Photography, Sacred sites, Stuart France and Sue Vincent and tagged Carn Euny, Cornwall, fougou, Hamish Miller, Holy well, Michael Line, St Ia, Tim Willcocks, Wataha. Bookmark the permalink.

5 Responses to A Thousand Miles of History XVII: The Green Chapel…