A Thousand Miles of History XIV: Just a place to play…

We liked St Just as soon as we arrived… the little town, just a few miles from Land’s End has a good ‘feel’ to it, even when it is shrouded in sea-mist. It is a place of old stone and flowers, and, unlike many more modern towns, it still projects a strong sense of history and community in spite of the inevitable traces of tourism.

Although breakfast was our priority, the first thing we found was a mystery. Heading towards the obvious central point, the clock tower, we found ourselves within what looked like a henge, right in the middle of the town.  Now, Cornwall is better than many places at preserving its archaeology, but for a town to have grown up with its walls pressed close to a henge would be unusual, to say the least. The earthen banks seemed almost, but not quite right, though, and the circle of six stones within the enclosure didn’t look or feel quite at home either. It was almost as if this were a pretty good fake.

We walked through the enclosure, surrounded by the embankment and the mist, wondering what on earth was going on here. Once outside the gates, we had a better idea. The stone and earth embankments formed the Plen an Gwarry, which means the ‘playing place’ a medieval arena used for the performance of the Cornish miracle plays. These were religious stories designed to help the spread of Christianity by capturing the imagination and attention of the audience. 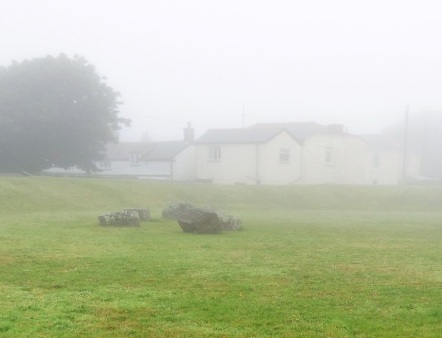 So, not a henge then… or was it? In the eighteenth century, there was a seven-foot-high bank surrounded by a ten-foot ditch… which certainly sounds like a henge. The playing place was restored and remodelled to give work to local people as the mines began to close in the nineteenth century, exposing the walls and losing the ditch. Even so, it is one of only two such playing places that survive near-complete today. It has been used over the centuries for everything from cock-fighting to dancing and is still at the heart of the local Feast and the Lafrowda festivities.

But what was a henge if not a place where people gathered to celebrate both their mysteries and the festivals of the year? Although there may not be archaeology at the playing place to support or refute the theory, I have to wonder if the henges, stone circles and barrows that pepper the area did not have an effect on the construction of the plen an gwarry. If all the traditions of your folklore, history and landscape work in circles, what other form would you choose for a gathering place at the heart of your nascent community? 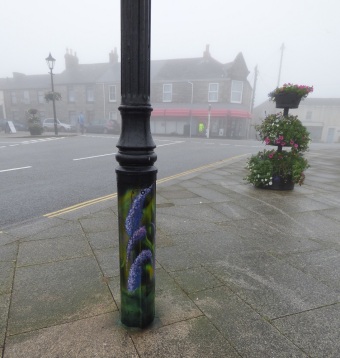 A circle is the simplest and most natural form where all positions are equal, where a company of souls may come together to watch or be part of something greater than their individual presence. Not for nothing do the legends tell of Arthur’s Round Table… and that legendary king was, we are told, conceived and born at Tintagel, just a few miles up the Cornish coast. St Just’s Plen an Gwarry may or may not be older than it appears in physical terms, but the true origins of the playing place are, I believe, rooted in the mists of prehistory.

Sue Vincent is a Yorkshire-born writer and one of the Directors of The Silent Eye, a modern Mystery School. She writes alone and with Stuart France, exploring ancient myths, the mysterious landscape of Albion and the inner journey of the soul. Find out more at France and Vincent. She is owned by a small dog who also blogs. Follow her at scvincent.com and on Twitter @SCVincent. Find her books on Goodreads and follow her on Amazon worldwide to find out about new releases and offers. Email: findme@scvincent.com.
View all posts by Sue Vincent →
This entry was posted in albion, Ancient sites, Art, Books, Don and Wen and tagged Cornwall, playing place, plen an gwarry, St Just. Bookmark the permalink.

4 Responses to A Thousand Miles of History XIV: Just a place to play…