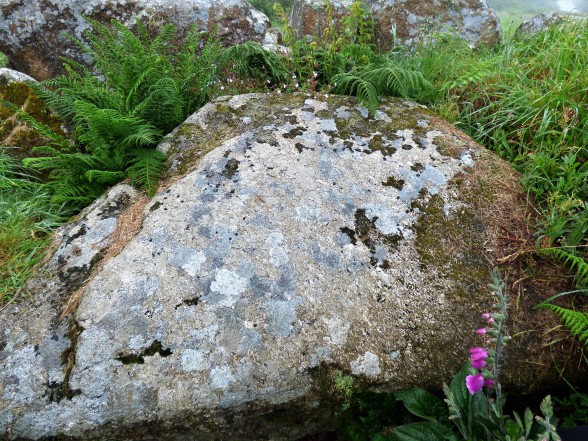 We left the Merry Maidens, still buzzing with the magic of the stone circle in the mist. Distracted by the profusion of wildflowers in the hedgerows, we might have driven blithely by, but…
“Whoa…”
“What’s that…” we said in unison as my foot hit the brakes, just seconds after resuming our journey.  Finding nowhere else to park, we turned around, parked once more at the Maidens and walked back to look at what had caught our attention. 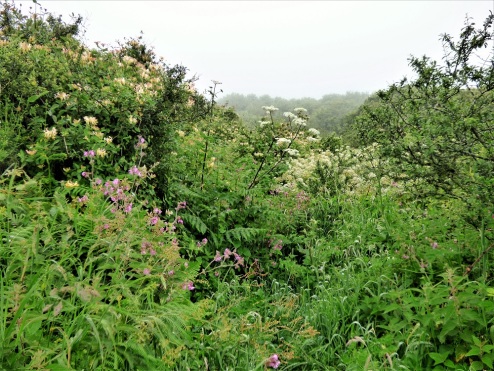 You almost have to be ‘tuned in’ to stumble across Hirvedh Treguhyon. From the road, it seems to be no more than a couple of stray boulders in the grass of the verge, but in fact, it is a superb example of a Neolithic entrance tomb… a rare type of passage grave. It was once covered by a mound of earth, with only the entrance visible and blocked by a carved stone, but now it stands open to the winds, its capstones exposed, and its occupants long departed. 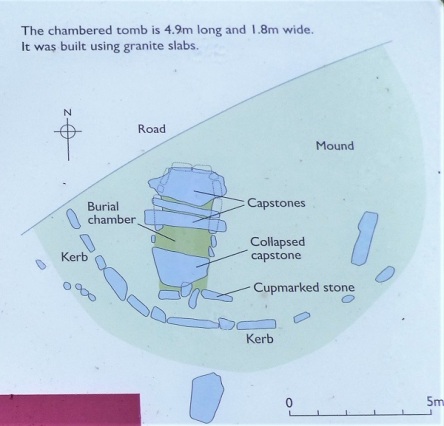 Plan from photograph of information board

Hirvedh Treguhyon… or Tregiffian Burial Chamber… was first built four to five thousand years ago. Only half of it is now visible, as the road that was built in the late nineteenth century obliterated the rest and its mound is long since gone. Even so, what remains is well worth stumbling upon. 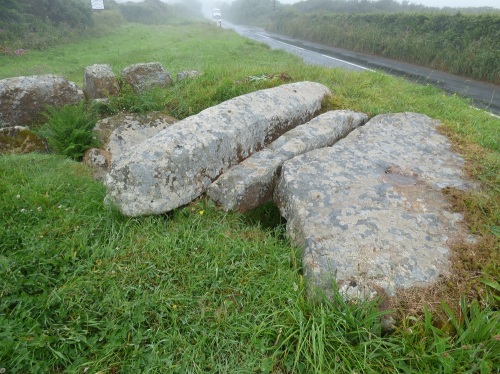 The fifteen-foot-long central chamber was constructed with a lining of granite uprights and capped with massive stones, some ten feet long, of which four still remain. The entrance enclosure is still in place, and a replica of the carved stone that once marked its threshold stands guard. The original stone was thought to be so significant that it was taken to the museum in Truro some years ago to protect it from weathering and vandalism. 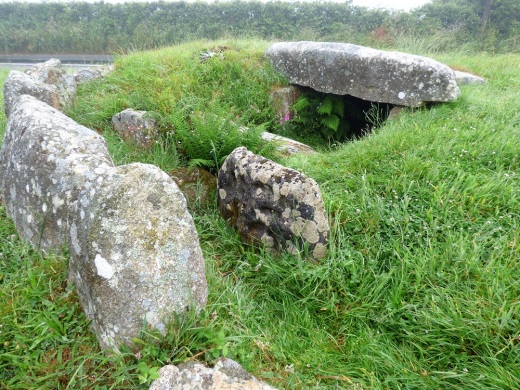 At first glance, the cast reproduction of the cup-marked stone seems no more than a meaningless jumble of depressions, but closer inspection shows the cups to be a mix of circular and elliptical carvings, numbering twelve of one and thirteen of the other. Given the position of the tomb, at the heart of an ancient, sacred landscape littered with standing stones, circles and barrows, many with astronomical alignments, experts began to look at possible meanings. They came to the conclusion that the stone probably refers to the annual lunar cycle… as every year holds either twelve full and thirteen new moons, or vice versa. 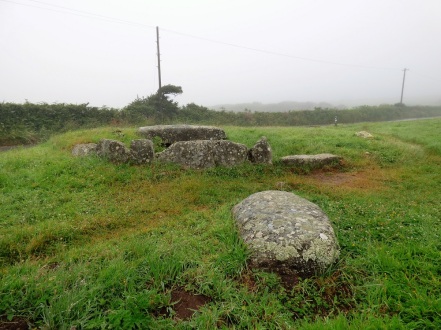 Quite why our ancestors chose to carve the lunar cycle into stone, we may never know and can only speculate. Some alignments may be easier to understand and explain on a mundane level… full moons would allow activity after sundown, including travel and hunting. Solstice and equinox, for example, would have a bearing on agriculture and the breeding cycle of animals… and we still welcome the ending of the cold, dark womb of winter. 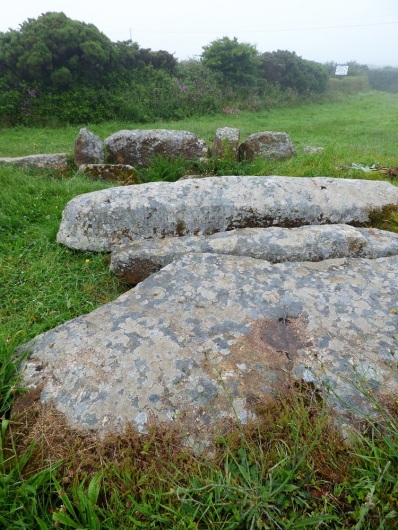 Whether there was any reason beyond the practical, though, is not something we can prove… except by looking at how human thought evolves within a society and Man’s relationship with those forces he perceives as emanations of divinity. The understanding of our dependence upon Nature for survival has always engendered respect for her forces… and respect may, over time, evolve into reverence… and devolve into supplication and propitiation, before seeking another focus and dismissing its former gods as primitive. 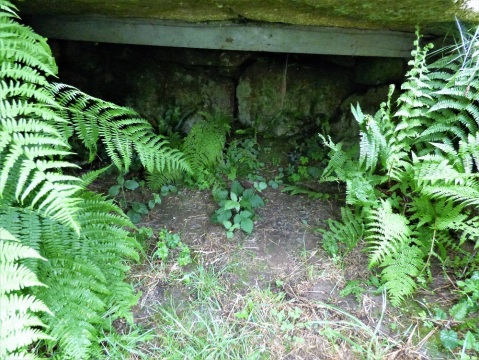 We tend to forget that our initial respect was for the natural forces that allow us to live on this beautiful planet. If we perceived Spirit in the rocks and trees, the clouds and the rivers… maybe there was a reason for that and by entering into communion with the life around us, we gained a deeper understanding of our own. 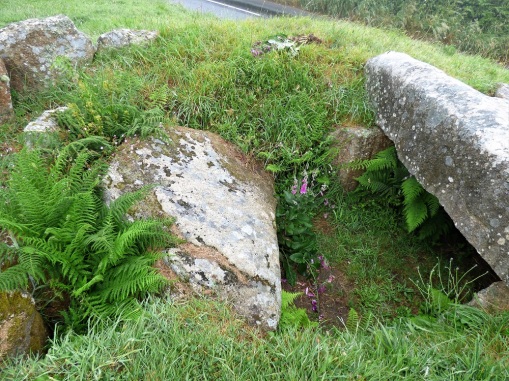 That our ancestors had deeply-held spiritual beliefs, is evidenced by the care with which they laid their dead to rest. From the simplest stone-lined cist, to the elaborate tombs of monumental stone, no effort was spared. Gifts were given to the dead in the form of grave goods… often the best and rarest of objects would be sent with the dead into the otherworld, and their mortal remains were treated with care and respect. 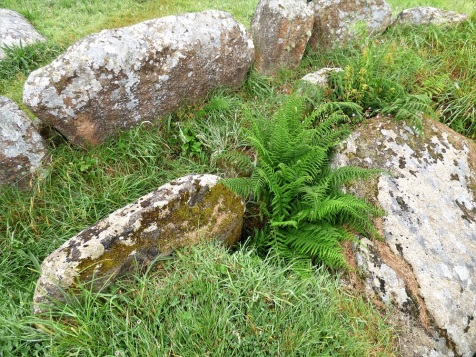 In this one small tomb, half buried beneath the modern road, layer upon layer of burials were found, showing that the tomb was used for generations. On the deepest, oldest levels, cremations were interred in pits, with each ancestor’s ashes contained within a funerary urn. Offerings of flint tools were left… and who knows what else… food, or perhaps flowers, that have been devoured by passing millennia. 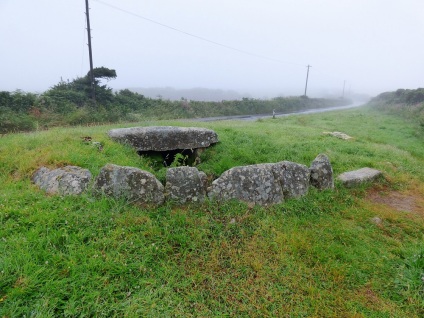 For the two of us who entered the forgotten tomb, our feet washed by the morning dew and our faces damp with mist, there is always a sense of reverence. We do not know the stories of those whose remains were laid to rest in this place, we do not know their hopes and dreams, their fears, loves or beliefs… but we know that they were not so very different from our own. Millennia apart, they are still our kin, and our bodies remember what time has forgotten. Their past is our future and the dead guard the gates of life. 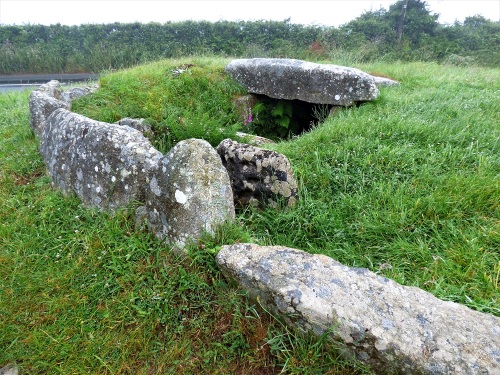 Sue Vincent is a Yorkshire-born writer and one of the Directors of The Silent Eye, a modern Mystery School. She writes alone and with Stuart France, exploring ancient myths, the mysterious landscape of Albion and the inner journey of the soul. Find out more at France and Vincent. She is owned by a small dog who also blogs. Follow her at scvincent.com and on Twitter @SCVincent. Find her books on Goodreads and follow her on Amazon worldwide to find out about new releases and offers. Email: findme@scvincent.com.
View all posts by Sue Vincent →
This entry was posted in albion, ancient mound, Ancient sites, Books, Don and Wen, History, Photography and tagged Ancestors, beliefs, Cornwall, death, nature, reverence, tomb, Tregyffan. Bookmark the permalink.

4 Responses to A Thousand Miles of History XII: Hirvedh Treguhyon