A Thousand Miles of History XI: The Dancing Stones

We spent the night in Penzance… and that’s about as much as we can say about the place. It is probably unfair to judge the town on the little we saw of it in our ten-minute stroll by the sea, on a cold, rainy evening, after the sun had dipped below the horizon. Next morning, as our hotel did not offer breakfast, we were able to get away bright and early, passing through picturesque Newlyn with barely a glance and in search of stones and the sites that mark the Michael Line.

We did not have far to seek, as Cornwall is littered with ancient stones, from circles and menhirs, to burial chambers and ancient crosses. The wayside crosses are curious affairs too, reminiscent of the old Herms that once guarded the crossroads. There are many of them across the county and, while we began by stopping excitedly to photograph each one, by the end of the morning we realised that to do so, we would need a month or two more than the few days we had at out disposal. Instead, we took the road towards Lamorna, in search of the Dance of Stones.

Instead of being turned to stone for playing games on the Sabbath, the Merry Maidens were petrified for dancing, or so the story goes. Like the Hurlers, though, a pair of standing stones called the Pipers accompany them. These two ten-feet tall stones are on private land, but luckily, we caught a glimpse of them as we passed, towering over the hedgerows. 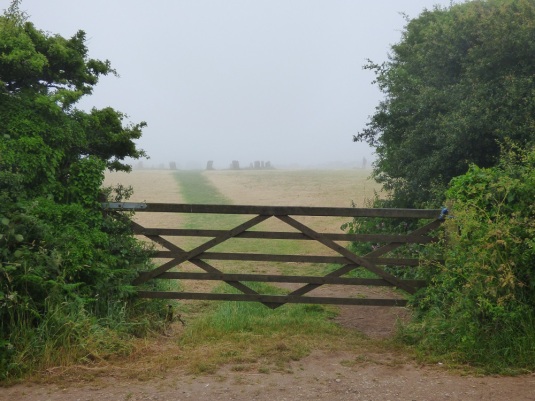 We were lucky too to spot the discrete signpost for the Merry Maidens. Cornwall is incredibly rich in archaeological sites and seems to have made a conscious decision to protect them by making them less than obvious to find. The signs are there… they are marked on the maps… but only the determined, dedicated or just plain stubborn are likely to find them… especially when the sea-mist rolls in and covers the land in a pale pall of silence.

Appearances to the contrary, though, it was the perfect weather to be making the acquaintance of these ancient stones. The camera lens was constantly misted, the world receded into the mute, grey magic that swirled and gave life to the silent stillness of the frozen dance.

We were fair bouncing with excitement when we got our first glimpse over the gate. The stones seemed to form a different horizon in the mists… as if opening a passage into another time, another landscape… an otherworld.  And, as we approached, the very integrity of the circle seemed to confirm that this could not be the here and now that we knew.

The Merry Maidens circle is called Dans Maen in Cornish, from the words for ‘stone’ and ‘dance’, which is possibly a corruption of Zans Meyn, meaning sacred stone. Another name is Dawn’s Men… perhaps a corruption of the Cornish too, but I wonder if it harks back to the astronomical alignments of the stones.

Unlike many stone circles, this one is perfectly circular… and appears complete. There are nineteen stones, standing around four and a half feet tall and the circle is about eighty feet across. Modern thought is that there were once eighteen stones and that it may have been ‘tidied’ at some point in its past.

The alterations in the landscape are not just a bit of tidying though… there was once a second circle of similar size at the site. There were still seven stones remaining a couple of hundred years ago, but by the end of the nineteenth century, it had disappeared. Perhaps its stones now lie buried in the Cornish hedgerows that grow from walls of monumental stone.

The circle is part of a wider ceremonial landscape, with a Bronze Age barrow cemetery close by, where the remains of numerous cremation burials were found. In one hedge is the Gun Rith Standing Stone, which may have been part of a processional avenue. A cup-marked stone found in the vicinity is now in the Truro museum for safe-keeping and a holed standing stone, still known locally as a betrothal stone, now serves as a gatepost. And, had we but known it, we were to stumble across another site almost immediately…

Sue Vincent is a Yorkshire-born writer and one of the Directors of The Silent Eye, a modern Mystery School. She writes alone and with Stuart France, exploring ancient myths, the mysterious landscape of Albion and the inner journey of the soul. Find out more at France and Vincent. She is owned by a small dog who also blogs. Follow her at scvincent.com and on Twitter @SCVincent. Find her books on Goodreads and follow her on Amazon worldwide to find out about new releases and offers. Email: findme@scvincent.com.
View all posts by Sue Vincent →
This entry was posted in adventure, albion, Ancient sites, Books, Don and Wen, historic sites, Photography, Stuart France and Sue Vincent and tagged Cornwall, Merry Maidens, Michael Line, standing stones. Bookmark the permalink.

7 Responses to A Thousand Miles of History XI: The Dancing Stones