A Thousand Miles of History IX: Legends on the rocks

The morning after the workshop, with Alethea and Larissa squeezed into the back of the car, we headed back along the road towards Tavistock, in search of the next site of our day’s explorations. We were going to have a long drive later as we were heading down to Penzance for the night, but for now, the Michael Line was calling… 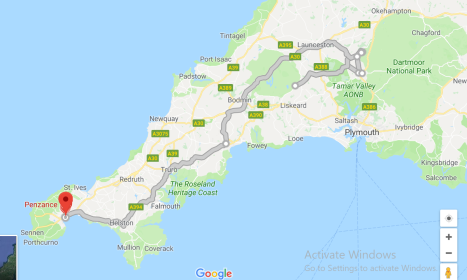 So the drive from North Brentor was a short one… a matter of minutes… as we were only going to the Parish Church. Even from the road, we could see why Isabella Hollwell had bequeathed the money for the building of the new one at the centre of the village.  What promised to be a pleasant climb for us on a cool summer morning, would be a vastly different affair for the parishioners in the middle of winter… especially if you happened to be carrying a coffin. 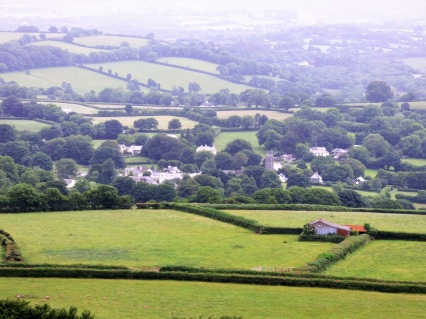 The church of St Michael de la Rupe… St Michael of the Rock… stands on an extinct volcanic cone, over eleven hundred feet above sea level. It is rich in both history and legend, and both have links to our own quest.

The rock is ringed by an Iron Age hillfort that predates Christianity. You can still trace the embankments as they circle the hill, over two thousand years after their construction… though all who make their home within their sanctuary now are the cows and the wild creatures who care little for the history of mankind.

Wildflowers dance in the green, funnel-web spiders festoon the embankments, catching the mist, as the cows watch the path that winds around the hill. There are swallows darting overhead, skimming the breeze with an aerial mastery unmatched.

Rabbits burrow in the churchyard and they are one of the reasons why, although the church is still officially open for burials, there are no new graves. Another reason is the lack of soil atop the hill. The shallow layer of earth meant that the dead were placed in a crypt below the church, but whenever a heavy rainstorm hit the area, the crypt flooded and set the coffins to bobbing around like Halloween apples… 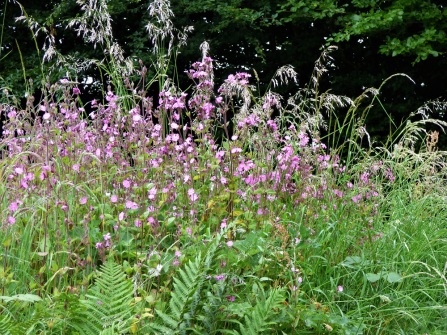 The church was built around 1130 by the Giffards… Norman lords whose forebears had accompanied William the Conqueror when he invaded Britain in 1066. Their loyalty had been rewarded with grants of lands and while Walter Giffard was building one of my own local churches, Robert Giffard built the church atop Brent Tor. At least, that is one story. 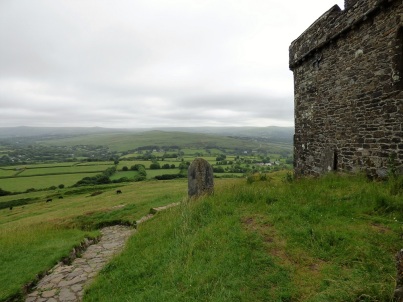 Another tells of a wealthy merchant caught in a dreadful storm at sea, who promised he would build a church on the highest point he could see, if he survived the onslaught of wind and wave. Some say the merchant was none other than Robert Giffard.

Whoever built the church, they took much of the stone from the Iron Age hillfort with which to build it… and it was not built without opposition. In some versions of the story, it was the Devil himself who caused the storm and the merchant survived only when he called upon Saint Michael to deliver the ship from disaster. Keeping his vow, the merchant began to build a church on top of the ancient beacon hill called Brent Tor. 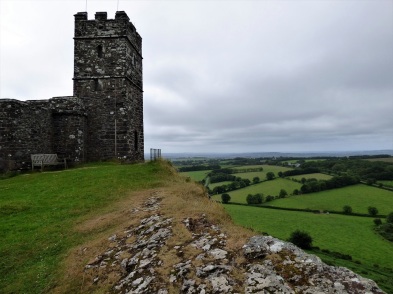 But, every night, the stones would be thrown down by the Devil who wanted no church atop the hill. The merchant, in desperation, called upon St Michael once more and the mighty archangel threw a rock at the Devil, catching him upon his heel and making him flee in pain. Another version, though, says that it was the Devil who threw rocks when the pagan villagers decided to convert to Christianity and build a church at the foot of the hill. They persevered until, during the night, the Devil moved the new building to the topmost point of the beacon, expecting the villagers to cede and give up their new faith, Instead, they decided to leave the church where it was, calling in a bishop to dedicate the church to St Michael who guards the high places. The Devil threw a tantrum, Michael appeared in a blaze of light and threw a stone to cast the Devil out. Whichever tale appeals, and whether you believe the Devil or the Archangel threw the stone, the boulder still guards the entrance to the pathway that climbs the hill.

The church is known locally as The Candle, in memory of the hill’s ancient role as a beacon in time of need. There is some evidence to suggest that the cult of St Michael replaced the earlier worship of the Roman god Mercury in the high places, and that in turn, Mercury had replaced the older Celtic god Lugus or Lugh… who was also a god of light. St Michael’s is still a working church and worship is held there from Easter to Michaelmas. It stands open for prayer and pilgrimage, still a beacon of spiritual light for those to whom its faith speaks… and for those who see all faiths as part of One Light, bearing all names and none.

The church stands on the Michael Line, the ley that runs across the country from Land’s End to the east coast in Norfolk. Dowser Hamish Miller and Paul Broadhurst wrote of their visit to the hill in their book, The Sun and the Serpent:

“The mist grew thick: a strange sense of peace descended. There was an indefinable feeling that we were being observed. On a flattened mound, with the church above obscured by cloud, we found what we had come to think of as a node point, where the current focussed and entered the ground, accompanied by a strangely-shaped pentagram. There was a long period of silence.”

Like over eight hundred other churches built in the high places, the church on Brent Tor is dedicated to St Michael. The leys are also called dragon lines, and St Michael is traditionally the dragon-slaying archangel, though esoteric thought has him bringing the dragon under control beneath the point of his blade, rather than slaying it. 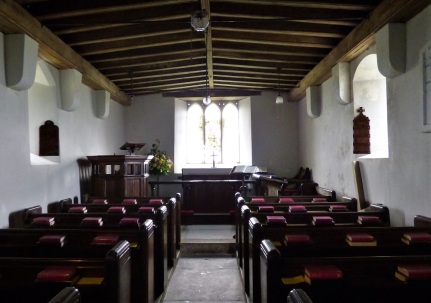 On one level, this may be seen as Christianity subduing the devil or the old pagan religion… or as human nature being brought under the control of the Divine Will… or the bestial aspects of humanity being subdued by the spiritual side of Man… There are many more interpretations of this symbol, and what you see depends on where you have chosen to stand.

The stained glass window in the east, however, shows Michael not with a dragon, but holding the Scales… balancing life and death, good and evil. He looks to his sword, held like a sighting rod, equally and perfectly poised, as if requiring no effort to hold it in his hand. The saint has not always been so serene, though, as lightning damaged the church, somehow missing the depiction of the saint, a few years ago… but what the lightning failed to accomplish, vandals managed when they smashed the window in 2002.

The church is tiny, just big enough to house a small congregation and its memories. An octagonal font stands near the tower in the west and still bears the remnants of the lock used to protect the holy water from theft by medieval witches. 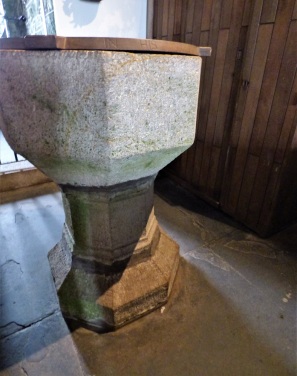 There are a few simple memorials on the walls, testament, once again, to how the violence of war decimates even the most rural of communities.

Significant for us was the passage at which the Bible on the lectern was opened… the Nunc Dimittis, the song sung by Simeon at the Presentation of Jesus. The Simeon story has been weaving its way through our journeys for years.

Significant and mysterious too is the strange dispensation granted to the Abbot of Tavistock by the Pope Celestine III in 1193, when the church is mentioned as Sancti Michaelis de Rupe, and the Papal Bull declared the Abbot exempt from the interference by the Bishop of Exeter – or any other person. So far, I have not been able to find out why…

Add to that the odd sundial dated 1694 that shows an incised figure described as ‘half angel, half imp, wearing a flat cap and having outstretched wings’ and all you can say is that, for a small village church, St Michael of the Rock has an awful lot of stories to tell…

Sue Vincent is a Yorkshire-born writer and one of the Directors of The Silent Eye, a modern Mystery School. She writes alone and with Stuart France, exploring ancient myths, the mysterious landscape of Albion and the inner journey of the soul. Find out more at France and Vincent. She is owned by a small dog who also blogs. Follow her at scvincent.com and on Twitter @SCVincent. Find her books on Goodreads and follow her on Amazon worldwide to find out about new releases and offers. Email: findme@scvincent.com.
View all posts by Sue Vincent →
This entry was posted in adventure, albion, ancient mound, Ancient sites, Books, Churches, Don and Wen, Folk Tale, History, Photography, Stuart France and Sue Vincent and tagged Brentor, Cornwall, legends, St Michael de la Rupe, travel. Bookmark the permalink.

3 Responses to A Thousand Miles of History IX: Legends on the rocks