Our final site of the official weekend workshop was Maiden Castle, an enormous prehistoric structure just outside the Roman town of Dorchester. We gathered in the car park beneath the hillfort and began the climb to its gates.

The name, Maiden Castle, is of debated origin, with some scholars taking it to mean an impregnable or unconquered fortress, while others look to the old Brittonic language and see it as mai-dun, the great hill. Perhaps it is both, but for our purposes, the site was definitely well named and large enough to be the virginal bride of a Giant. 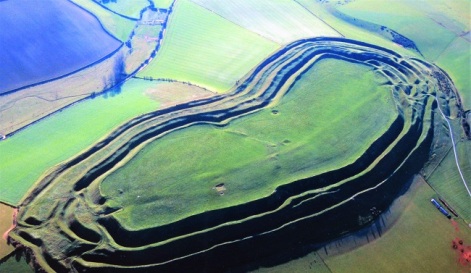 Aeriel view of Maiden Castle; image from photo of information board.

The human occupation of Maiden Castle goes back over six thousand years to the Neolithic era, when the hilltop was cleared of woodland and a causewayed enclosure was built. Finds suggest this was a place of gathering for ritualistic purposes, rather than a settlement at first. There is evidence that stone axe heads were made and polished there and these axes were as much a part of ceremonial regalia and a mark of authority as a weapon. They are found as grave goods in important tombs and were traded across Europe.

The graves of two children were found within the low banks of the enclosure and it is thought the banks were more a symbolic separation, perhaps between the lands of the living and the lands of the ancestors. A little later, a huge bank barrow was built, over eighteen hundred feet long, but which is barely visible today. The barrow may have represented the presence of the ancestors within the community as well as acting as a dividing landmark.

In the Iron Age, a hillfort was built on top of the original structure and later extended to the west to enclose more than double the original area, until it covered more than forty-seven acres. The information board graphically illustrates the sheer enormity of Maiden Castle when it tells you that the summit alone is the size of fifty football pitches. It is the largest hillfort in Britain and one of the largest in Europe.

We entered via the maze… a complex arrangement of deep, steep ditches and high, blind banks. Worn by millennia of weather, the banks have eroded and the ditches have lost their original depth, yet it is still an incredible feat of engineering. Defensively, it is a fabulous way of intimidating, separating and confusing an enemy, but we wondered if that were its only purpose. As a processional way, the snaking progress of torches in the dark would look both impressive and magical as they climbed the hill through the coils of the maze.

Artists impression of Iron Age fort at Maiden Castle, showing the western ‘maze’. Image from photo of information board.

We began there… and all our plans, ideas and research went for naught, as our companions were drawn, this way and that, called to their own explorations and following their own visions and inner prompting. That is as it should be… anything we create for these workshop weekends is designed to encourage that inner voice, so we can hardly complain when our companions hear and follow.

A few of us began to walk around the ramparts, marvelling at the scale of what remains and discussing the history of the site. What began as a small settlement became the largest of its kind in the area, with many roundhouses built in a random pattern. Then, for a short while in its long history, the castle was organised and held under strong leadership. The old homes were demolished, and orderly streets of houses built. The ramparts were strengthened and the community reorganised. Little now remains visible of what was once there, but the inner eye sees beyond time and recreates the conical rooftops, the grazing of goats and kine and the slow swirl of many hearthfires. Where does imagination begin and end? When does conscious thought become unconscious vision? And where is the portal beyond which we cannot see…until we do?

Sue Vincent is a Yorkshire-born writer and one of the Directors of The Silent Eye, a modern Mystery School. She writes alone and with Stuart France, exploring ancient myths, the mysterious landscape of Albion and the inner journey of the soul. Find out more at France and Vincent. She is owned by a small dog who also blogs. Follow her at scvincent.com and on Twitter @SCVincent. Find her books on Goodreads and follow her on Amazon worldwide to find out about new releases and offers. Email: findme@scvincent.com.
View all posts by Sue Vincent →
This entry was posted in adventure, albion and tagged ancient sites, art, geometry, hillfort, history, landscape, legends, Photography, spirituality, symbolism, weekend workshop. Bookmark the permalink.