Our penultimate church was in Batcombe… these days a small and straggling hamlet, seemingly in the middle of nowhere. There has been a church on the site of St Mary Magdalene for nigh a thousand years and very possibly more. It stands in a green valley, far enough from people to make a congregation seem barely feasible. 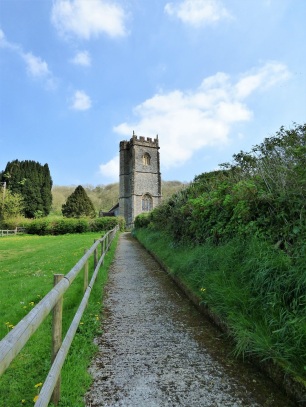 The church boasts a tower taller, in proportion to the rest of the single-celled building, than many grander churches we have seen. Indeed, the first impression you get when you arrive is of the height of the tower and the isolated beauty in which it stands.

The church is a simple one, with the main entrance still being through the base of the fifteenth-century tower, and leading to a nave and chancel. It is a long, narrow building and lacks both ornamentation and stained glass. It is vaguely unkempt, appears almost abandoned… and yet it has a curious tranquillity and a welcoming feel. Of all the churches we visited, this was the one where we felt most at home.

Outside, there is a warmth about the stone and the simplicity of the doorway is inviting. There are gargoyles watching from the four corners of the tower and a pair of heads flank the door.

An odd shield-shaped marking… perhaps a mason’s mark… looks rather like a smiling face, positioned close to the entrance. Around the corner, a fragment of pre-Norman masonry hides amongst the flints on one of the buttresses, suggesting the presence of a Saxon church on the spot, long before the Normans arrived and began building the churches we appreciate so much as repositories of art and local history.

All in all, it is an inviting place. Once inside, the air is cool and ‘clean’ in some indefinable way. The tower walls hold a handful of memorials that show a little of the history of the community. 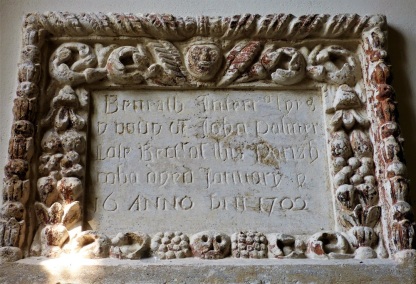 I was particularly taken by the elaborate border of one memorial that combines an angel with fruits, foliage and a skull, as well as the rather startled-looking skull on another that has an almost cartoon-like feel.

The font stands at the back of the church, where the tower meets the nave, and is a curious affair. It has a Norman column with a curvaceous yet cube-shaped limestone basin which is older than the pedestal upon which it stands. There are circles inscribed on the sides of the basin, looking very much like those odd consecration crosses we had found earlier at Cerne Abbas.

There is little to see in the rest of the church at first glance, especially after the wealthier places we had already visited. But look a little more closely and there are still wonderful artefacts to be found.

The fragment of an old screen hides beside the organ. Pews hide an ancient holy water stoup and a rare twelfth-century pillar-piscina, set against a triangular alcove.

A carved stone screen separates the nave from the chancel and an illustrated Bible graces the lectern. The fifteenth-century collar-beam roof is held in place by roof bosses carved with foliage and curves gently over the nave. 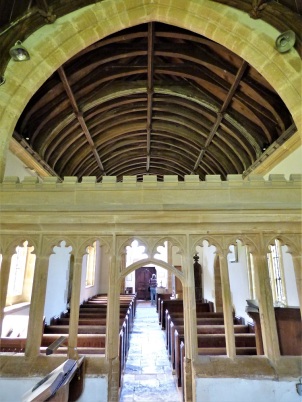 Victorian restorations erased the Minterne Chapel that once held a very curious burial and a bit of local folklore. The local squire was known as ‘Conjuring Minterne’. He dabbled in magic and was regarded with fear and superstition. After setting off to ride over steep Batcombe Hill one day, he suddenly remembered he had left his spell-book open on the table, where his servants might find it.

To save going back by the road, he turned his horse around and spurred it to attempt a massive leap over the church, knocking off the pinnacle as he soared clear over the tower. The fearful villagers were afraid that they might offend the devil by repairing the damage, and bad luck was promised to those who attempted to do so… and for a hundred years they left it alone. When it was repaired, they repaired it at a crooked angle.

It is said that Minterne vowed that he would be buried neither in nor out of the church, so he was buried half in and half out of the Minterne Chapel. The church was redesigned and rebuilt by John Hicks in 1864, and the Minterne chapel was sadly lost. The memorial tablets were repositioned on the north side of the tower and one must wonder if the John Minterne mentioned in the carvings is the conjurer…

A “conjurer” used to be an important character in a Dorset village, and was held in respect. He was supposed to be gifted with supernatural power, which he exercised for good, and by his incantations and ceremonies he could cure many sicknesses.

In another of those curious coincidences, we had assigned this church to Mercury as part of our meditation… and in many systems, Mercury…Hermes… is intimately associated with magic.

The afternoon was drawing to a close and we had one more church still to see, if time allowed, yet it was with some reluctance that we left Batcombe. With its air of quiet, resilient grace and a standing stone hidden in a nearby hedge, it really is a magical place.

Sue Vincent is a Yorkshire-born writer and one of the Directors of The Silent Eye, a modern Mystery School. She writes alone and with Stuart France, exploring ancient myths, the mysterious landscape of Albion and the inner journey of the soul. Find out more at France and Vincent. She is owned by a small dog who also blogs. Follow her at scvincent.com and on Twitter @SCVincent. Find her books on Goodreads and follow her on Amazon worldwide to find out about new releases and offers. Email: findme@scvincent.com.
View all posts by Sue Vincent →
This entry was posted in adventure, albion, Ancient sites, Churches and tagged art, consciousness, geometry, landscape, legends, Photography, spirituality, stained glass, symbolism, weekend workshop. Bookmark the permalink.