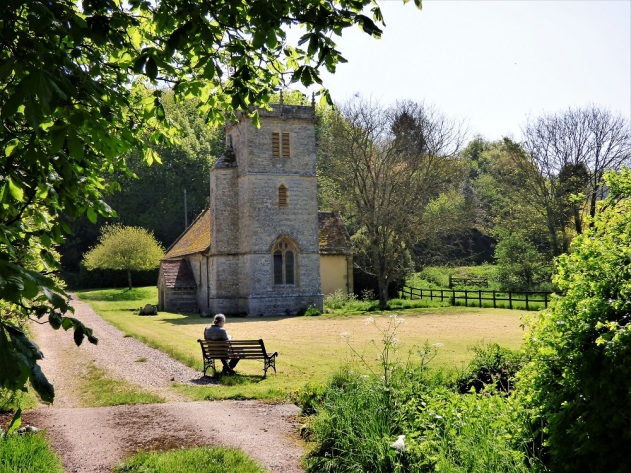 ‘White represents the Crescent of the Soul’…

The little church of All Saints at Nether Cerne is in the most beautiful and peaceful location imaginable. On our first visit, we drove down the tiny country lane that runs beside the infant River Cerne, expecting to find a village. There are only a couple of cottages, a farm and a beautiful seventeenth century manor house… and a sign saying ‘to the church’ which seemed to point between two tracks leading into the middle of nowhere.

Leaving the car, we took the right-hand track, following it behind the manor’s stables, until we found a gap in the wildflowers through which we could see the church. Feeling rather like naughty children, trespassing where we shouldn’t, we followed the hint of a path into the manor gardens. 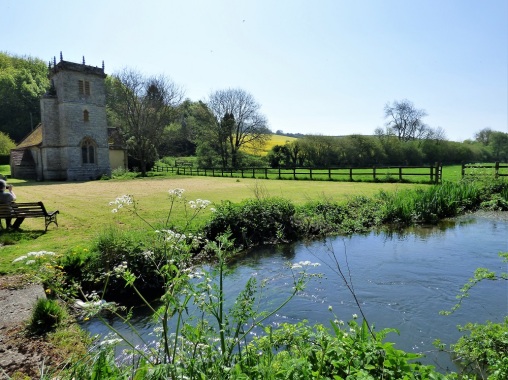 The church is tiny and stands opposite the door to the manor. By contrast, its tower is proportionately huge. There are a handful of graves, including a military grave bearing a carving of crossed rifles, and a feeling of utter peace.

All Saints, though remaining a consecrated place of worship, is a retired church. After eight hundred years, the building is at rest, yet it retains a luminous sanctity and tranquillity matched by few others we have seen. It is a place that simply needs to be felt.

It is surrounded by fields, sheltered by trees and a silence broken only by birdsong and the quiet whisper of the river. We did not expect it to stand open… yet the door swung inwards to allow us entry to a little church that keeps an antler with the candlesticks.

Although it was built in the thirteenth century, it was remodelled two hundred years later. It is a very simple church, seeming bigger on the inside than the outside.

There is little to see at first, just a few stained-glass windows, two of which are superb. The face of the Christ in the East window, above the altar, has faded and lost its features, but the Lamb and the Crucifixion are worthy of any place of worship. 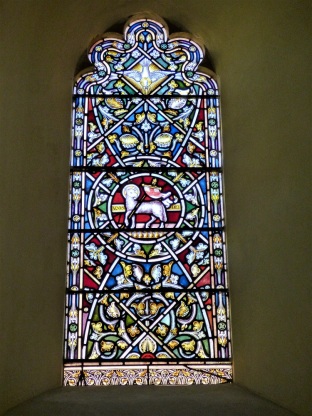 The font is a curious affair, oval, rather than round, and looking rather like half an upturned melon. It pre-dates the present church and may come from a much older building. I cannot find out whether the Purbeck marble font was part of a church already on the site, or whether it was brought from elsewhere, but it appears to be at least nine hundred years old. 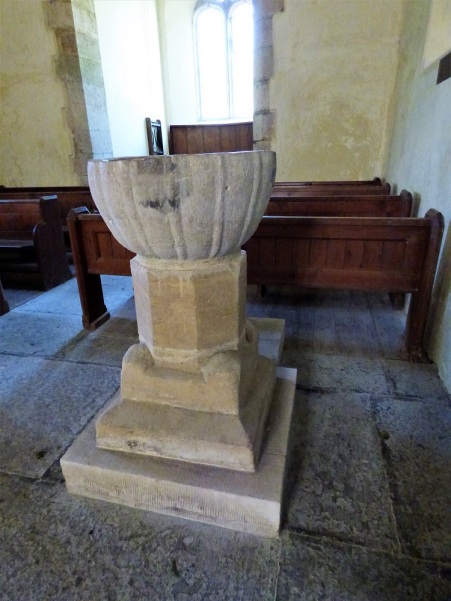 The tower is the most interesting part of the building, with a tiny door leading to the stairs and some curious carvings on the pillars. Small, shield-bearing angels guard the entrance to the tower, but from within, you look up to see an eagle and a tiny dragon.

As we gathered there for our meditation on the planetary colours and seed phrase, it was evident that these could not have been better chosen.

Sue Vincent is a Yorkshire-born writer and one of the Directors of The Silent Eye, a modern Mystery School. She writes alone and with Stuart France, exploring ancient myths, the mysterious landscape of Albion and the inner journey of the soul. Find out more at France and Vincent. She is owned by a small dog who also blogs. Follow her at scvincent.com and on Twitter @SCVincent. Find her books on Goodreads and follow her on Amazon worldwide to find out about new releases and offers. Email: findme@scvincent.com.
View all posts by Sue Vincent →
This entry was posted in adventure, albion and tagged ancient sites, art, church, churches, consciousness, geometry, landscape, legends, Photography, spirituality, stained glass, symbolism, weekend workshop. Bookmark the permalink.