The reason Stuart and I were heading south on our thousand-mile journey through the ancient places of Albion was one of the Silent Eye’s regular workshops in the landscape. The Giant and the Sun: Patterns in the landscape was due to begin in the tiny village of South Cadbury in Somerset, and that weekend was very much part of our journey. We manage to unhurriedly see and do so much on these weekends that it has become a regular comment that we must somehow stretch time… but this particular weekend was going to test that particular idea to its limits… 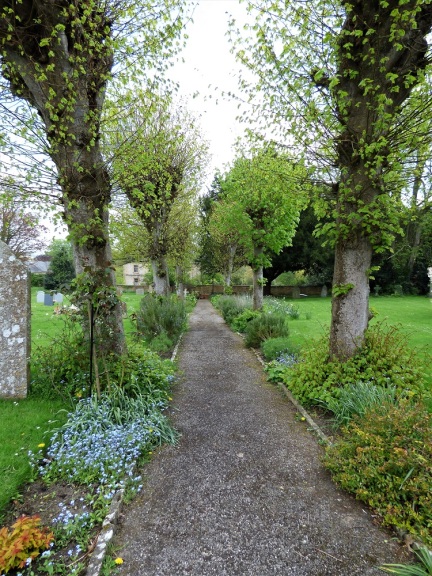 Every workshop needs a place to start, and with companions arriving from as far apart as Cumbria, London and America, you need to meet somewhere that is easily found. We knew full well that if we converged on the village pub and started talking we would never have time to visit the place we had come to see, but instead of meeting at one of the most intriguing places, where mystery, history and legend come together, we decided to meet at the church.

Old churches are interesting places. They provide not only a window on the social history of an area, but a snapshot of the growth of their community. You can get a real feel for a place by visiting these little churches that have grown with their congregation over the centuries, and often they reveal glimpses of a far distant past, much more ancient than Christianity. 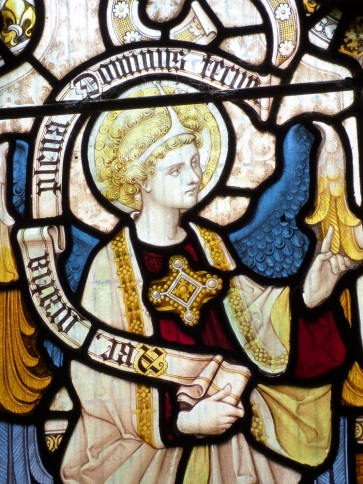 The setting we have chosen for our meeting is rather idyllic, especially when the flowers and trees are in bloom. There are birds everywhere… a good many corvids… and a magnificent yew tree that casts shadows over the churchyard… a perfect place to meet old friends and new. 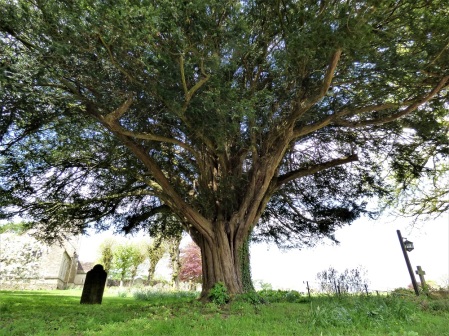 The church of St Thomas à Becket serves the little village of South Cadbury in Somerset and it is built on the slopes of the ancient hillfort. There is no way of knowing when the first church was built here, but it was probably Saxon, as by the time the village was recorded in the Domesday Book of 1086, there was already a priest and a church of some importance. 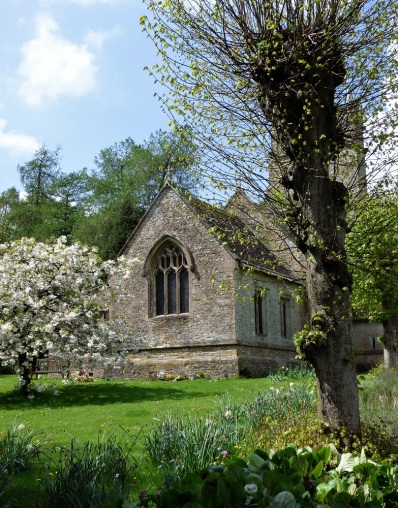 The first recorded vicar was Peter de Burg in 1265. Curiously, this means Peter ‘of the hill’ or ‘of the castle’… a wholly appropriate name, given the situation of his benefice. The church is dedicated to St Thomas à Becket, the Archbishop of Canterbury who was murdered in 1170 and canonised two years later. Inside the church there is a medieval wall painting, showing a red-headed bishop, tucked away in one of the old window embrasures, which may be a depiction of the saint. 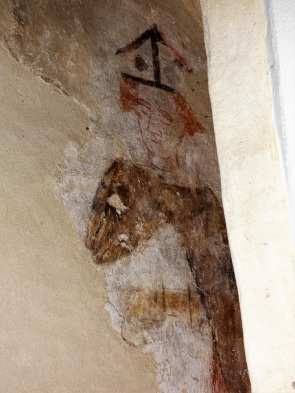 The current building dates largely from the 13th and 15th centuries, with the arcade and tower arch being built around 1280 and with all the inevitable Victorian renovations and additions. The Tower was added in the 14th century and is protected by some rather curious creatures.

The air is cool inside and has that faint aroma of damp stone, beeswax, fading flowers and forgotten incense that seems to typify these village churches. Overhead the ceiling arches white, supported by blue-painted beams and gilded figures holding heraldic shields. The freshness of the gold and blue are doubtless modern, but the vaulted ceiling has sheltered the congregation for five hundred years.

The font, sadly, is more modern… no more than a hundred and fifty years old. There is no trace of an older font in or around the church. Many of these little places have fonts that go back to the original buildings, where generation upon generation have been baptised and I find it a little sad to see that link broken.

The pulpit too is Victorian, but here you begin to see traces of the older layout of the church. Beside the pulpit is an odd little alcove. Looking closer, we could see the curve of an old staircase, long since gone. This was the stairway that led to the rood loft, the gallery above the rood screen that once separated the chancel and altar from the congregation. After the Reformation, these screens, surmounted by the Rood, a depiction of the Crucifixion, were removed, demolished, whitewashed or cut down, both to remove the ‘abused images’… images and carvings that were thought to smack of superstition and idolatry… and to remove the separation between the altar and the people. In many old churches, though, the staircase to the rood loft still survives, appearing to lead to a doorway to nowhere. 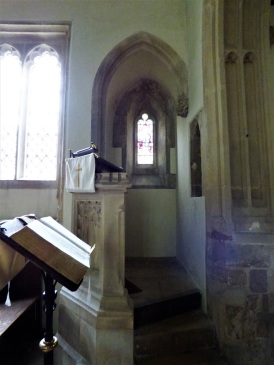 Older features also include the remnants of a medieval piscina, the basin in the wall into which holy water was poured after the service, that its sacred properties should not leave the church walls or fall into the hands of unscrupulous practitioners of ‘witchcraft’.

The squint, or hagioscope, still remains too. These odd-looking ‘tunnels’ are always angled through the internal walls that separate side chapels from the chancel and were made to allow worshippers in the side chapels to see the rasing of the Host during Mass. It should be remembered that all of our oldest churches were Catholic until the Reformation, when Henry VIII broke with Rome. The Anglican Church is simpler in the forms of its worship…but not so very different in essence. 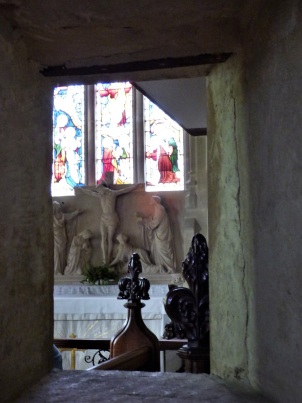 I have to wonder if, in fact, the essence of religious belief or personal faith has ever been very different. The vision we weave of the creation of all things may differ and shift over the ages, as do the names, faces and stories of our gods, teachers and saviours, but we have always sought a point of origin, an ultimate destination and a pathway between.

Because the quest and its questions are universal, quite often the symbols and iconography of one paradigm can illuminate those of another. Symbols are not literal depictions, even though they may at first appear to be so. In spiritual terms, a symbol speaks to the heart rather than to the mind, pointing us towards ideas that cannot be transmitted as knowledge, but which must be intuited and understood rather than known.

Over the course of the weekend we would be working with a symbol and looking at the patterns in the landscape from ancient to historical times. Setting the known aside, we would attempt to feel our way forward… sometimes picking out anomalies and seeing what they suggested, sometimes finding the parallels between ancient and modern thought and seeing whether we could apply that to harmonise our own lives.

Symbolism is a natural means of communication. Before the majority could read or write, images bypassed the need for literacy and enabled abstract ideas to be shared. We have lost the habit of working with symbols… or we think we have. We all recognise road signs and trademarks. We look at a word and know the sound, the meaning, and all its emotional connections and implications… yet a written word consists of letters… each letter a symbol in its own right. It takes very little to start reading more from an image than it appears to show… we just need to look beyond logic and ask the question. 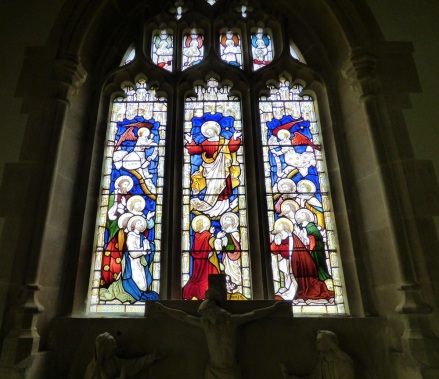 Why, for example, are there only men in the depiction of the Ascension behind the altar, while only women are present at the Crucifixion on the carved reredos below it? Traditionally, it was the disciples who witnessed the Ascension… although there is a biblical reference that suggests that Mary may also have been present. On the other hand, the bible mentions a number of men attending the Crucifixion. 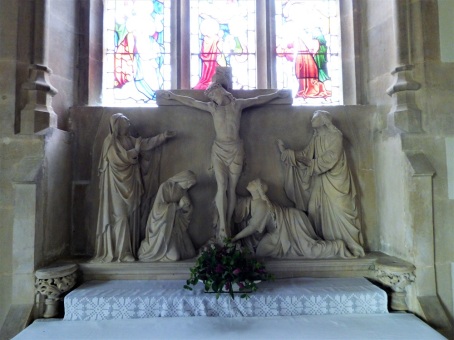 Is this no more than coincidence or artistic licence? Quite probably… but treat it as a symbol and ask the question and it sparks a chain of intuitive ideas and possibilities. Legends, folklore, myths and stories can be approached in the same way… and will yield more than they seem to hold on the surface. It is not a question of right or wrong answers… sometimes there are no answers, only more questions. And sometimes the answers we find cannot be framed in words. It doesn’t matter. What matters is allowing yourself to step off the treadmill of habit to see and feel your world from a new angle… and we were going to be doing a fair bit of that over the course of the weekend…

Sue Vincent is a Yorkshire-born writer and one of the Directors of The Silent Eye, a modern Mystery School. She writes alone and with Stuart France, exploring ancient myths, the mysterious landscape of Albion and the inner journey of the soul. Find out more at France and Vincent. She is owned by a small dog who also blogs. Follow her at scvincent.com and on Twitter @SCVincent. Find her books on Goodreads and follow her on Amazon worldwide to find out about new releases and offers. Email: findme@scvincent.com.
View all posts by Sue Vincent →
This entry was posted in france and vincent, Photography and tagged consciousness, history, landscape, medieval wall paintings, somerset, south cadbury, spirituality, symbolism, The Silent Eye, village church, weekend workshop. Bookmark the permalink.