In a plastic bucket beside the counter sat a dozen roses, each one individually wrapped, slightly faded, but with their heads held firmly erect in the stiff plastic. Each one would doubtless be bought and, given their garage location, probably as an afterthought, along with the milk and petrol, and taken home to a loved one as a token. For many, that would be the extent of their expression of devotion for another year. For many recipients, it would mean the world. It was a sad sight.

On the 14th of February, across the western world, florists, jewellers and confectioners make a commercial killing, as lovers and hopeful romantics celebrate St Valentine’s Day. Few of us are immune from interest in this date. Some pay court and show their hearts to a loved one, some stand firmly in the camp that sees the celebration simply as a money-making scam, while many believe that one day a year should not be the only time love is shown to another. Whatever stance you take, the chances are that you have a strong opinion about the day.

We know little of either St Valentine or the origins of the celebration. The legend of the saint seems to be drawn from three separate lives, all sharing a remarkably similar dénouement. In all three, the good Valentine is held in captivity and heals the sight of a blind girl, impressing his captor, whose daughter she is. Some versions go on to say that the man converted to Christianity after the miracle, smashing pagan idols and freeing slaves. Another story says that Valentine was arrested for marrying Christian couples and preaching his faith… both illegal activities in the early days of the Church. Even so, it is related that he earned the respect of the Roman Emperor Claudius… until Valentine tried to convert him too. In the typical fashion of such stories, the saint refused to deny his faith and suffered the threatened fate… he was stoned and when this failed to kill him, was finally beheaded.

The date of his martyrdom became his feast day… and the day when, for some reason, we choose to celebrate romance. Valentine eventually became the patron saint of beekeepers as well as engaged couples, happy marriages and love, and he is called upon to help fainting, plague and epilepsy. He was never officially canonised by the Church, but became a saint by popular acclamation and so was removed from the General Roman Calendar in 1969. His religious feast day continues to be kept locally, while the legend of his name is celebrated worldwide, with few knowing or caring about the reality or the origin behind the custom.

For a long time the general consensus was that St Valentine’s Day was a convenient replacement for the pagan rites of Lupercalia. The name of the god, Lupercus, derived from the word for ‘wolf’ and he equated to Faunus, a Pan-like shepherd-god, whose image once stood in the Lupercal… the cave where the she-wolf suckled Romulus and Remus, the twins who founded Rome. The rites were ancient, probably pre-dating Imperial Rome, and connected to the fertility of spring. It was not an uncommon practice to supplant such ancient festivals with something more palatable to the Church, allowing traditional celebrations and holidays to become approved holy days.

Another theory ascribes the romance of St Valentine’s Day and its association with courtly love to Geoffrey Chaucer, suggesting that the customs described in his 14thC Parliament of Foules are part of that work of fiction, rather than the more ancient customs they appear to be to the reader. Yet a third explanation looks no further than the old belief that it is in mid-February when the birds choose their mates. The concept of joining together might come in through the pagan rites but whatever the truth of the legends or the origins of the festival, there seems little to inspire our devotion to hearts, flowers and romance in either a beheading or the earthy rites of a fertile spring.

Looking a little deeper, though, there is something to see. We begin with a goat-footed god, representing the inner workings of the forces of Nature that sustain life. Then, tracing the modern concept back to the medieval idea of courtly love, we come upon the idea of ‘noble love’… a more spiritual concept of romance than we understand today and one that needed no consummation, but was, instead, a source of inspiration. In truth, however, such noble love still sought something for itself, if only approval. Then, in the story of Valentine, we have a man to whom the love for and of his god was dearer than life. 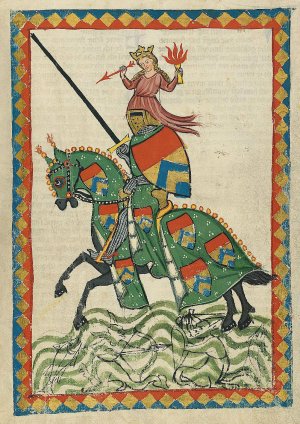 Perhaps we do St Valentine’s day an injustice when we dismiss it out of hand; perhaps too, with our rosily romantic gifts and gestures, we are seeking to express something inexpressible, in the same way that a child might deck itself in mother’s lipstick and gauds, reaching towards an adulthood it does not yet understand, but can dimly observe.

From the immense forces of Nature that drive life to perpetuate its vehicles, to the incredible, beautiful complexity of how her systems interact and entwine with each other in an inextricable embrace, the world around us speaks in a physical language of love. We can understand that dance… we too are physical creatures and part of that design, subject to its forces and compulsions. Although we have, over the past few centuries, preferred to see our animal nature as something base and to be escaped from into some airy realm of sanctity, we cannot, while we are in the world, escape the truth of our every atom. And why should we try? Is not Nature a more beautiful and intricate system than anything man could hope to create? The interdependency of all life on our planet speaks to me of love.

The ideal of the courtly love that inspires, seeking nothing for itself, but only to find expression in art, deed and devotion… that speaks to me of a higher aspect of the same forces. The compulsion is the same as that felt by the stag, rutting in the forest, yet Man has choice and free will, the ability to raise his response to those same forces and act beyond desire and self interest.

St Valentine’s choice took that one step further, if looked at literally; laying down his life for his beliefs in an act of principled sacrifice. With such a hazy set of stories, though, and ones that are echoed in the hagiographies of the saints and in our myths and legends so many times, it is entirely possible that we were never meant to take the stories literally. Undoubtedly they stood as examples of faith to the faithful, but regarded symbolically, they may be conveying a different idea… especially when the head is seen as the seat of the human personality… that of offering the egoic self to a higher ideal.

It may be that the love we know as human is a beautiful but pale reflection of something greater that we are, as yet, too small to know, but which sows the seeds of understanding, giving us a chance to learn to love without grasping or seeking to hold what must be free… letting us perceive a shadow of something greater that runs through the universe. The Sufi poets write of the relationship between the Lover and the Beloved, speaking of a journey that encompasses the whole of manifested creation and yet which can be travelled only within the human heart, using the language of earthly love to shadow forth that Love which is a oneness with the One. The feast of St Valentine may have more to reveal than whether or not someone will send us roses.

Images from the Codex Mannese,

a medieval songbook produced in Zürich in the early 14thC.

Sue Vincent is a Yorkshire-born writer and one of the Directors of The Silent Eye, a modern Mystery School. She writes alone and with Stuart France, exploring ancient myths, the mysterious landscape of Albion and the inner journey of the soul. Find out more at France and Vincent. She is owned by a small dog who also blogs. Follow her at scvincent.com and on Twitter @SCVincent. Find her books on Goodreads and follow her on Amazon worldwide to find out about new releases and offers. Email: findme@scvincent.com.
View all posts by Sue Vincent →
This entry was posted in Love and tagged Chaucer, courtly love, love, lust, reality, romance, secret meanings of ancient myths, Sex, spirituality, St Valentine, Sufi Beloved, symbolism. Bookmark the permalink.

16 Responses to Beheading the Rose