Rites of Passage: Beyond well…

Our last ‘official’ site for the day was Mompesson’s Well. The small, stone-capped well-housing sits in an enclosure above the village of Eyam, on the old salt road that once joined Sheffield to Cheshire. The well is fed by a stream and we had hoped that its pure waters would symbolically wash away the taste of grief after plunging ourselves into the dark history of the plague.

Mompesson’s Well, renamed in honour of the clergyman who had convinced the village to quarantine itself in 1665 when the plague had struck, was one of the places where money and goods were exchanged during the village’s self-imposed isolation. Money was left for supplies for the plague-ridden village, and the coins washed in the water in the belief that it would prevent infection. There are still coins left at the well today, though whether that is in homage to its history or part of an older tradition of leaving offerings by sacred springs is debatable.

The plague in Eyam lasted for fourteen months. The quarantine was lifted a little while after the death of the last victim of the pestilence, farm worker Abraham Morten, had died on the first of November 1666. It must have been a time of both hope and terror as the village held its breath, waiting to see if he were indeed the last.

Figures vary from source to source about how many people were living in Eyam when the plague first struck and how many died. The church holds records of two hundred and seventy three deaths, but that may not be the full total. While one source claims there may have been around seven hundred villagers at the start of the plague, many seem to agree on a mere three hundred and eighty. Either way, the loss is a staggering proportion of the population and no-one would have been left untouched by loss.

Yet, without their chosen actions and self-sacrifice, the plague would have undoubtedly spread, not only to the villages immediately surrounding Eyam, but thence to the towns and cities such as Bakewell, Buxton and Sheffield where poverty and the density of the population would have spelled disaster.

The quarantine was no empty gesture. The villagers knew that through their choices, most were condemning themselves and their families to a painful and horrible death. There was no effective treatment for the plague in the seventeenth century, but while tens of thousands were dying every week in London, in Derbyshire, the comparatively low death toll  is due to the sacrifice of this one village. 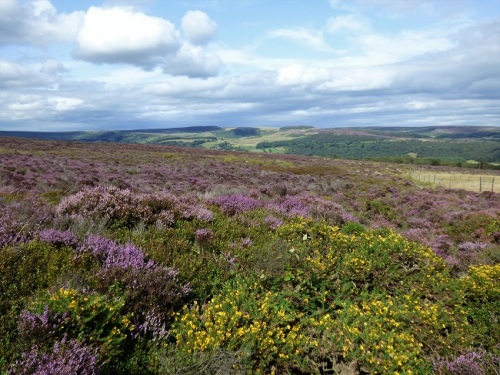 And yet, there is, in spite of their actions, and in spite of the vibrant internal life of the modern village, still a heavy taste of old fear hanging over Eyam. Even the atmosphere of the well did not feel truly clean… it was not the place to end our day. It is not always enough to heal the body; old pain leaves its scars and its ghosts. Instead, we followed the road up onto Eyam Moor, where older inhabitants had built stone circles thousands of years ago and where the air is clear and clean.

We had begun our afternoon together with a visualisation, placing our work within a circle of Light. High on the moors, amid the last of the heather, we offered what light we shared for the healing of old pain.

All that remained for us to do was to return to base. We had booked a table for dinner at the Queen Anne in Great Hucklow, the inn that has seen us every year during our April ritual workshops. The pub, just three miles from Eyam and built in 1621, is just a few years older than the story of the plague. There was something rather comforting about its familiarity at the end of such an emotional day. And sometimes, warmth and friendship are all it takes to make the world right.

We had been lucky with the warm weather too… a beautiful autumn day. As we watched the sun go down from the pub’s garden, we were hoping for fine weather for the next day too… for we would be spending it high on the moors with the stones…

Sue Vincent is a Yorkshire-born writer and one of the Directors of The Silent Eye, a modern Mystery School. She writes alone and with Stuart France, exploring ancient myths, the mysterious landscape of Albion and the inner journey of the soul. Find out more at France and Vincent. She is owned by a small dog who also blogs. Follow her at scvincent.com and on Twitter @SCVincent. Find her books on Goodreads and follow her on Amazon worldwide to find out about new releases and offers. Email: findme@scvincent.com.
View all posts by Sue Vincent →
This entry was posted in Spirituality, The Silent Eye and tagged bubonic plague, Derbyshire, eyam, eyam moor, great hucklow, history, landscape, mompesson's well, psychology, Rites of Passage:Seeing Beyond Fear, sacred sites, spiritual journey. Bookmark the permalink.

2 Responses to Rites of Passage: Beyond well…