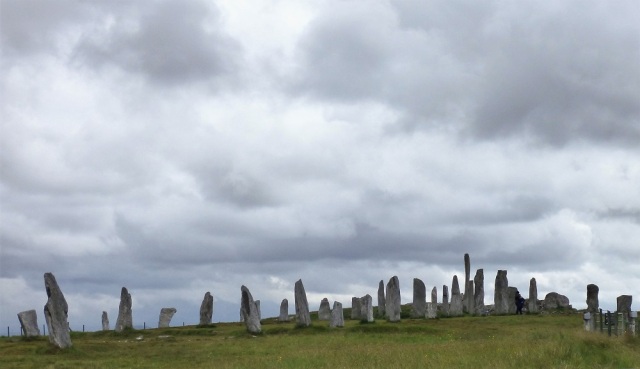 “Oh good grief…”
“I can see it…”
The distant silhouette of the great stones of Callanish were unmistakeably outlined on the horizon. In spite of all the challenges, including fully-booked ferries, deflating tyres, a distinct lack of beds, food and coffee, we had made it…and made a dream come true. And, as if to reward our perseverance…
“There’s a café…”
“Cool!”
“…and llamas…”
“You’re joking…”

My passenger cast his eyes to the heavens in mock-despair, but did not challenge the assertion. The first time I’d ‘found’ an unexpected llama in an unlikely place, he hadn’t believed me… until we got close enough to see and meet Lammas, the sheep-herding llama on the North Yorkshire moors who had given us directions to a sacred site. This time, however, I was wrong… as we drove closer, we could see that they weren’t llamas after all. Just their smaller cousins, alpacas. Which was close enough for me. But coffee and creatures could wait. There were stones to meet first.

The official car park by the recently built visitor centre was full. There were even coaches. This did not bode well. We never expect to get the great ancient sites to ourselves… but we live in hopes that they will prove to be quiet. I tried a little side road, looking for somewhere to park, and we found ourselves face to face with the stones at last. And, in spite of the number of people milling around, it almost seemed quiet… the collective presence of the stones dwarfed the ephemeral presence of humankind.

And so it should. Around five thousand years ago, a ring was marked out as part of a ritual landscape. Over the next hundred years or so, a stone circle was erected, to which was added an avenue, three stone rows and a central monolith, creating the basic shape we know today…that of a slightly skewed Celtic Cross, a symbol that would be borrowed by Celtic Christianity over three thousand years later.

At the base of the monolith, which stands nearly sixteen feet tall, but only a foot thick, and in the centre of the circle, a burial chamber was added. This was not for a single, important interment, but would be used by the people of Tursachan Chalanais for several hundred years. 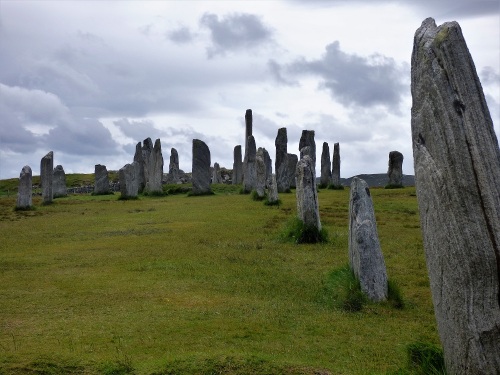 I always feel that I have to give a glimpse of both history and dimensions when I write about these ancient places, saying, for example, that the avenue is 273 feet long, or that the central monolith weighs around fifteen and a half thousand pounds. You have to give things context and scale.

I could speak of how the stones, referred to by seventeenth century locals as ‘false men’ turned to stone by an enchanter…were set up so that the chief priest could address the tribes from their centre. Or how Toland identified the stones as the Hyperborean circle mentioned by Diodorus Siculus.

I could even tell how the stones were buried and lay sleeping beneath a layer of peat five feet deep until they were uncovered and their full height revealed once again in the nineteenth century.

But honestly? We were not thinking of dates, facts and figures. In spite of all the parked cars at the visitor centre, we had the place almost to ourselves…at least to begin with. We were not speculating on purposes and alignments. We were just bouncing with excitement… and overwhelmed by the sheer beauty of the stones, both collectively and individually, and their setting.

Like a fine jewel, the eye is drawn to the stone, but it is the setting that holds and presents the gem… and is itself a thing of beauty. Beyond the stones, the loch and the hills had their own stories to tell. There would be time to look closer…but for now, all we could do was marvel and, as the low, grey clouds scudded overhead, take advantage of the lack of rain to take photographs.

After decades of wondering if we would ever see the place, the unlikelihood of our ever getting back there again meant that, without discussing it at all, we were documenting the site as best we could. We learned a long time ago that, in the excitement of the moment, we miss a great deal… but the camera can pick up the slack.

We learned how best to document an ancient church, for example, knowing that if we never went back there, we would have every nook and cranny captured and anything the eye had missed, the camera would usually record as part of a process that leaves the mind free to wonder and the heart free to feel its way into a sacred place.

And so we wandered and wondered, taking photographs of every stone from several angles, gasping and drawing each other’s attention to stones shaped like figures and faces, animals and hands. Exclaiming at the crystalline structure and the patterns of flowing and folded stone.

It was too much. Overwhelming. There was no way we could process such a vast and incredible place all in one go… and especially not when another coachload of tourists were disgorged onto the grass. We retired to the strange hump outside the walls to sit, in apparent invisibility, until the place quietened down once again.

Sue Vincent is a Yorkshire-born writer and one of the Directors of The Silent Eye, a modern Mystery School. She writes alone and with Stuart France, exploring ancient myths, the mysterious landscape of Albion and the inner journey of the soul. Find out more at France and Vincent. She is owned by a small dog who also blogs. Follow her at scvincent.com and on Twitter @SCVincent. Find her books on Goodreads and follow her on Amazon worldwide to find out about new releases and offers. Email: findme@scvincent.com.
View all posts by Sue Vincent →
This entry was posted in adventure, albion, Ancestors, Ancient sites, Don and Wen, france and vincent, Photography and tagged Callanish standing stones, landscape, Outer hebrides, road trip, sacred sites, Scotland, sites, Skye, Stuart France and Sue Vincent, travel, Western Isles. Bookmark the permalink.