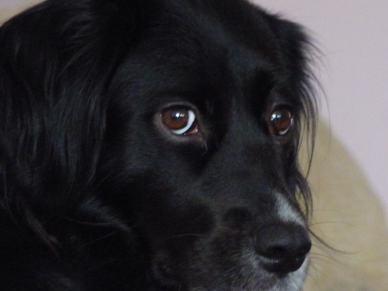 She’d been out for ages, and when she finally came home I was really glad to see her. Sometimes I worry that she won’t come back, though she has never left me too long on my own. I have my toys and the fish to keep me company, and loads of birds to watch, so it isn’t too bad. To be honest, these days, I usually just sleep a lot while she is out… that way, I am wide awake for walks and ball throwing when she is home.

And I was expecting my walk, ‘cause it had been too early when she went out… even I was still asleep, and I get up with the sun. But, “No,” she says, “We’re getting company.” Well, we hardly ever get company, so I was a bit excited, ‘specially when she put the leash on and took me out to wait for them.

Well. One of my boys turned up! And he’d brought his little two legs with him! So, I admit, I was a bit bouncy… and, the little two-legs isn’t very used to bouncy dogs. She was a bit scared too, so after I’d given my boy lots of hugs, they put me in the kitchen.

Now me, I didn’t think that was fair, ‘cause how is the little two-legs ever going to get used to me if I can’t play with her? But I could hear them feeding the fish and the little one told my boy that he should come and keep me company. So she might be scared, but she was still thinking about me, and I got lots of cuddles in the kitchen, while my two-legs and her grandpup watched the fish.

But, maybe my two legs knew what she was doing, ‘cause after a few minutes, she filled up both my puzzles with treats and put me back on the leash. Then me and the puzzles went back into the living room. Those treats smell good… and they are made of chicken… so I was happy to sit and give a paw so I could have them… even though I have to work all those wheels, flaps and levers to get them out. The little two-legs thought it was funny watching me… but she still squealed and backed away when I went to say thank you. 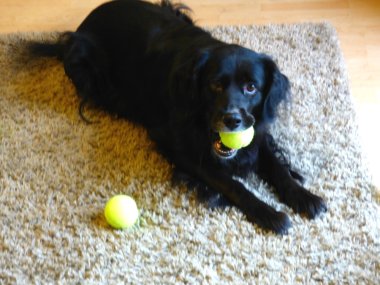 Then my two-legs took me outside the window and let me off the leash. She started throwing balls for me in the garden and after a while, the little two legs wanted to throw them too…as long as I didn’t get too close.

Then, bless her, she asked if she could give me some more treats… so I was really good and did my best sit and paw for her! And then she threw the ball some more.

I was gentle… I like small things… and by the time they were getting ready to go, the little one wanted to stroke me. She would only stroke my rump… even though my two legs says that end is the most dangerous. No idea what she could mean…

Then, when we went out with them to the car, the little one finally stroked my ears… and after that, we were friends.  In fact, if she’d had her way, we would have all gone for a walk together, to see the cows and sheep on the farm.  Her dad said ‘next time’… and that’s fine by me! 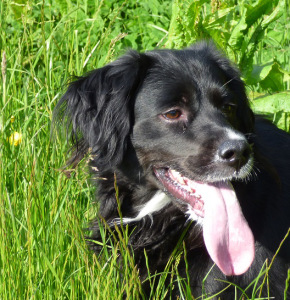 Being on your best behaviour is exhausting, you know. And it has nothing to do with me getting old, either. No matter what some people might say… Mind you, that backfired a bit, ‘cause my boy asked how old I was now, and when she told him, he was surprised how old I was, but said, “So, equivalent to about your age then…” Ha!

Anyway, I’m dog-tired and it has been a long day… so I think a cat-nap is in order…

Sue Vincent is a Yorkshire-born writer and one of the Directors of The Silent Eye, a modern Mystery School. She writes alone and with Stuart France, exploring ancient myths, the mysterious landscape of Albion and the inner journey of the soul. Find out more at France and Vincent. She is owned by a small dog who also blogs. Follow her at scvincent.com and on Twitter @SCVincent. Find her books on Goodreads and follow her on Amazon worldwide to find out about new releases and offers. Email: findme@scvincent.com.
View all posts by Sue Vincent →
This entry was posted in Dogs, Friendship and tagged Ani, grandchildren, scared of dogs, small dog. Bookmark the permalink.

61 Responses to Notes from a small dog… Making friends