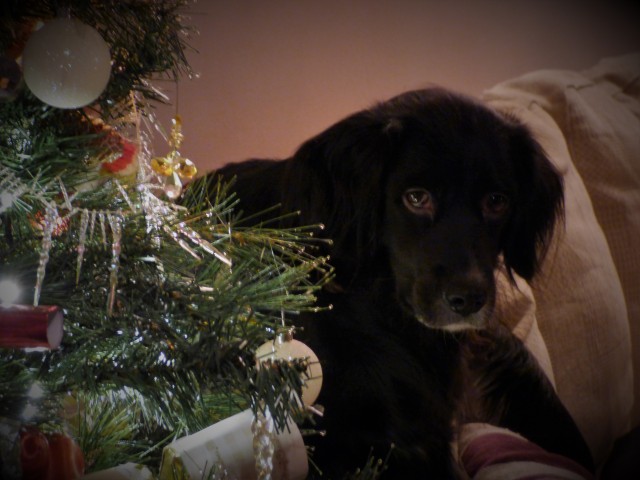 Long, long ago, my kin began to tell stories, passing down the history of our kind from dam to pup. This is the Long Memory of our kind. Your kind have it too, but more and more, you forget how to look within and read what is written there…

One story tells of when the world was still young and cold winds brought the ice that bites and freezes. Food was scarce, the pack was hungry and the old and the very young were failing. My ancestors saw the glow of fires, warm against the snow and drew close. Hiding in the shadows outside the camp, they watched as you cooked a deer and fed your people. One by one, they watched you curl beneath your furs and fall into dreaming until none remained wakeful save one young boy.

He sat motionless, leaning on a spear and gazing into the distance. My people crept closer, hiding in the deepest shadows, drawn by the smell of meat and the warmth of the flames. One female, bolder than the rest, drew closer still. The boy froze, watchful, his hand tightening on his spear, but he made no move. She crept out into the pale light, poised for flight, her yellow eyes holding the blue ones of the two-legged creature.

Slowly, very slowly, never taking his eyes from hers, the boy reached into the ashes around the fire and found a bone still rich with meat. He tossed it towards the her and sat back, once more motionless.

She watched, fearful and distrustful of these strange creatures… and yet, there was something… something she did not understand… that passed between them, eye to eye. Need prevailed and she inched closer, barely moving, each pawstep taking an eternity, until she stood above the bone.

The two-legs smiled… it was a strange expression, unlike the wide grins of her own kind, yet it reassured her. She took the bone and backed away into the bushes carrying it to her young.

Night after night she returned, and night after night he fed her the scraps from the ground around the camp until she began to trust. When he hunted, she followed… and although he made no sign, he knew that she watched and left part of his kill for her. When he slept, she watched over him as if he were one of her own young.

That was the beginning. Kindness, gratitude and trust. Others followed where she led, scavenging the scraps from the camps, killing the rats that also followed where the two-legses passed and feasting on their flesh. We changed, our faces broadened and we learned your words. Your kin and mine learned to read each other’s expressions until, many years later, we lived together, guarding each other, helping each other to hunt and survive in the bleak winter of the world.

It was a relationship that helped both our kinds. Love came later, when we protected your children and you healed our ills… and it still endures.

When I was very small and still with my brothers and sisters, our mother told us the stories of our people and that, one day, the  two legses would come to take us away from each other. There was no sadness in her words… it was simply what would be. But, she told us, we had to choose wisely, and choose for them, because we could see more than they knew and would know their need better than they did themselves.

Then, she came, with her boy. He was not very well… and she was tired and sad inside, though she smiled at us as we played. I recognised her straight away. I heard her telling my mother’s two-legs how she had grown up with Irish Setters and she kept watching my brother, who was all red and setterish… but I knew that she was mine to look after.

I was only very small, but I waddled over to where she was sitting on the grass, playing with a lapful of puppies. I looked deep into her heart and saw there another dog, one she had loved very much, and who had looked just like me. The same ears, the same markings, all black with a white bib and feet.  I saw in her heart the memory of the first time they had met… and, like that puppy before me, I rolled onto my back by her hand and looked deep into her eyes. They sparkled and leaked… and I knew that we would be going home together. 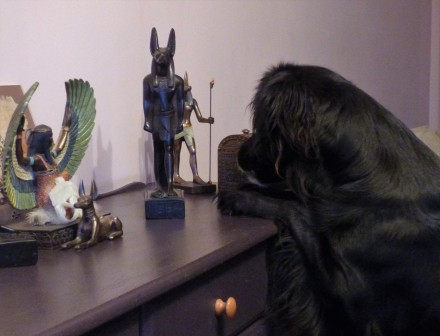 She calls me that… and many other things… but mostly, she calls me ‘small dog’. Not because I am small, as I am not… and anyway, she has no room to talk on that score. I am just ‘smaller’ than the dog who went before and whose empty place in her heart I have filled with love.

Thank you for sharing my Advent Calendar this year…

Me and my two legs would like to wish you all a magical Christmas  filled with love.

Sue Vincent is a Yorkshire-born writer and one of the Directors of The Silent Eye, a modern Mystery School. She writes alone and with Stuart France, exploring ancient myths, the mysterious landscape of Albion and the inner journey of the soul. Find out more at France and Vincent. She is owned by a small dog who also blogs. Follow her at scvincent.com and on Twitter @SCVincent. Find her books on Goodreads and follow her on Amazon worldwide to find out about new releases and offers. Email: findme@scvincent.com.
View all posts by Sue Vincent →
This entry was posted in Ani's Advent Calendar, Dogs, Photography and tagged domesticated dogs, love, story. Bookmark the permalink.