A Thousand Miles of History XXXIX: The balance of power… 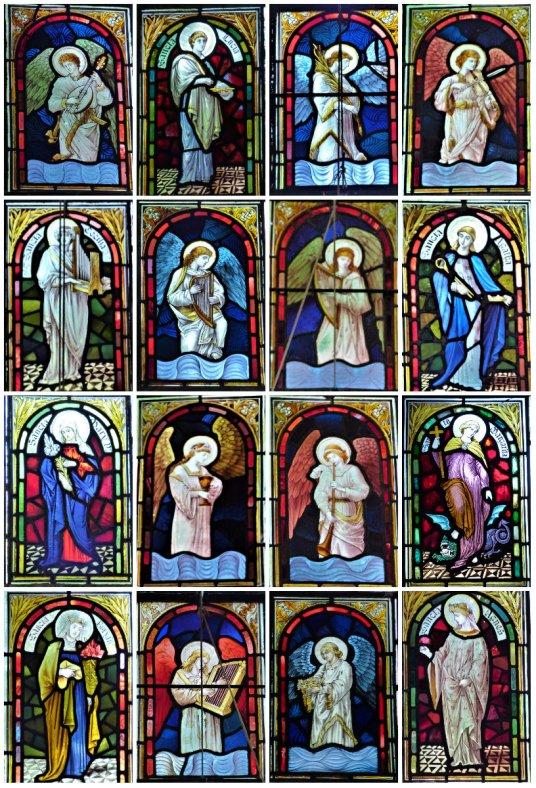 The church in St Cleer may be dedicated to St Clarus, the missionary saint who fled to France to escape the importunate advances of an amorous noblewoman, but at first glance, that seemed to be one of the few nods that masculinity gets within its ancient walls. We did not know at the time that the village was on the Mary Line, the feminine counterpart of the St Michael ley, but we ought to have guessed, given the plethora of women that gazed at us from the stained glass, the carvings and the textiles. 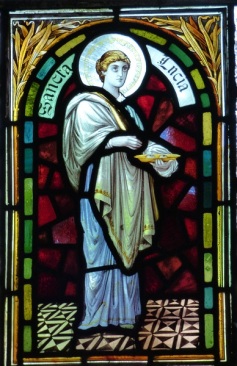 Appropriately enough, it was a woman who greeted us as we entered, turning off the vacuum cleaner so that we could explore in peace, and sharing with us snippets of history and local knowledge and directions to the holy well we wanted to visit before leaving the village. 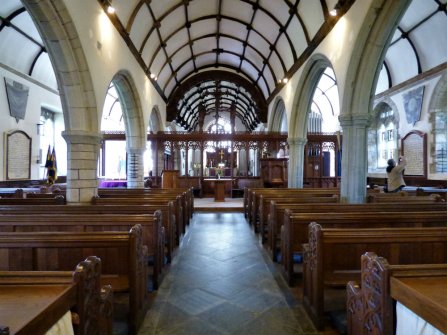 If ever a church were to celebrate the Divine Feminine, this was how it could be done. Even the angels which are technically genderless looked feminine…even those that might have been intended to be male. 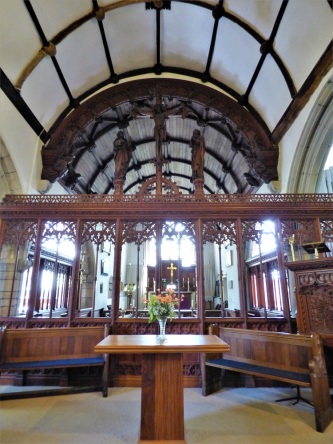 The church is bright an airy. Most of the windows are of largely plain glass, with inset panels depicting female saints and martyrs accompanied by an angelic orchestra and angels bearing the symbols of sainthood and, for the Virgin Mother, the Crown of Heaven. 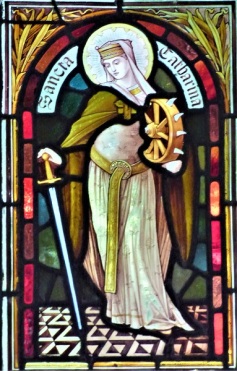 Some, like St Buryan, after whom a Cornish village was named, are ‘local’ saints, while others, like St Margaret of Antioch with the dragon from whose belly she escaped, are better known. We found many of ‘our’ saints amongst those pictured, those whose names and stories crop up time and again in our research, including St Catherine with her wheel… who had been making her presence felt  since our early morning ritual at the Silver Well in Cerne Abbas a few days earlier. 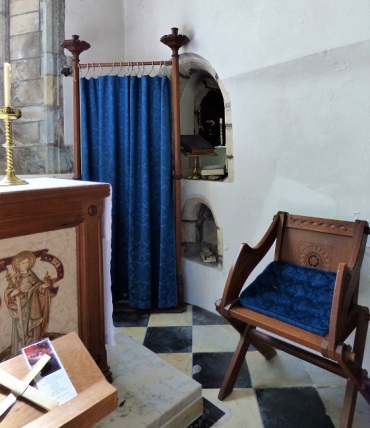 In the Lady Chapel, a statuette of the Holy Mother and Child is flanked by candles and the altar bears finely embroidered saints… Lucy, Agatha and Hilda of Whitby with her snakes. Behind a blue screen, you can still see the old aumbry, where the elements of Communion were kept and the piscina where any surplus holy water was given back to the stone.

The chancel floored in black and white marble… the chequerboard design common to so many temples of the Mysteries… has a more traditional window, by Clayton and Bell, showing scenes from Jesus’ life, including, appropriately enough, the raising of Jairus’ daughter. In the small lights above the main panels, we once again see the sword-wielding archangel, Michael, whose name asks a question, “who is like God?“ 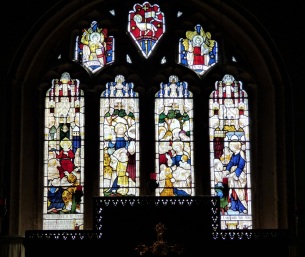 The most recent window was installed in 2014 and is the work of designer David Whittley , made by Alan Endacott. It was donated by British newscaster, Gordon Honeycombe, just prior to his death and celebrates three centuries of his family in Cornwall. It shows St Petroc, one of Cornwall’s patron saints and the ill-fated martyr, St Clarus, whose refusal of the noblewoman’s advances cost him his head. 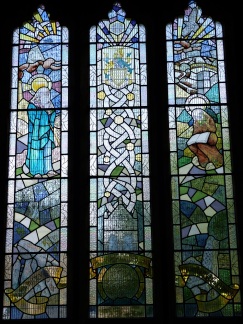 A final traditional theme is the window showing Faith, Hope and Charity, personified as women. While they hold the Sacred Heart, the Chalice and the Palm, they do so beneath the gaze of the All-Seeing Eye. No surprise to see this and other Masonic symbols in a church of this standing… 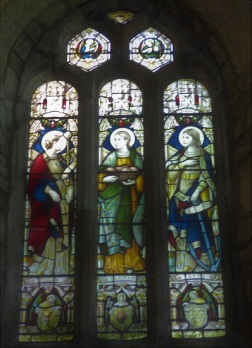 Most of the magnificently carved woodwork is nineteenth century, including the wagon roof and altar screen. The beams are flanked by angels in the chancel, but I would have loved to have the time and equipment to photograph all the corbels and bosses. 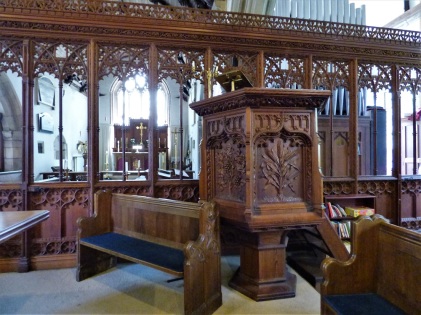 At each intersection, there are carvings and some of them are very curious indeed, reminiscent of many of the misericords we have seen, as well as the medieval bosses found both in the great cathedrals and some of our small village churches. 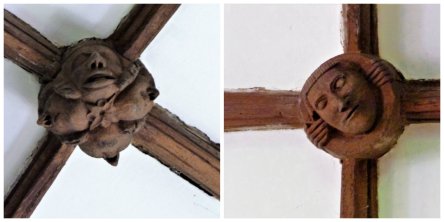 Behind all this, the Norman font stands quietly in the west, still baptising the children of the village after eight hundred years. The font, with its intimate involvement in the lives of the people of the parish is always a symbol of continuity to me and I am always glad to see these survivors from an earlier age at the heart of a church. Many older fonts were lost, destroyed or buried throughout history, so to find them still in service, or restored to their rightful place, is always a joy. 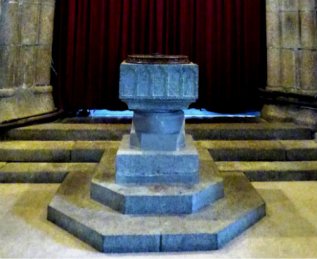 All in all, the church was a good one by our standards. Although local wealth was clearly displayed, especially in the very earliest and the Victorian additions, so was local care from the community. The woodwork gleams, the flowers are fresh and you can tell that the place still has a place within the life of the village. 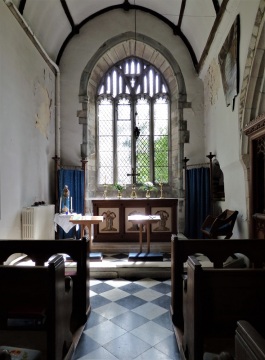 It was interesting to see so many feminine forms throughout the church and even more so when we eventually realised the presence of the Mary Line in St Cleer. This concept of ‘masculine and feminine’ though is often misunderstood when being spoken of in symbolic terms. It does not refer to men and women…although that is one level on which it manifests. It refers to polarity and can take as many forms as there are polar opposites in form, force or function. 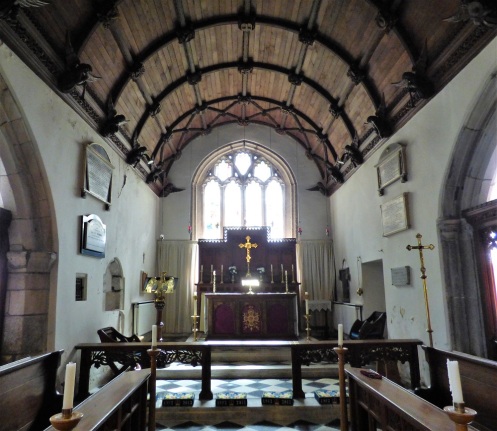 It is only when two forces are poised in ‘opposition’ that balance is achieved, and only when they are balanced can they join to create something new. The feminine force is receptive, the masculine force dynamic and while the outer form may suggest one of the poles, the inner force may be quite different… which is one of the reasons why, when the patriarchal view began to take precedence, the idea of the Divine Feminine was suppressed. It isn’t easy to run a patriarchy if everyone recognises the inner strength and dynamism of Woman. 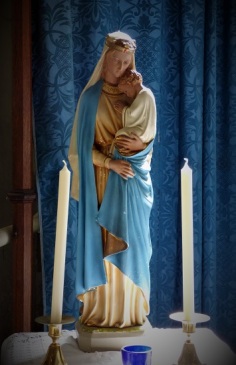 Today the pendulum is beginning to swing in the opposite direction, with many embracing and promoting the Goddess in all Her forms and manifestations, with too many forgetting that the Divine Masculine is required in equal measure for Her to function at all. It is not surprising that a church held for centuries by the Knights Hospitaller should embrace a distinctly feminine iconography, for although they were Knights of St John, they held the Holy Mother in particular reverence.  And perhaps, in embracing that balance of power, they showed a wisdom we would be well to follow. 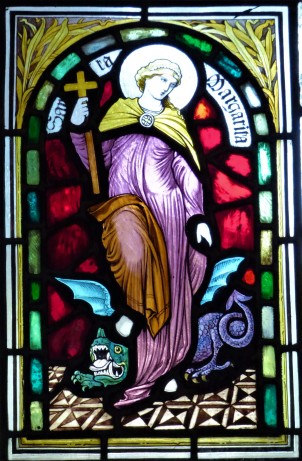 Sue Vincent is a Yorkshire-born writer and one of the Directors of The Silent Eye, a modern Mystery School. She writes alone and with Stuart France, exploring ancient myths, the mysterious landscape of Albion and the inner journey of the soul. Find out more at France and Vincent. She is owned by a small dog who also blogs. Follow her at scvincent.com and on Twitter @SCVincent. Find her books on Goodreads and follow her on Amazon worldwide to find out about new releases and offers. Email: findme@scvincent.com.
View all posts by Sue Vincent →
This entry was posted in adventure, albion, Books, Churches, Don and Wen, dragons, Goddess, historic sites, Photography, Stuart France and Sue Vincent, symbolism, travel and tagged Cornwall, Divine Feminine, Knights Hospitaller, norman church, St Cleer, stained glass. Bookmark the permalink.

18 Responses to A Thousand Miles of History XXXIX: The balance of power…