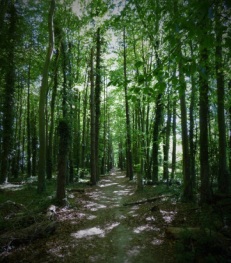 She had been through here hundreds of times but today, for some reason, it gave her the creeps. Served her right for watching that British murder mystery last night. She had sworn off watching those types of shows because they were dark and made her uneasy. But, she didn’t want to come across as a Scaredy cat. Plus, she wanted to impress Roland, the new guy in school.

Everyone seemed to think he liked her but she wasn’t as sure. He looked at her a lot, though and was always singling her out when she was with her friends. Still, she didn’t want to get her hopes up just yet. She’d been burned before by another guy who she thought checked for her but it turned out that he was only interested in one thing and when she didn’t give it to him, he dropped her like a hot potato. It took weeks for her to get over him although her friends kept telling her that he was a jerk, not worth pining over. And they were right, of course. The last she heard of him was that he had gotten a cheerleader pregnant and had to drop out of school to support her and the child. That could have been her although, she would like to think that she was a lot smarter than that.

Roland was a lot different from all the other guys. He was quiet but engaging once you got to know him. He was very smart too. They talked about all sorts of things and had similar interests. He didn’t talk much about his family, though. He was an only child who lived with his mother. His father died when he was twelve under very mysterious circumstances. Many people thought that his death was suspicious but there wasn’t any evidence to prove that. Some even intimated that it was his wife who had done him in.

Continue reading at Notes to Women

Sue Vincent is a Yorkshire-born writer and one of the Directors of The Silent Eye, a modern Mystery School. She writes alone and with Stuart France, exploring ancient myths, the mysterious landscape of Albion and the inner journey of the soul. Find out more at France and Vincent. She is owned by a small dog who also blogs. Follow her at scvincent.com and on Twitter @SCVincent. Find her books on Goodreads and follow her on Amazon worldwide to find out about new releases and offers. Email: findme@scvincent.com.
View all posts by Sue Vincent →
This entry was posted in photo prompt, Photography and tagged British, family, friends, murder mystery, School, shows.. Bookmark the permalink.

2 Responses to The New Guy ~ Notes to Women #writephoto