Reblogged from Notes from the U.K.:

The mayor of Genoa wrote to the queen recently, demanding the back rent on England’s flag, the St. George cross.

I’ll come back to that, but first let’s talk about the flag itself. It’s a red cross on a white field and if you’re not British you may be thinking of the wrong flag. This isn’t the red, white and blue one with crosses and Xs running every which way. That’s Britain’s flag. We’re talking about England’s.

Here’s how it works. England is a nation. Britain, however, is the country that the English nation’s part of. Think of England as a ping-pong ball. Now think of Britain as the fish tank someone threw the ball into at a fair. Someone who had good aim and won a stuffed goldfish and walked away happy, leaving England inside the British fish tank. 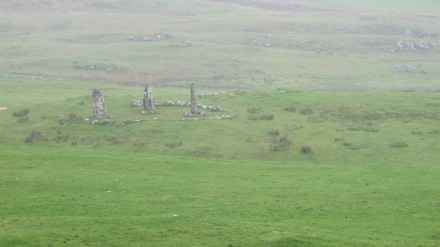 Irrelevant photo: Yeah, any serious blogger would show you a picture of the English flag. This isn’t a flag. It isn’t even England. It’s a stone circle in Scotland.

Continue reading at Notes from the U.K.

Sue Vincent is a Yorkshire-born writer and one of the Directors of The Silent Eye, a modern Mystery School. She writes alone and with Stuart France, exploring ancient myths, the mysterious landscape of Albion and the inner journey of the soul. Find out more at France and Vincent. She is owned by a small dog who also blogs. Follow her at scvincent.com and on Twitter @SCVincent. Find her books on Goodreads and follow her on Amazon worldwide to find out about new releases and offers. Email: findme@scvincent.com.
View all posts by Sue Vincent →
This entry was posted in reblog and tagged English flag, patron saints, St George, St. George flag. Bookmark the permalink.

7 Responses to England, St. George, and the flag ~ Ellen Hawley