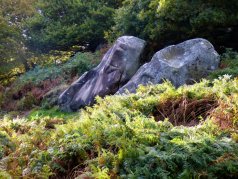 Jake saw Dani standing in a gorge between two cliffs holding Witherbrand in her hand. Her blade was covered with blood and she was surrounded by bodies.

The seven-year-old looked around but couldn’t see his brother or sisters, that is, until he looked closer at the dead people on the ground.

She turned and stared at him, but her eyes were so different. Pale, blue orbs gazed at him with malevolence, and she grinned like a predator who had just spied fresh meat.

“What are you doing?”

She wasn’t in a hurry. The teenager strolled almost casually in his direction. Her armor wasn’t what he had given her after his dream. It was red and black, like the demon’s armor, like Sahkr’s.

“Get back! What did you do to Mandy?” Her body was the closest one to him, lying on her face in a pool of blood.

Continue reading at Powered by Robots

Sue Vincent is a Yorkshire-born writer and one of the Directors of The Silent Eye, a modern Mystery School. She writes alone and with Stuart France, exploring ancient myths, the mysterious landscape of Albion and the inner journey of the soul. Find out more at France and Vincent. She is owned by a small dog who also blogs. Follow her at scvincent.com and on Twitter @SCVincent. Find her books on Goodreads and follow her on Amazon worldwide to find out about new releases and offers. Email: findme@scvincent.com.
View all posts by Sue Vincent →
This entry was posted in photo prompt, Photography and tagged #writephoto, children's fantasy, Davidson children, demons, dragonrider, dragons, magic, shay, Sue Vincent, Thursday Photo Prompt. Bookmark the permalink.