Solstice of the Moon: A last adventure

It is not every day that you can go on a real adventure to see a genuine, bona fide mystery, but that is exactly what we were going to do on the last day of our trip. We had been promising ourselves a bimble with our friend, James Elkington for a long time and finally, we had the chance to do so. The weather was windy and overcast, but at  least it was dry as we set off…for the time being.

James is a fabulous photographer and a man who loves the moors around Ilkley as much as I do… and knows them far better than I. My knowledge goes back to childhood and is rooted in love and long-ago memories. James lives close to these moors and knows them intimately.

Which is just as well, because we were looking for something very small and very well hidden in a vast sea of heather and bracken that would seem featureless to many eyes. Even James, who knows where to look, would have trouble… But first we had to get there and it was going to take a while.

We met on a blustery morning at the Cow and Calf rocks. This part of the moor is often busy, it is a popular place with climbers, tourists and casual walkers. It is also surrounded by ancient sites…rock carvings, cairns and stone circles, all within easy reach of the cafe and car park. The vast majority of visitors to these moors stay within sight of the road and seldom venture above the first ridge. We were going deep into the heart of the moors, far beyond anywhere I had walked since my youth.

‘A bimble’ sounds gentle enough, but don’t let it fool you… we walked for seven hours and a goodly number of miles, all told… and it was wonderful. We revisited many of the sites we have used during Silent Eye workshops on the moors over the past few years, but I also saw places I had not seen in decades. 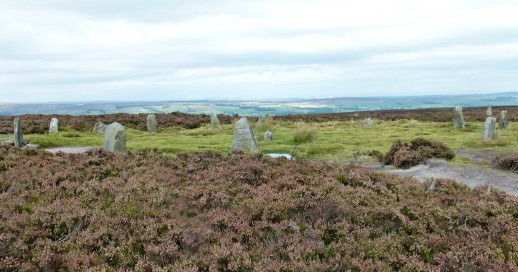 It is a landscape I love with all my heart. I will not detail the route we took or the places we visited…because of the site we were heading for. I have written so much about these moors and their archaeology that I would be repeating myself for the umpteenth time.Suffice it to say that our route left the main path behind and headed off into the bracken. 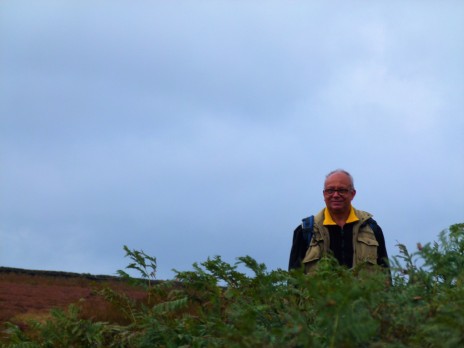 The bracken was still high, the heather still held at least some of its colour and, where the old heather had been burned to manage it for the grouse shooting, new  shoots were still flowering purple. I hate shooting for sport and had to curb my tongue when we were ‘shepherded’ away from the shoot by the gun-toting, bloody-handed young man. But it is possible that it is only the shooting rights that have preserved these ancient, magical and archaeologically important moorlands. 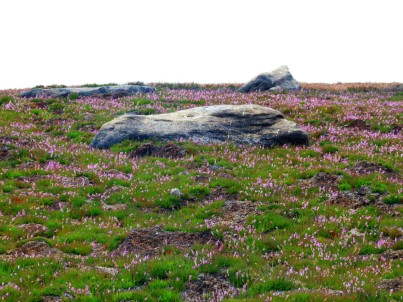 There is a greater concentration of neolithic carvings here than anywhere else in the country…there are literally hundreds of carved stones,as well as standing stones, stone circles, ancient tracks, settlements and burial mounds… it is all there… 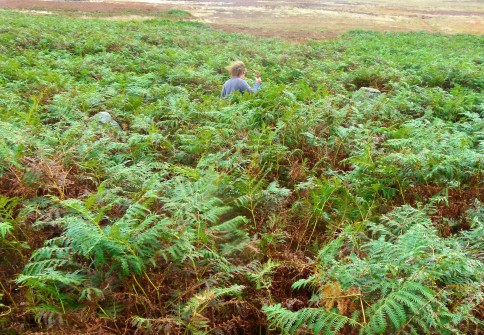 It can take a bit of finding, though, especially when the bracken is high. One stone circle, unseen since my childhood, I was determined to find… and thanks to James, I did. It is one of the oddest places on the moors here and has a very strange feel to it, even though the bracken has now taken over its outline and the stones can barely be seen within the greenery, unless you get right in there with them.

You could spend a lifetime exploring these few square miles and never find everything they hold. One man who has done pretty much just that is writer and antiquarian, Paul Bennett. Paul, whom I am yet to meet, has an unparralleled knowledge of the ancient sites of the moors. It was he and his brother who first found the site many years ago…

To be continued tomorrow …

Sue Vincent is a Yorkshire-born writer and one of the Directors of The Silent Eye, a modern Mystery School. She writes alone and with Stuart France, exploring ancient myths, the mysterious landscape of Albion and the inner journey of the soul. Find out more at France and Vincent. She is owned by a small dog who also blogs. Follow her at scvincent.com and on Twitter @SCVincent. Find her books on Goodreads and follow her on Amazon worldwide to find out about new releases and offers. Email: findme@scvincent.com.
View all posts by Sue Vincent →
This entry was posted in adventure, Books, Don and Wen, History, Moors, mystery, Photography, Sacred sites, Solstice of the Moon, Stuart France and Sue Vincent, travel and tagged anomaly, Ilkley moors, James Elkington, mysterious archaeology, Paul Bennett, tunnel, walking, yorkshire. Bookmark the permalink.

46 Responses to Solstice of the Moon: A last adventure