Elusive realities… and an invitation to share your stories 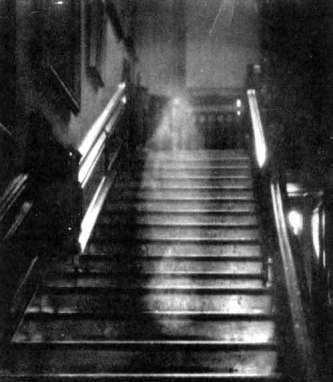 In 1936, Country Life magazine captured this image said to be the Brown Lady while visiting Raynham Hall, England.

Whether we believe in alternative realities or not, we have no guarantee that we are not experiencing them all the time. How would we know if the man we just passed in the street is real or not? If the sound we heard in the night really is just the plumbing or the creaking of the house? How can we know for certain that the imaginary friend of a child exists only in their imagination? And what is imagination anyway, if not the gateway to another reality?

Almost everyone has a story to tell about some strange occurrence that set them wondering, gave them the shivers or brought them comfort. For many such instances there are undoubtedly perfectly rational explanations and for the rest, there is always disbelief.

Technically, I suppose you could call me a sceptic, not because I do not believe in the possibilities of other realms, other levels of existence, or those gifts lumped together under the name of psychism. I cannot do other than believe in what I, myself, have encountered. But I can and do question the nature of our definition of the supernatural and paranormal.

The two terms have become overlaid and frequently tarnished by their fantastical and fictional portrayal in books and films over the years. We seem to have a fallen foul of a fascination with the ghoulish and gory tales of vampires and zombies, forgetting that such things may have a basis in this reality we call home, though not in the way the media would have us believe.

Paranormal is defined as something beyond the scope of known scientific laws. Supernatural refers to something above or beyond what is considered to be natural or normal and which science cannot explain. Science, while we are defining terms, is the systematic study of the structure and behaviour of the physical and natural world through observation and experiment.

Consider it possible that science, which is making new discoveries every single day that change the way we view the world and ourselves, does not yet have all the answers. Science is a continuing exploration, not a fait accompli. How can it be expected to explain what it does not yet understand?

I think that, one day, science will be able to explain many things it currently consigns to the realms of superstition and brands with derogatory terms. I also believe that there are some mysteries that will always lie beyond the reach of the scalpel and microscope, remaining outside the regimented discipline of physical science.

Science is very good at labelling, categorising and filing things so that we can work with what we do understand. Take electricity, for example. The dictionary defines it as ‘a form of energy’ and goes on to state the circumstances in which it arises. We still do not know what it really and truly is. We do know, however, how to create the circumstances in which it arises, how to harness it and put it to use.  A computer is just a bit of metal and plastic without tapping in to the electricity supply… but then it can carry my mind out to roam the world in search of a communion of knowledge, friendship and beauty. Is that not as strange and wonderful as anything we class as paranormal?

Psychism, for want of a better word, is defined as relating to ‘faculties or phenomena that are apparently inexplicable by natural laws’. The italics are mine. The old couple who have lived together for decades may appear to read each other’s minds but may in fact be using a perfectly explicable combination of empathy, habit, body language, sensory input and familiarity to be able to finish each other’s sentences. But is that level of connection, that ability to read each other, beyond the norm…almost paranormal?

There is also much scope in this ‘unprovable’ area for sensationalism, delusion and  dishonesty. There have always been those who seek to have the spotlight of attention turned on themselves and who will stop at nothing to obtain it. There have always been those willing to prey on the vulnerable and exploit the emotions. There are also those who are completely and utterly honest in what they experience and what they do. For every  charlatan who gives the area a bad name, there are hundreds and thousands of untold stories of true experiences that pass the confines of normality and show us a glimpse beyond our limited vision.

There are may instances of such connection with another human being and with ‘something’ that seems to come from somewhere else. Some people appear more gifted than others at this type of communication or vision. I firmly believe it is not a special gift, but a genuine and universal human trait. Just as we can all make a mark on paper with a pencil, but few of us will ever be a Da Vinci, and while we can all sing a song, but not all of us can hold a tune, we all have access to these extended senses, but some have a natural talent that takes them beyond the norm.

Most of what we encounter and file under the labels of paranormal, supernatural and psychic experiences have a perfectly natural explanation… we just have not yet fully recognised or understood what ‘natural’ truly encompasses. I personally believe that our ability to experience can extend far beyond the physical senses. Through lack of conscious use, we have, in general, little control over what these extended senses may show us and no frame of reference when something breaks the barriers of our perceived reality. Suddenly confronted by the unknown, we are left with experiences that transcend the parameters of normality.

As individuals, we are often drawn to the accounts of such experiences. For some, there is no more than curiosity, from others, they invite disbelief and sometimes ridicule. For many more there is comfort in knowing that such experiences are not isolated incidents and that their own such encounters have echoes in those of others.

I have watched with interest lately the comments that have appeared after several articles were published here and on other sites. When I wrote of an out of body experience in A Ghost of Myself, when Adele Marie Park – Wisps of vision and when D. G. Kaye shared her Messages from Beyond, there were so many stories that were hinted at in the comments, that I would like to issue an invitation…

I am not looking for sensationalism or fictional tales… but I think it would be both useful and reassuring to others to realise that none of us are alone in these strange encounters and experiences and perhaps we can open discussion on what they may be or may mean.

Already Shehanne Moore has agreed to share the haunting of her home and D.G. Kaye will share her visit to her father beyond the bounds of life.

Sue Vincent is a Yorkshire-born writer and one of the Directors of The Silent Eye, a modern Mystery School. She writes alone and with Stuart France, exploring ancient myths, the mysterious landscape of Albion and the inner journey of the soul. Find out more at France and Vincent. She is owned by a small dog who also blogs. Follow her at scvincent.com and on Twitter @SCVincent. Find her books on Goodreads and follow her on Amazon worldwide to find out about new releases and offers. Email: findme@scvincent.com.
View all posts by Sue Vincent →
This entry was posted in Dreams, Life and tagged alternative realities, birth, death, family, ghosts, loved ones, paranormal, psychism, supernatural, telepathy. Bookmark the permalink.