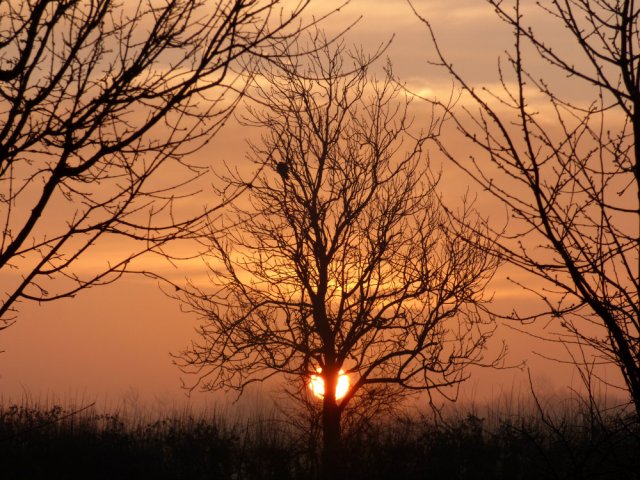 I’d already been out and checked the garden, long before the sun came up. Everything was fine. I could smell where the nightly intruders had passed, but there is nothing unusual about that… the fields at the back of the garden have some really interesting creatures wandering about in them…even now the cows are living inside for the winter. But as the sun came up, she let me out again. Well okay, technically, she grabbed the camera and went out, squeaking like she does… and I just followed. The birds had already invaded… and there was this white thing on the grass. 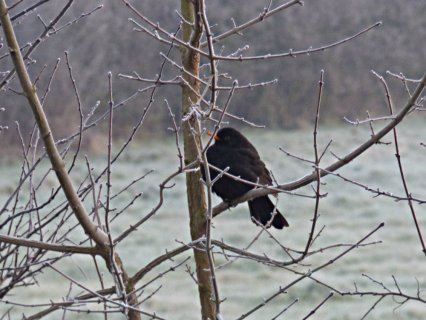 Well, you know, I had to investigate. “Put it down,” she says. How does she see with her back to me? “It’ll be the crow,” she says. Now, crow is big. I don’t mess with crows as a rule… though I have words with them through the window sometimes. It wasn’t a crow though… it was a big lump of bread and I happen to be partial to bread.  Whoever it had belonged to, I knew who it belonged to now. 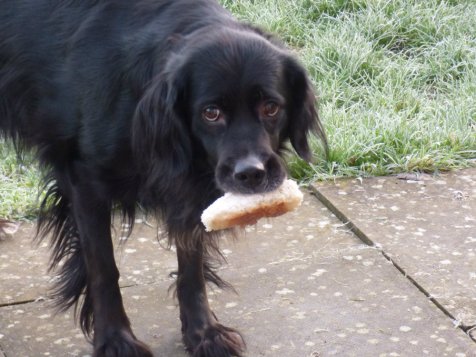 There wasn’t a crow in sight. Just the blackbirds and the sparrows that live on the roof. Personally, I have a feeling the pesky sparrows were responsible… they just sit up on the edge of the tiles there and torment me all day long. She calls it singing… she obviously doesn’t speak sparrow. You wouldn’t believe the things they say! I saw them watching… 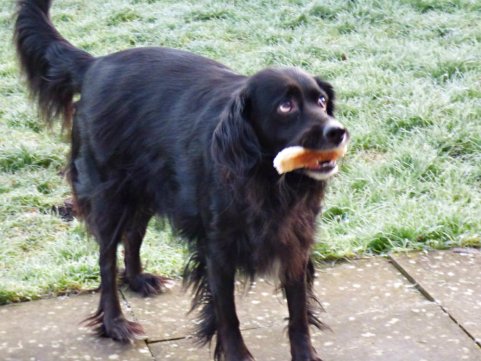 So, while she’s still oooh-ing and ah-ing at the sunrise and the birds, I thought I should do something about the bread. Fat blackbird seemed none too pleased at me picking it up… but frankly, if it eats much more, it won’t be able to take off. It looks like it ate a tennis ball! 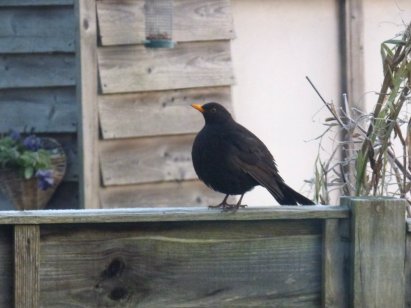 Anyway, in the interests of a tidy garden, healthier blackbirds and just in case the sparrows got any ideas, I thought I should do something about the bread. She puts stuff in the compost bin all the time, so that seemed like a good place to bury it. While I was doing that, though, I suddenly remembered all the other stuff I’ve buried and thought I ought to check on it. You never know…foxes, badgers, rabbits… there’s all sorts of marauders willing to dig your stuff up! Now she says that if I’m going to play ‘finders, keepers’, the rules apply to me and my stuff too . Which I s’pose is fair….but I bet it is just an excuse for when she digs my stuff up. And that usually ends up in the compost too… 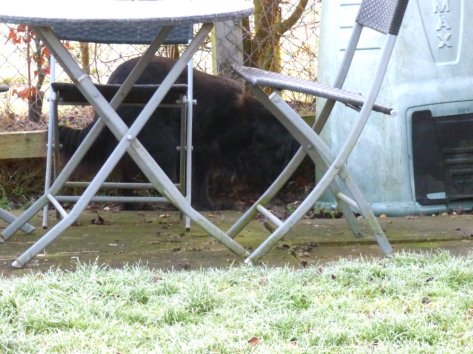 ‘Course, she has to notice me digging in the flower bed, doesn’t she? Starts squeaking about her nice clean floor…well, me and the mud are outside, so what has that got to do with anything? She got a bit distracted when the wren came in for breakfast though, so I could just get on with the job. 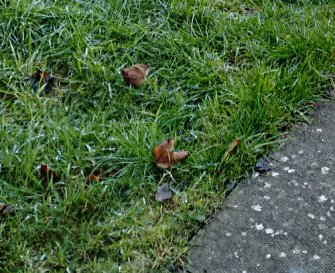 I didn’t even notice it at first… thought it was just another leaf, ’cause it is so small… but it kept her occupied while I dug up a bone. And I have to state my objections right now, just for the record; I am not a ‘vile beast’ or a ‘disreputable animal’, I personally like the smell of rotting bones… and if she doesn’t want them on her sofa with me, she shouldn’t complain about muddy floors… I was only trying to help. 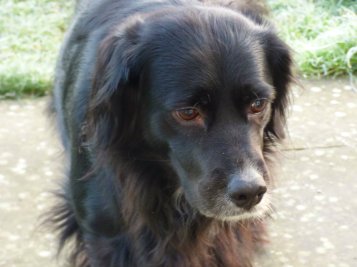 She seems to have a probem with muddy noses too. Noses sort of gave the game away, I think. Hers and mine.

So my bone is in the compost bin… though she did swap it for a chicken treat, so it wasn’t a complete loss.

Anyway, it has been a busy morning and I should probably keep an eye on the crows…

Sue Vincent is a Yorkshire-born writer and one of the Directors of The Silent Eye, a modern Mystery School. She writes alone and with Stuart France, exploring ancient myths, the mysterious landscape of Albion and the inner journey of the soul. Find out more at France and Vincent. She is owned by a small dog who also blogs. Follow her at scvincent.com and on Twitter @SCVincent. Find her books on Goodreads and follow her on Amazon worldwide to find out about new releases and offers. Email: findme@scvincent.com.
View all posts by Sue Vincent →
This entry was posted in Birds, Dogs, Humour, Photography and tagged dawn, dog behaviour, fair play, Garden. Bookmark the permalink.

96 Responses to Notes from a small dog – Finders Keepers