This is the part where it gets awkward. Tell the facts straight, or tell how it felt? Either way, our conclusions will take some time to process. Some of the ideas sound so odd even to us that sharing them might need a new approach…though stranger things are published every day. Yet once again, on the surface, nothing happened.

Camera enthusiasts could doubtless explain the light and colour; I’m not sure that it matters whether there is a perfectly logical explanation or not. What we experienced opened up a new line of thought…new ideas… a better understanding, perhaps. As far as I am concerned, this was one of those times where logical reality takes second place to the magic of the moment.

We were in the inner chamber, looking out through the window that was never a window, having been beneath the earth of the original mound, at the carved stone that had also been buried and beyond it to the stone in the next field. I haven’t been able to find any measured information on that, but I would guess, from what we saw on site and from aerial photographs, that the two stones align with the passageway… and thus with the rising of the midsummer sun.

We experimented with sound once again, as we had at Presaddfed. Unlike our experience with the chanteater, though, here the chamber seemed to amplify and echo the sound, feeding it back as more a physical reverberation than a sound. They had buried a single, human earbone beneath the stone in the centre of the circle when it stood. Were they working with sound? As the ninth chant slowly faded, we stood in silence, hand in hand. To complete the circuit, I felt, I too had to speak, voicing a renewal of a long-ago dedication. And then it was done.

We stood a while, looking at the offerings. Almost at a loose end; the simple rite had changed the mood. I tried to take another picture through the ‘window’, but all I got was orbs…dust motes, perhaps, stirred up by the sound. It was while I standing in the light… while I was talking to them (“You can’t tell them that…””Why not? I talk to everything else…”) that my companion disappeared down the corridor behind me.

Shot after shot, just the dancing motes of light, changing colour from white to gold. “You have to see this…” He is standing with the camera, just outside the mound. His face is white, eyes wide, as he clicks the shutter. “The floor went red… and now look…” 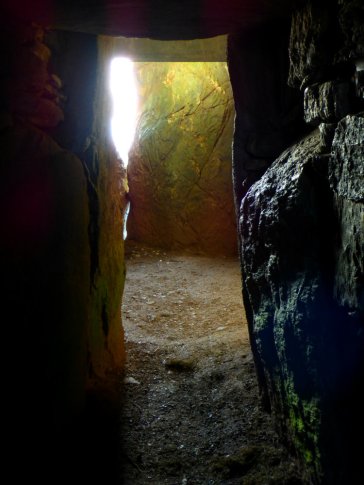 I looked. The chamber is flooded with bright, golden light. As it streams out of the chamber, it meets the blue, casting shadows that bring the stones of the passageway to life. They look like statues, guardians… stone ghosts of the ancestors. High on the back wall of the chamber, there seems to be a boar painted, where there is no painting.

It was the strangest feeling, as if we were looking through a time tunnel or a rift in reality, seeing something that patently wasn’t there…or not any more… or not in this world. Yet we both saw and captured the same things.  It wasn’t the sun… that was peeking over the top of the mound and not in  line with the ‘window’. “Whatever it was came straight down the passage then, when it reached the entrance, it was just…gone.” Whatever it was, we were going back in…

Sue Vincent is a Yorkshire-born writer and one of the Directors of The Silent Eye, a modern Mystery School. She writes alone and with Stuart France, exploring ancient myths, the mysterious landscape of Albion and the inner journey of the soul. Find out more at France and Vincent. She is owned by a small dog who also blogs. Follow her at scvincent.com and on Twitter @SCVincent. Find her books on Goodreads and follow her on Amazon worldwide to find out about new releases and offers. Email: findme@scvincent.com.
View all posts by Sue Vincent →
This entry was posted in adventure, albion and tagged Anglesey, Bryn Celli Ddu, Don and Wen, history, Photography, sacred sites, spirituality, Stuart France and Sue Vincent, symbolism, The Silent Eye, Wales. Bookmark the permalink.