View from a car park…

The camera was out almost before I’d parked the car. We had decided to stop in Castleton for refreshments before the final part of the drive. and the car park of the Bull’s Head is the kind of place where you need a camera. In one direction, the narrow Wynatts Pass winds through he spectacular limestone of the area. The Great Ridge closes the horizon, with Mam Tor, the ‘Shivering Mountain’, dominating the skyline.

It’s name means the ‘mother hill’ and is said to be so-called because the shale that makes it so unstable and gave it its nickname has created many smaller hills around it. It could have an older meaning though… the body of the goddess was once seen in the cures of the landscape. Over three thousand years ago, a hillfort was built on the summit, almost seventeen thousand feet above sea level. There are burial mounds there too, and evidence of over a hundred hut placements, cut into the hillside.

Ivy-leaved toadflax grows wild in the old stone walls. Lambs play or bask in the sun in the little strip of land beside the pub where traces of the old town ditch can still be seen. Visible history is everywhere here. The Celts began the town, the Romans opened up the mines in the caverns. The Danes and Saxons continued to seek the wealth of minerals beneath the hills, mining lead and the beautiful picture jasper known as Blue John.

Perhaps the most obvious piece of history is Peveril Castle, a Norman stronghold perched high above the town. Constructed in wood in 1080 for William Peverel, alleged to be the illegitimate son of William the Conqueror, it was designed to oversee the Royal hunting grounds in the forests of the Peak.

Peveril Castle over the town of Castleton. Image by Steven Newton CC BY 2.0

In 1175, the castle was rebuilt in stone, and played a central role in the area’s history throughout the Middle Ages. Even from a distance you can see how the facing stone has been stripped or has fallen away over the years since it was first built. Much of the stone was robbed for other buildings after the castle finally fell into disuse.

Castleton is, without the tourists, a sturdy, quiet town, typical of the area. With the tourists it becomes a busy, bustling place throughout the summer. At the end of May each year, many gather there to celebrate Oak Apple day, where the Garland King, wearing a huge bell-shaped garland of flowers, leads the procession through the town, accompanied by his Lady. The ‘Queen’ here is a posy of flowers that crowns the Garland.. which leads me to agree with the folklorists who give the custom a more ancient origin than the more commonly accepted celebration of the restoration of the crown of Charles II. 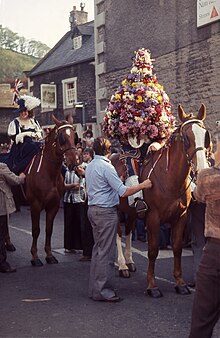 For us, though, the most familiar sight in Castleton is avian… there are always jackdaws, clamouring for attention, raiding the pub tables in the little courtyard and waiting for the camera to be pointed their way, wondering whose turn it will be to feature on a new book cover…

Sue Vincent is a Yorkshire-born writer and one of the Directors of The Silent Eye, a modern Mystery School. She writes alone and with Stuart France, exploring ancient myths, the mysterious landscape of Albion and the inner journey of the soul. Find out more at France and Vincent. She is owned by a small dog who also blogs. Follow her at scvincent.com and on Twitter @SCVincent. Find her books on Goodreads and follow her on Amazon worldwide to find out about new releases and offers. Email: findme@scvincent.com.
View all posts by Sue Vincent →
This entry was posted in History, Photography, Stuart France and Sue Vincent, travel, wildlife and tagged Catleton, Dark sage, Derbyshire, jackdaw, Norman castle, Peak didtsrict, Peveril castle. Bookmark the permalink.

19 Responses to View from a car park…