Where were we? Sheep in the churchyard… 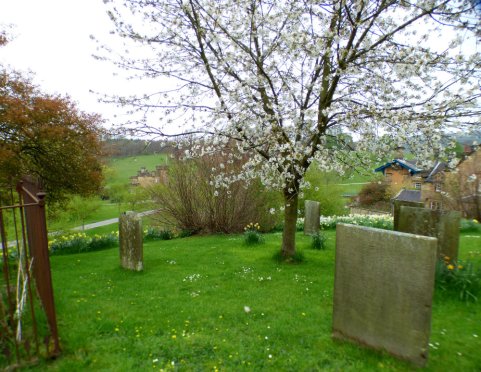 Both my friends departed the day after the Hellfire Caves… one back to his home in the north, the other to wander the south for a while before meeting up with her companions. It was a farewell, not a goodbye… and not for long. A few days later, I was heading north again… the Foxes were dancing at Holmfirth and we wanted to be there. 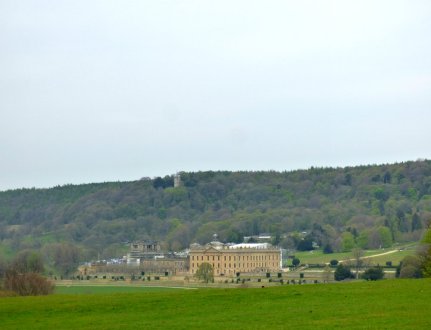 I made good time on the way north and arriving close to my destination early, decided to see if the church at Edensor on the Chatsworth Estate might be open. We had tried to visit the place before but had arrived in time for a Christening… 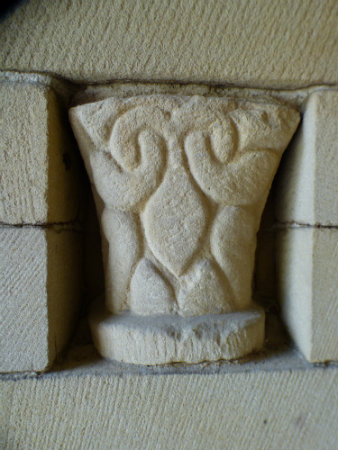 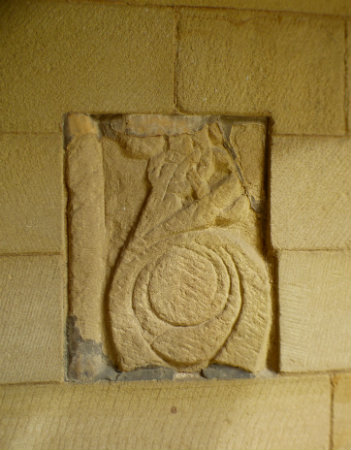 We had only managed a glimpse through the door and a look at the carvings in the porch… fragments of the ancient church that once stood here. It was rebuilt in the mid 19thC and I wrote about that a little while ago. 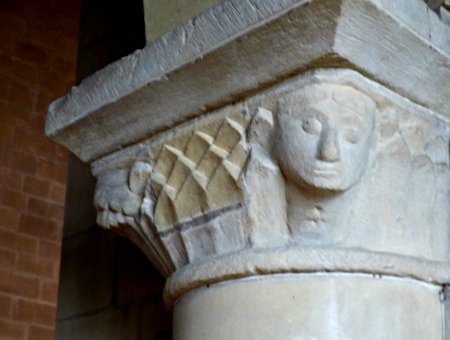 Knowing it to be a modern church, I had principally come to see if any details of the original 12thC church remained… and see a vast marble memorial. I found some fragments of old carving on the capital of a pillar, tucked away behind a screen. 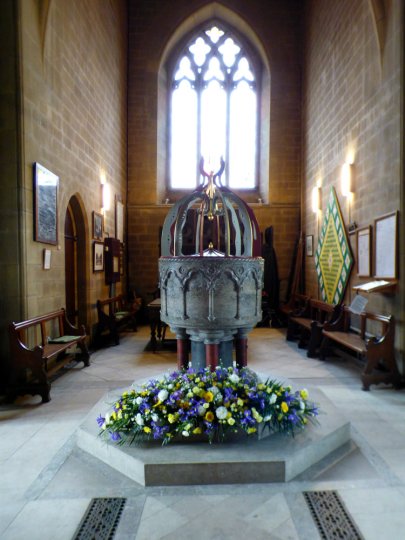 There were two fonts, a rather upmarket version and a simpler, older one, which looks a little forlorn its its corner, balanced precariously on a pedestal that doesn’t seem to fit. 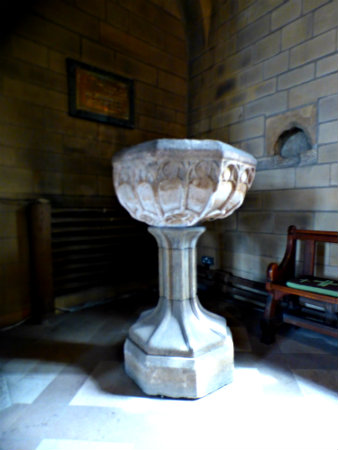 The stained glass was beautiful though, particularly the window in the west with its circular design. 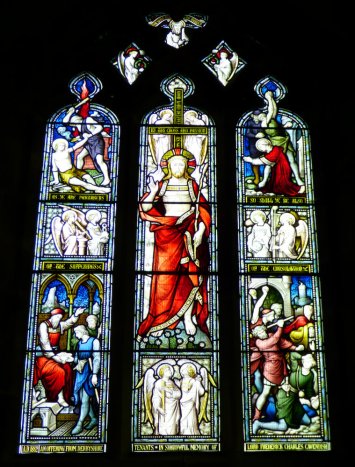 The windows hold a multitude of stories. Not just those depicted by the artist, but the tales of those to whome they are dedicated. 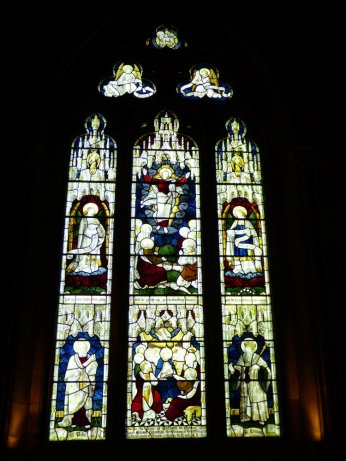 And then there are the stories within stories that we may never know. Who were the models? Did the artist use imagination or real people? How many hidden stories can one window hold? 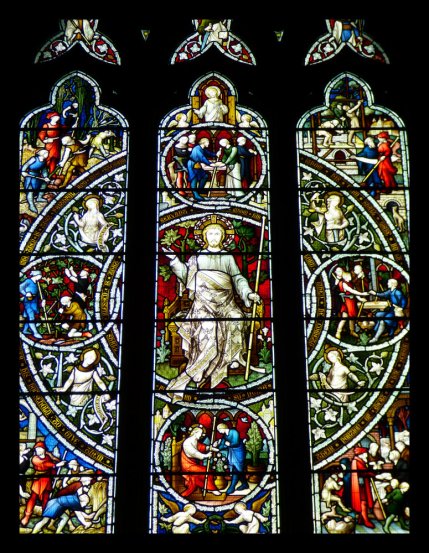 The Cavendish Memorial is dedicated to Henry (died 1616) and William (died 1625), the sons of Sir William Cavendish and Bess of Hardwick. William was the 1st Earl of Devonshire. It stands in a side chapel and completely dominates the space. 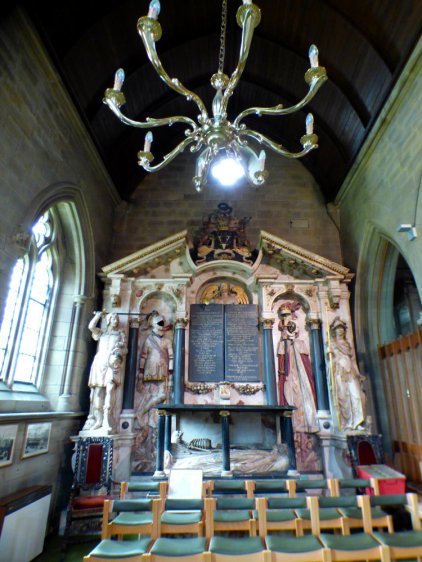 Bess herself was a formidable woman with a hard head for business. She made a series of socially upward marriages, eventually becoming Countess of Shrewsbury. In 1553 she began building Chatsworth House, considered by many to be the finest of the Great Houses. Mary, Queen of Scots,  spent part of her imprisonment at Chatworth in Bess’s care. 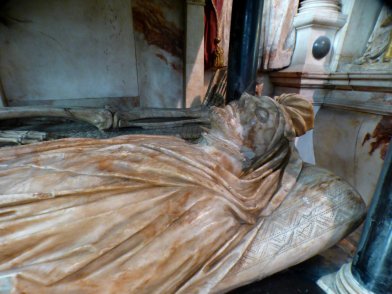 The monument to her sons is as formidable and overpowering as the woman herself, though Bess preceded them to the grave, aged 81, and is interred in what is now Derby Cathedral. 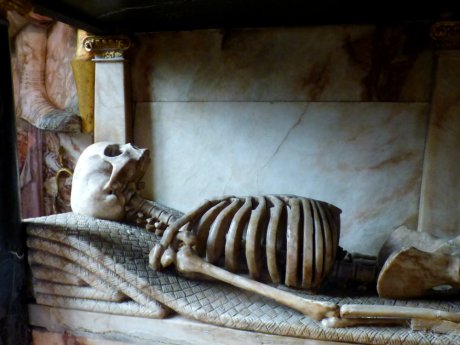 The central sculpture shows a cadaver wrapped in a shroud and a finely carved skeleton. To eiher side are a knight and his lady, both sylised warrior figures, with their accoutrements, carved in great detail right down to the spurs. 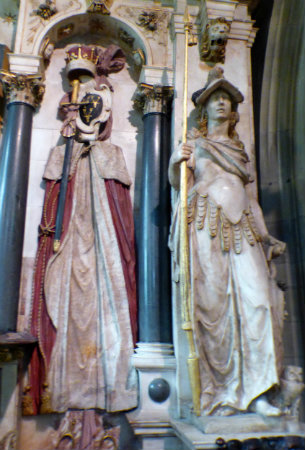 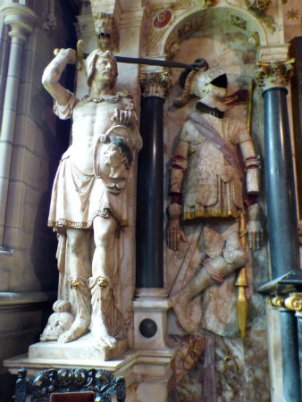 I was glad to have seen it. Just as a work of art it is magnificent… yet the most touching thing in the little chapel, for me, was a wreath of everlasting flowers, sent by Her Majesty Queen Victoria in 1852 in memory of Lord Frederick Cavendish. 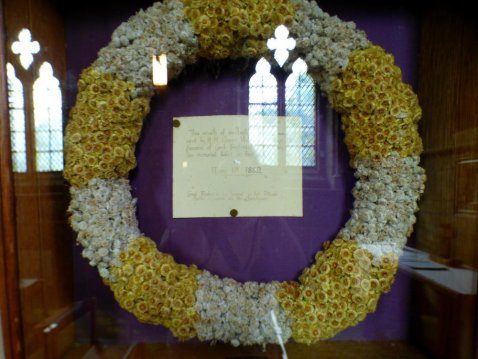 As tombs go, though, I prefer them simpler, fascinating as the great tombs are. They do give a detailed glimpse into a time long past… but they are always for show and one wonders how real the sentiments they express may be. 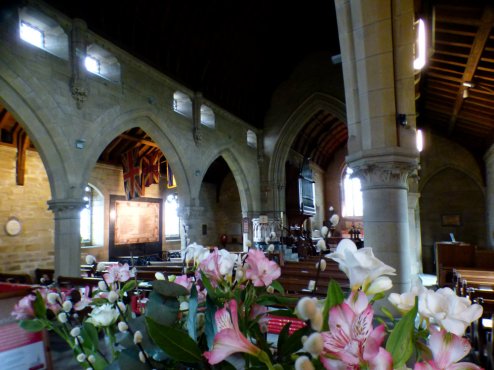 The tombs of lesser folk seem to be more human and tell a truer, if less detailed tale. Walking through the churchyard, whose grass is still kept short by sheep, I found a link to a human story close to home as I spotted the surname of a friend who lives in the village. 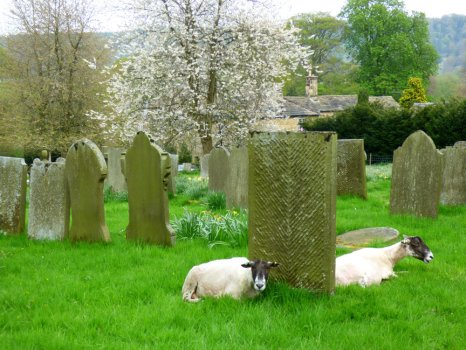 Although I had the churchyard to myself, I was far from alone, between the sheep and the pheasants wandering between the graves. 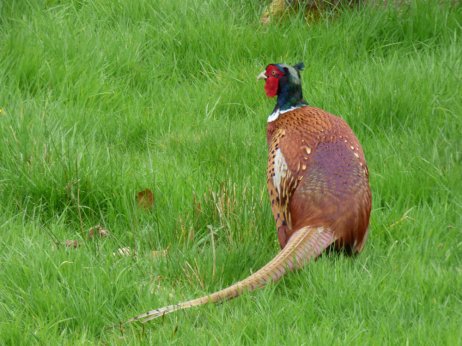 A short walk to the top of the mound took me to the more recent memorials to the Cavendish family… far simpler than their forebears and less ornate than you might imagine. 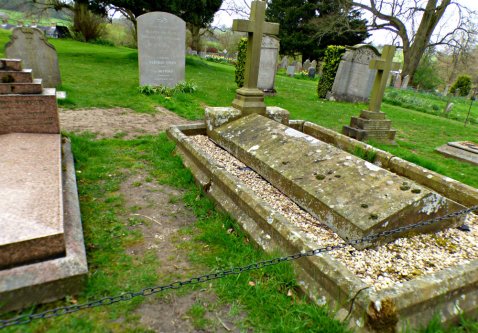 The Dukes and their families lie quietly in the green of a Derbyshire spring. In the top left of the picture is the grave of Kathleen Cavendish, Marchioness of Hartington, née Kennedy She was the sister of John F. Kennedy, and died tragically in a plane crash aged only 28. Her husband had been killed on active service in WWII. The young couple had spent only five weeks together as man and wife. Her husband was buried in Belgium, close to where he fell. She sleeps alone amid the primroses. A very human story. 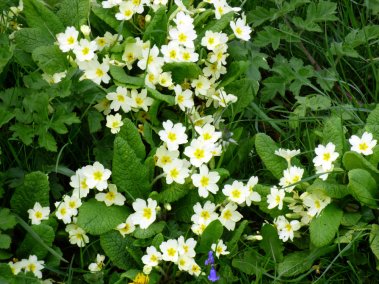 Sue Vincent is a Yorkshire-born writer and one of the Directors of The Silent Eye, a modern Mystery School. She writes alone and with Stuart France, exploring ancient myths, the mysterious landscape of Albion and the inner journey of the soul. Find out more at France and Vincent. She is owned by a small dog who also blogs. Follow her at scvincent.com and on Twitter @SCVincent. Find her books on Goodreads and follow her on Amazon worldwide to find out about new releases and offers. Email: findme@scvincent.com.
View all posts by Sue Vincent →
This entry was posted in Churches, History and tagged Bes of Hardwick, Derbyshire, Duke of Devonshire, Edensor, JFK, Kathleen Kennedy. Bookmark the permalink.

18 Responses to Where were we? Sheep in the churchyard…