Where were we? The human face of history…

Without the telegraph wires, you wouldn’t know when you were…

The Domesday Book, completed by order of William the Conqueror in 1086, is a manuscript record of the landholdings of much of England and parts of Wales. It is to this document that we owe so much, preserving a detailed inventory of the political and ecomonical landscape of the 11thC.

The village sits high above the Vale

It was a time when many or the manorial lands had changed hands, being gifted to the Norman supporters of the invading forces under Duke William, who had beaten King Harold at the Battle of Hastings in 1066. There are some places that have an air of having changed little in the intervening centuries. 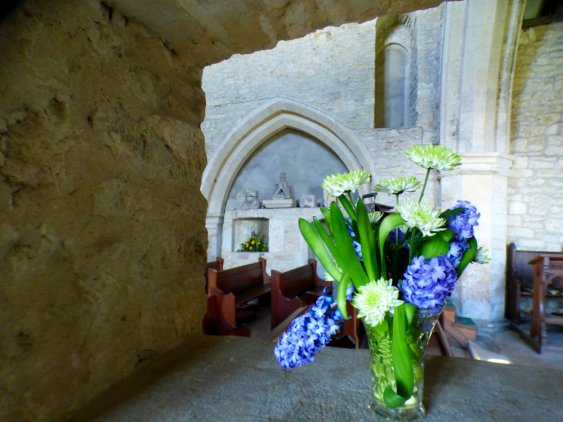 Through the ‘squint’ to the Falconers chapel, with the sealed door to the rood loft.

The little village of Ashendon is one of them. Prior to the Conquest, Ashendon was held by three brothers, but by 1086, it was held by Walter Giffard, son of one of the knights and Lord of Longueville who had accompanied William at Hastings and who was created 1st Earl of Buckingham.

The village, in spite of its air of antiquity, has changed much since those times. Although remains dating back to Anglo-Saxon times have been found, even the church is ‘new’, and was built around 1120, with additions and restorations through the ensuing centuries.

…his legs are crossed, indicating that he was a Crusader…or a Templar

St Mary’s has seen many changes, from plague to Civil War, yet it retains a simple serenity that seems to transcend the temporal troubles of this world and look beyond them to the next.

From nave to chancel through the 13thC arch

It is an unusual church that seems never to have covered the stone at its heart with plaster and paint. It is built of limestone rubble with patches of herringbone masonry in the north wall and very little ornamentation.

It once had stained glass, but now the light streams in through unpainted windows. Only a fragment remains of its former glories, high in the tracery of one of the clerestory windows, a single small pane of 15thC glass remains. I have been unable to find out why, but the probability is that it was lost during the Reformation when so much of the Church’s iconography was obliterated.

The Falconers Chapel has gone too. Once a memorial chapel, now only intriguing fragments remain and a door to a beyond that no longer exists, lost like the Rood Loft that once dominated the nave and helf the Cross.

Although much has been lost here to time and politics, much still remains. It is, as it has always been, at the heart of its village. The fragrance of lilies and hyacinths filled the little church instead of incense…the only time flowers do not decorate the church is during Lent and the obvious love and care of those who worship here is palpable. 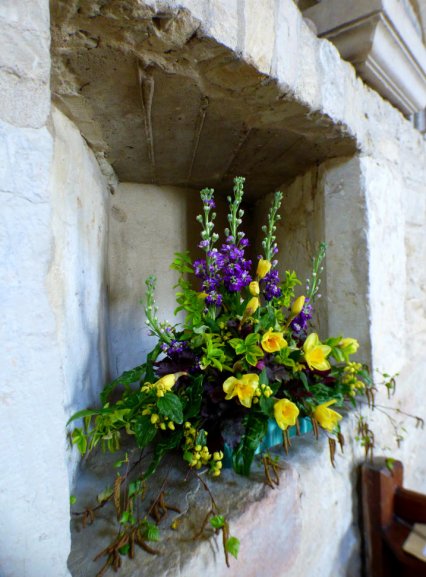 From the sealed window of the Falconer’s Chapel to the altar, there are floral arrangements everywhere and, through their colour and the care with which they are made, the little church is decked in beauty.

Look beyond the flowers, though, and the details start to emerge. Carved heads decorate the aisle, a processional cross rests in a corner and the ancient piscina waits for holy water to be returned to earth through the fabric of the church. 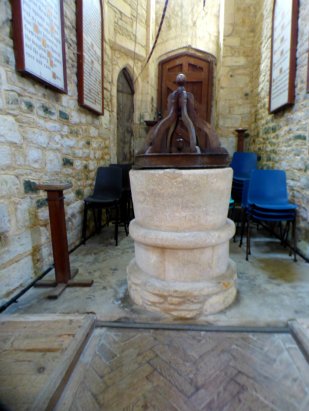 The font stands at the west end of the nave and has been the village baptisms for over 800 years. It is a strange feeling to think of the Norman baptisms that would have taken place here..and yet know that children are still baptised here today. The continuity of life in the village is nowhere more evident, even though the names and faces are all but gone.

Not all of them, though have fallen into obscurity. Some are remembered. Even in this tiny hamlet of less than a hundred households, two names are recorded on the war memorial as fallen in the Great War. One of them was George Lay, the other was Walter Ewers whose family have lived in the village since the 1700s. Walter, a farm labourer, joined up in 1915 aged just 19. His brother Edwin also enlisted and was later wounded in action. Walter was eventually posted to the Machine Gun Corps in France, known as the Suicide Corps due to their appallingly high mortality rate. He was wounded by shrapel three times, twice to the knee and finally to the back. He served in France and Flanders and died of his wounds in 1918. In a corner of the church, he is remembered. His all-too-young face still gazes back from the faded photograph beside his medals and the letter from King George. As always, it is the human story that puts the heart into the carved wood and hewn stone.

Sue Vincent is a Yorkshire-born writer and one of the Directors of The Silent Eye, a modern Mystery School. She writes alone and with Stuart France, exploring ancient myths, the mysterious landscape of Albion and the inner journey of the soul. Find out more at France and Vincent. She is owned by a small dog who also blogs. Follow her at scvincent.com and on Twitter @SCVincent. Find her books on Goodreads and follow her on Amazon worldwide to find out about new releases and offers. Email: findme@scvincent.com.
View all posts by Sue Vincent →
This entry was posted in Churches, History, Photography and tagged Ashendon, buckinghamshire, Norman architecture, st mary, village church. Bookmark the permalink.

29 Responses to Where were we? The human face of history…