We tried to get an early night on Beltane Eve… but it didn’t really happen, so when the alarm sounded at 3.30 next morning, we should have been reluctant to move… yet my guests and I were all soon up, dressed and piling into the car for the drive to Oxford and the May Day celebrations.

It was still dark when we arrived. The streets were busy for a pre-dawn Sunday, with leftover revellers from the Saturday night city mingling with newly awakened families. A pair of mallard ducks were posing as pigeons, helping to clear the fallen fast-food from the streets as thousands of people headed for Magdalen College.

For five hundred years the Hymnus Eucharisticus has been sung at 6am by the Magdalen College Choir from the top of the Great Tower, to greet the first morning of May with sacred song. A short blessing is followed by traditional songs from the choir… then the party begins. 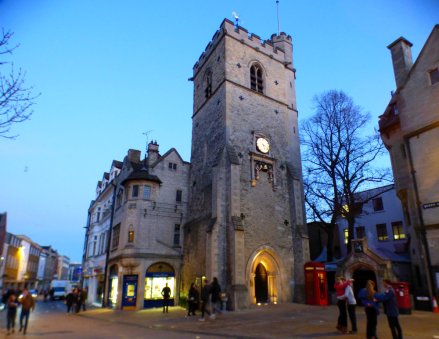 It is quite surreal walking through a Saturday night on the town that has not yet finished for many  with grandparents and babies up early to greet the dawn. Side streets are silent, architecture is clear of the throng of tourists and stands stark against the glowing sky… yet the modern centre of town is littered with the detritus of a drunken evening.

We were in place by half past five… any later and the crowd, some 25,000 strong, would have prevented us getting any kind of view at all of the Tower. So we stood and people-watched for a while, taking in the carvings, gargoyles and grotesques that adorn the buildings both new and old. 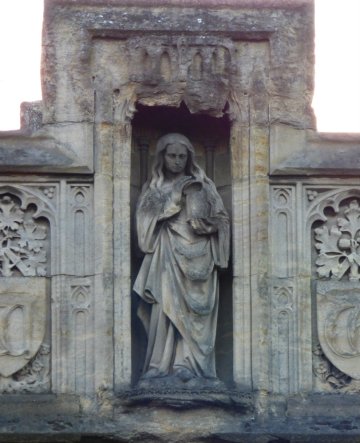 Portraits and caricatures sit side by side with ancient symbols and characters from story and legend. It would be interesting to know the stories behind some of the carvings, whilst others are known and easily identified…and yet others are pure whimsy on the part of the sculptor. 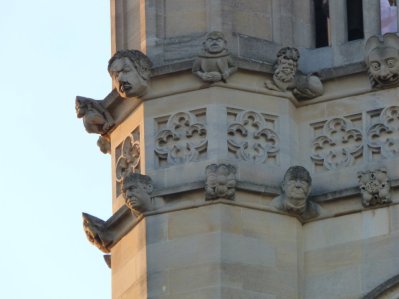 The White Hart seemed rather appropriate though after the workshop weekend… 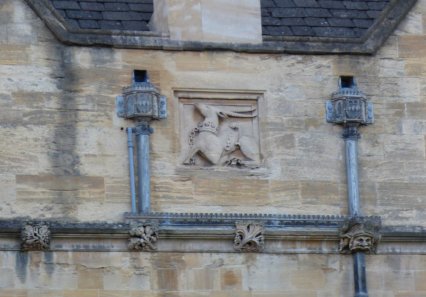 All around was noise, laughter and languages from across the world. Sharp-edged young women swore as they shared stories of their boyfriends… tipsy gentlemen shared tales of their own…. yet as the sun gilded the edge of the Great Tower and the bell tolled six… the crowd was hushed.

To stand in a throng so large, so densely packed into the narrow funnel of the street… and be able to share a smile with those around you as the only sound to be heard is a blackbird’s song breaking the silence is a magical thing. The first strains of the Hymn  written in the 17th C by a fellow of the college, rose in praise… and for a few moments, there were no barriers of language, race, creed or culture, gender or age… the sea of faces turned towards the Great Tower and shared a dawn in beauty and peace.

Sue Vincent is a Yorkshire-born writer and one of the Directors of The Silent Eye, a modern Mystery School. She writes alone and with Stuart France, exploring ancient myths, the mysterious landscape of Albion and the inner journey of the soul. Find out more at France and Vincent. She is owned by a small dog who also blogs. Follow her at scvincent.com and on Twitter @SCVincent. Find her books on Goodreads and follow her on Amazon worldwide to find out about new releases and offers. Email: findme@scvincent.com.
View all posts by Sue Vincent →
This entry was posted in Music, Photography, travel and tagged Hymnus Eucharisticus, Magdalen Tower, May Day, Oxford. Bookmark the permalink.

41 Responses to May Day morning