We were coming to the latter end of our January ‘holiday’. Most of the week had been spent working on scripts and props for the workshop. In the morning, Stuart would polish the scripts while I went to work and at lunchtime we repaired to a village pub somewhere to have a read through, drawing strange glances from anyone close enough to overhear. By Friday, we were ready for a day off… and we had arranged to meet a friend in the south. 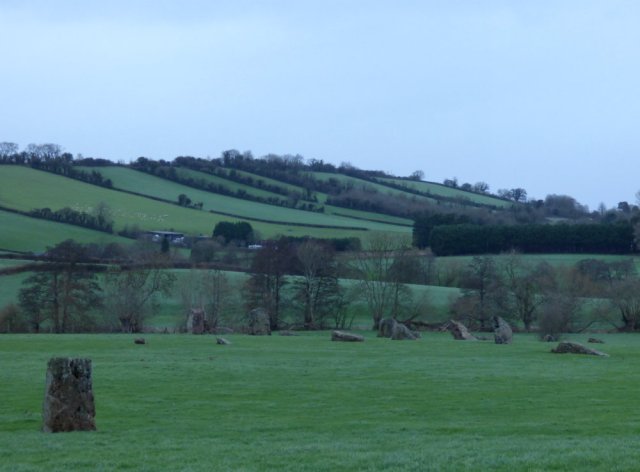 We had arranged to meet at 10.40 and, on the roads we would take, it wasn’t that long a drive. In fact, if we set off early enough, we could do the slightest of detours and pay a flying visit to Stanton Drew. My companion had never been there…I’d been twice before but had barely scratched the surface of the site. It had to be done.

We passed the White Horse at Uffington around dawn. A slight hiccough in Google’s directions cost us a little time, but we eventually arrived and I remembered the way to the tiny parking spot that leads to the Great Circle. We booted up… the ground is sodden and  cows frequent those fields. I would find the walking boots little protection when the mud came up over the ankles at the cattle gate…

The village of Stanton Drew is tiny, nestling in the Somerset hills. The circle, on the other hand, is huge, second only in size to the great circle of Avebury and one of the largest Neolithic complexes we know. The stones themselves have a character all their own, showing forms and faces in every surface. 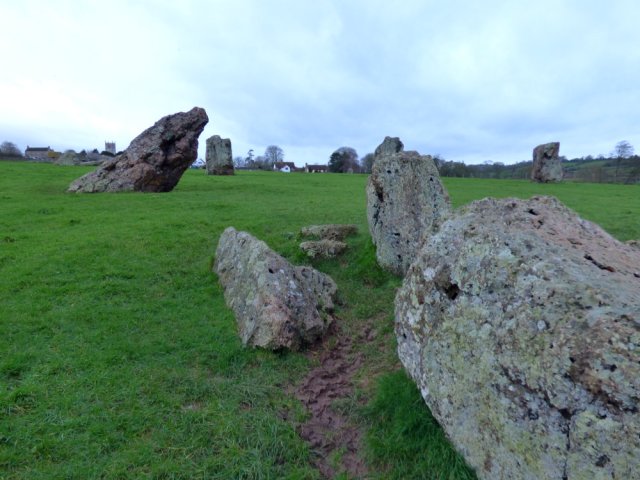 Were they always there? Was this why these stones were chosen? Were the faces encouraged into their expressive presence…or is it just weathering and the propensity of the human eye to find faces; a trait we must undoubtedly share with our ancestors. Smaller than the great stones of Avebury, they are still enormous in size, but it is their presence that strikes you above all else. 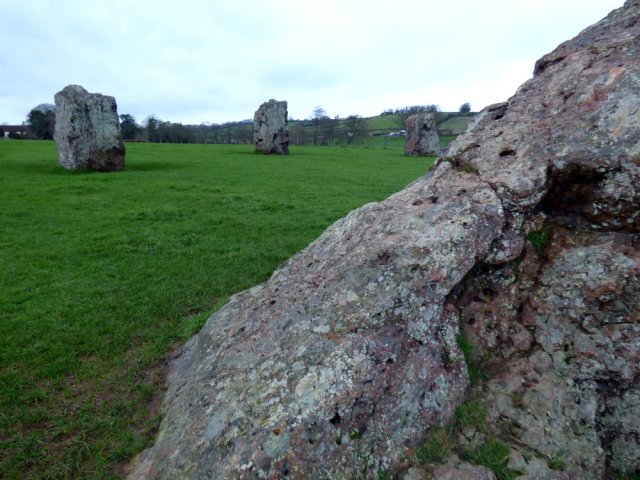 The circle is almost always empty. There are no tourist facilities, no gift shops or tea rooms, and the  site is not as easy to decipher as a Stonehenge or an Avebury… yet is is one of the most magical and fascinating places I know. The birds seem to think so too and we were welcomed with wings.. and later the hawks sailed silently above.

The horizon showed intriguing features that would have to wait. Perhaps it was the damp, or the winter light and iron-grey sky, but the stones seemed to belong to a different reality than the rolling green of English fields. Somehow they seemed to stand out against their background as if possessing a further dimension to their reality that barely intruded itself upon  ours. They seemed both alive and more real than the landscape around them. 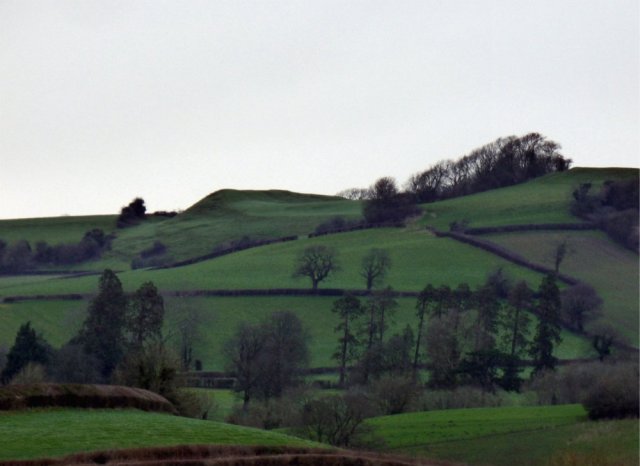 There are the inevitable legends attached to the site…like the drunken Sunday bridal party turned to stone, waiting for the devil to come and play for them… but the truth of what our ancestors saw in the stones is lost to both legend and history. All we can do is try and see the world through their eyes and feel it in our bones as we walk beneath the hooded stones…and sometimes, you feel you almost understand. 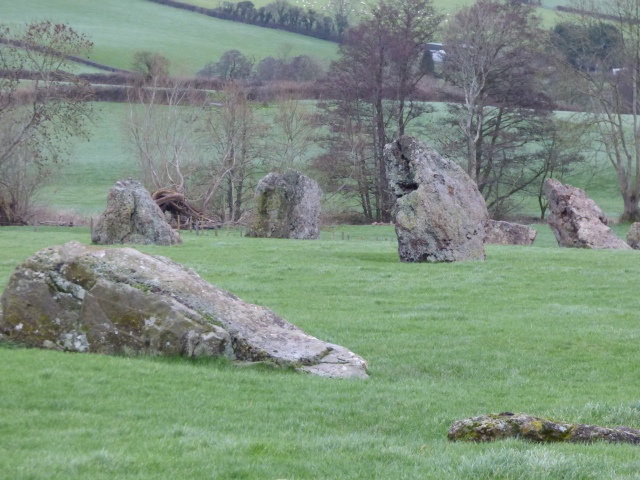 The site itself is huge, and the landscape around the circle itself still holds its secrets. As this was a flying visit, we barely had time to drink in what we could see. We didn’t even make it to the Cove, the three great stones in the garden of the Druids Arms… so Hauteville’s Quoit, the beautiful old church and the surrounding hills will have to wait till we have a day there. 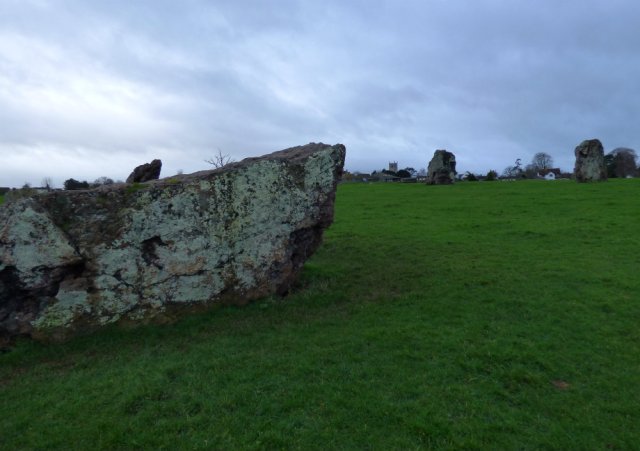 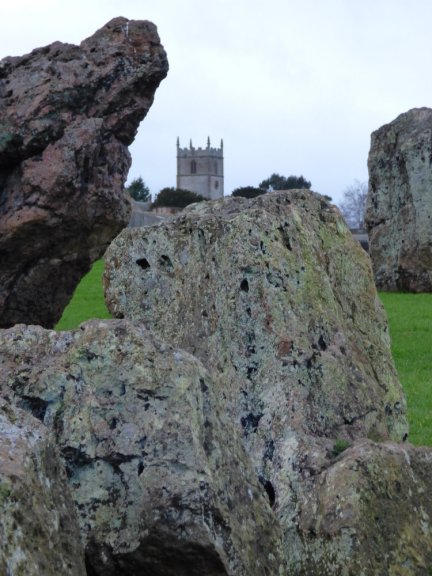 Geophysical surveys of the Great Circle have revealed 400 pits, designed to hold posts of three feet wide, arranged in nine concentric circles. Various theories have  been put forward about their purpose and a little while later I was struck forcibly with one of my own… but that still needs thinking through. Other pits were found in the other circles, and the Cove dated to a thousand years earlier than the rest of the site. It may once have been the portal to a burial cairn not unlike Waylands Smithy. 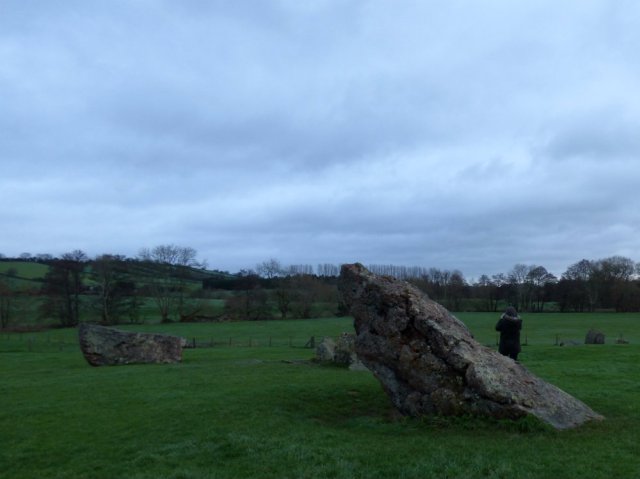 But it is not the facts and figures you think about when you walk such an ancient landscape. You look on with wonder, asking how…but mainly why… and try to feel your way into the landscape and look through older eyes. I have lain in the centre of that circle through a midsummer noon when the bees buzzed and the flowers grew. Then it was quiet and benign. Winter’s silence suits it better… for me the place whirled… making me want to spin with it in a dance as old as time. In such a place you know that the dance has never ceased… it is only that we have forgotten the steps. In a place like this, you begin to remember… 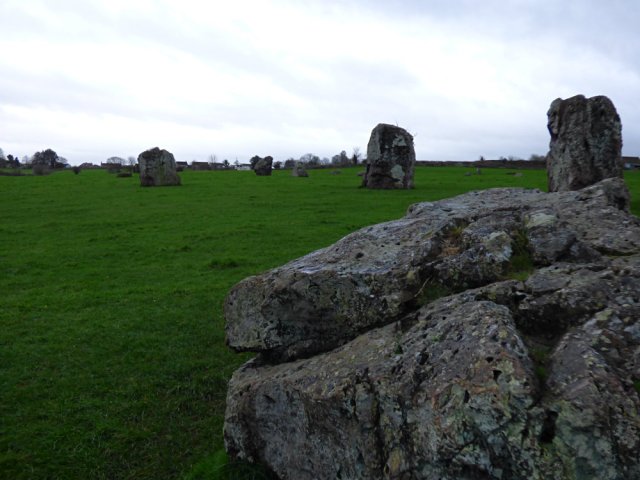 Sue Vincent is a Yorkshire-born writer and one of the Directors of The Silent Eye, a modern Mystery School. She writes alone and with Stuart France, exploring ancient myths, the mysterious landscape of Albion and the inner journey of the soul. Find out more at France and Vincent. She is owned by a small dog who also blogs. Follow her at scvincent.com and on Twitter @SCVincent. Find her books on Goodreads and follow her on Amazon worldwide to find out about new releases and offers. Email: findme@scvincent.com.
View all posts by Sue Vincent →
This entry was posted in Ancient sites, earth, England, History, Landscape, Photography, Sacred sites, Spirituality, travel and tagged megaliths, somerset, standing stone, stanton drew, stone circle. Bookmark the permalink.