Notes from a small dog – close encounters of the furred kind 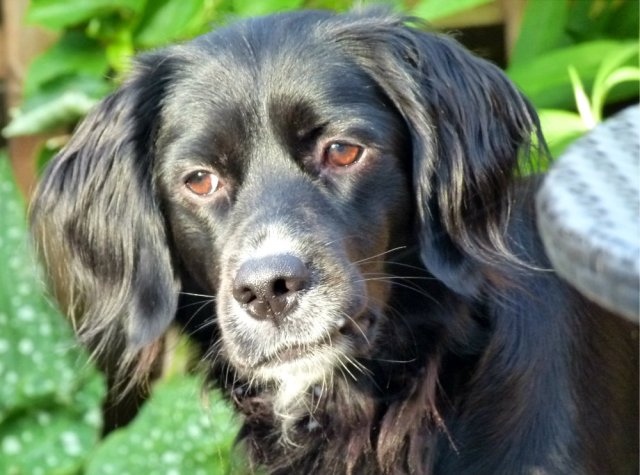 Well, all she’s done all week is sleep. Every time I turn round to fetch her a tennis ball, that’s it… she’s gone. I don’t remember her hibernating before, but she seems to be getting the hang of it all of a sudden. It’s either that or she’s got some kind of sleepy sickness… I’ve never seen her on the sofa as much!

Now don’t get me wrong, I’m all for cuddles on sofas.There’s not enough of it about in my opinion and I’ll take any she’s offering, but it’s not the same if she’s snoring… 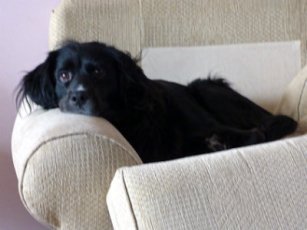 Normally she’s tapping away on the ‘puter all day. This week she might as well have stayed in bed for all the work she’s managed to do. I mean, I can understand her sleeping through her mealtimes, but she’s even slept through mine! I’ve had to wake her up and remind her a couple of times. It’s not on, you know.

Dereliction of duty and all that.

So, I’ve sort of had to amuse myself a bit, ‘cause when she eventually wakes up, she’s goes all jittery and taps away at double speed… muttering about trying to catch up.

Anyway, she leaves the door open for me most of the time, so I can amuse myself. Personally, I don’t see why I couldn’t play with the snail thingy… I could throw it really well and it rolled a bit… but she made a sort of ‘arrghhh’ noise and confiscated it.

So I wandered back outside as you do, and smelled something odd in the garden. I’d sniffed it before, but I just couldn’t place it, so I had a good look round in the dark. Then I saw it heading for the bushes. 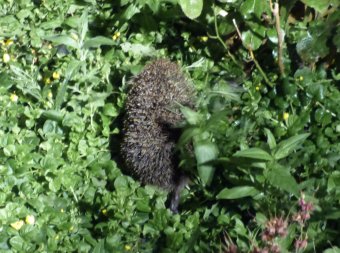 Well, sleepy or not, she would have to come out and deal with it. We can’t have intruders in the garden! So I growled a bit, just to get her attention, but she didn’t come. I thought I’d better try and deal with it myself then, but the thing was just curled up in a ball and I couldn’t talk to it. I did try…

So I thought, if it looks like a ball, maybe it rolls? So I gave it a bit of a push and it sort of did… then its legs came out and, well, I may have yelped. Just surprised, you understand. A reflex… Well, I wasn’t having that! I tried to roll it again and have another sniff… She came out then.

‘Pparently, it isn’t a good idea to roll hedgehogs with your nose.

And, in case anyone’s interested (mentioning no names…) it isn’t nice to laugh at people with spines in their noses.

If you ask me, it shouldn’t be allowed for prickly things to look like balls either. Traumatised, I was.

If that wasn’t bad enough, then the weather went wild, with too much rain and wind for her to want to go for long walks. So I was really ready to go out when she got up in the dark this morning and opened the door. 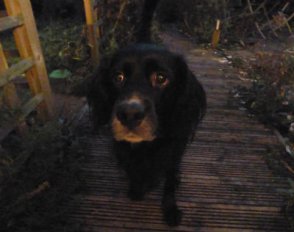 The wind was still howling. And stuff was squeaking in my garden. Well, after the hedgehog I wasn’t taking chances, so I made her come out and watch while I investigated. Then the fence jumped on  me… I shot out of the way, just in case… and her… well, she just collapsed in a little heap giggling.

No use at all.

You just can’t get the calibre of two-legses these days, you know.

I may hibernate too.

Sue Vincent is a Yorkshire-born writer and one of the Directors of The Silent Eye, a modern Mystery School. She writes alone and with Stuart France, exploring ancient myths, the mysterious landscape of Albion and the inner journey of the soul. Find out more at France and Vincent. She is owned by a small dog who also blogs. Follow her at scvincent.com and on Twitter @SCVincent. Find her books on Goodreads and follow her on Amazon worldwide to find out about new releases and offers. Email: findme@scvincent.com.
View all posts by Sue Vincent →
This entry was posted in Dogs, Humour, Life and tagged cuddles, hedgehogs, hibernation, wind. Bookmark the permalink.