Rooted in the Land – Ancient marks

While there has long been an interest in the lives of our ancestors, until relatively recently that interest was largely limited to a small group of passionate antiquarians. Modern archaeological methods may be stringent in their cataloguing and recording, the work painstakingly slow, but all that was still to come and many sites were, with the best of motives and care, still almost destroyed. 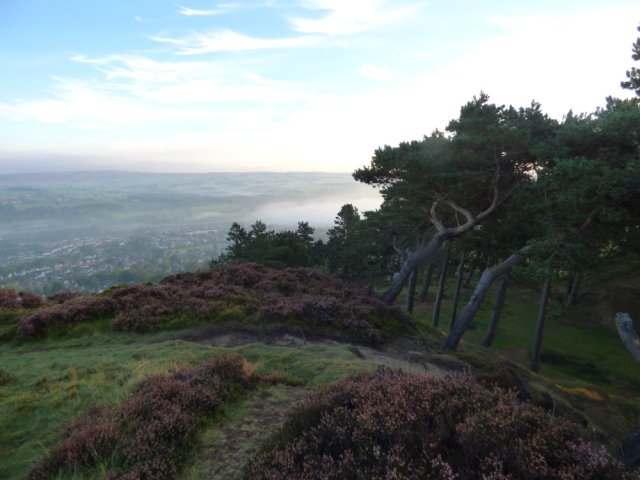 So it is not surprising that in the mid-1800s, when stone was required for building the fashionable spa town of Ilkley, depredations were made on the moors that may have eradicated unrecognised treasures. There are reports that the famous Cow and Calf rocks were once accompanied by a Bull that fell victim to the rising popularity of the town. The stone from the Bull may even have been used to build the Crescent Hotel. If true, I am inclined to be of the Northern Antiquarian’s opinion and hope the place is haunted… or at the very least, that the perpetrators failed to sleep easy.

What is certain is that stone was taken from Hangingstone Quarry and in the process we cannot know what unrecorded traces of our forebears may have been lost. After we had watched the dawn on Sunday morning we wandered over towards the quarry with our companions to revisit the petroglyphs carved on the flat stone that looks out over the valley. Even to the untrained eye it is evident that the carvings have weathered here for centuries at least… and that same untrained eye can see where line and curve lie broken, where rocks have fallen or been removed. 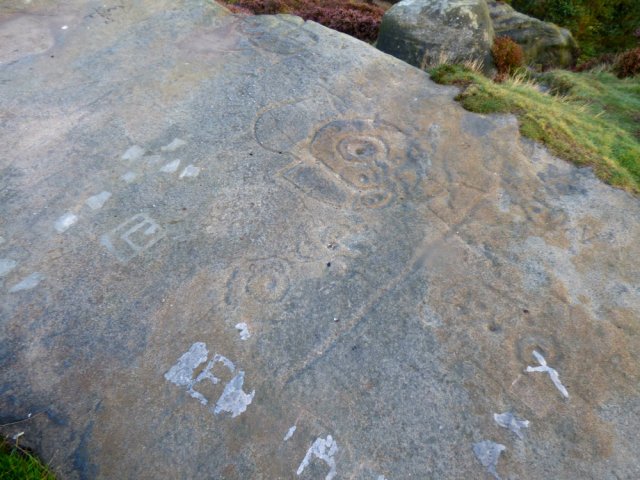 The scope of design on this one rock is huge and looks like an aerial plan… though of what, no-one knows for sure. Every conceivable theory has been advanced over the years, from the interesting to the ludicrous, as to what they may depict. Star charts, lunar calendars, the placement of springs, settlements and sacred sites… even UFO landing sites… Personally, I’m inclined to go with the Nature-based options; the spirit of the place is evident even today….how much more so would it have been in the distant past when Man lived in symbiosis with the land and sky, themselves seen as alive and aware? 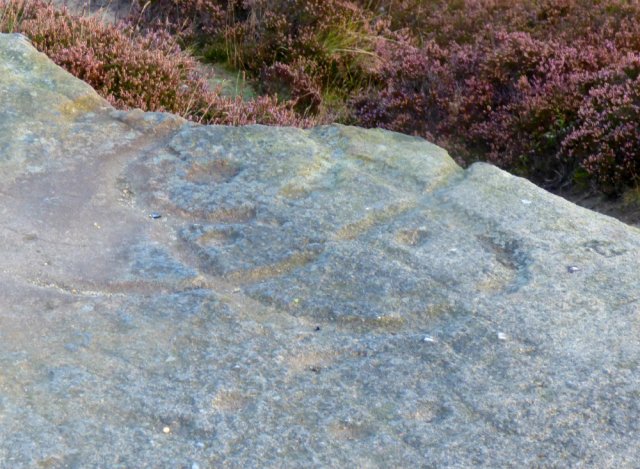 I’m not even certain that all the carvings on this one stretch of moor… and there are over four hundred of them officially recognised… are necessarily referring to the same concepts. One thing is certain, we will never know for sure… these are the only written records we have, so unless we come across a Rosetta Stone that works for petroglyphs, we can only ponder and wonder and seek our own answers.

To stand upon this rock and look out over the dale, knowing that here, four thousand years ago, a carver of stone looked up at these same hills is a strange feeling. Especially as the morning mists swirl around and below, obliterating the town from view for an instant and taking the landscape outside of time. 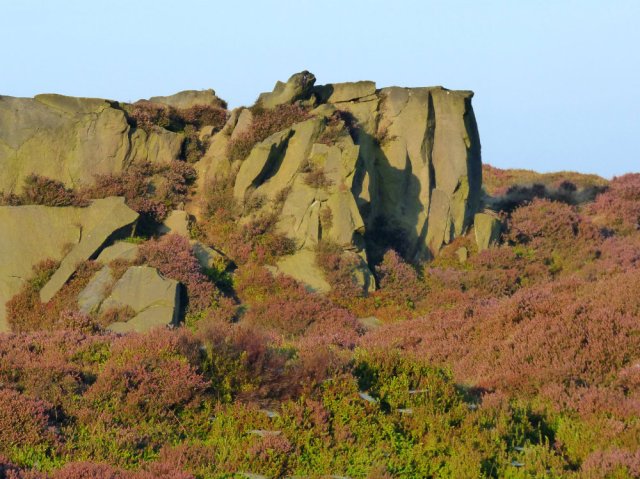 Little now is left of the surface rocks of what was once a plateau. How much was lost when it was quarried for the town is unknown. That this place would have held meaning for the Old Ones is clear, with the enclosure and bulk of the Cow so close and so many other carved rocks within a short distance.

Sadly, erosion takes its daily toll and little by little the carvings fade, overlaid by more modern, less meaningful graffiti cut into the rock with the vanity of man choosing to lay claim to a momentary glory, admiring his own name marring the irreplaceable.

You have to wonder what the fairies make of this behaviour. The Hangingstone is known to be a haunt of theirs and has been known as the Fairie Kirk. There are legends about the hollowed ‘cave’ beneath the overhang of the rocks, a place where I have sheltered from storms more than once, wishing the rock at my back would open and lead me into mystery. But the only evidence of the small folk that Sunday morning were their nets hung out to catch the dew in the heather.

Sue Vincent is a Yorkshire-born writer and one of the Directors of The Silent Eye, a modern Mystery School. She writes alone and with Stuart France, exploring ancient myths, the mysterious landscape of Albion and the inner journey of the soul. Find out more at France and Vincent. She is owned by a small dog who also blogs. Follow her at scvincent.com and on Twitter @SCVincent. Find her books on Goodreads and follow her on Amazon worldwide to find out about new releases and offers. Email: findme@scvincent.com.
View all posts by Sue Vincent →
This entry was posted in Ancient sites, Art, England, History, Landscape, Photography, Responsibility, Rooted in the Land, travel and tagged Ilkley, petroglyphs, rock art, wildlife. Bookmark the permalink.

37 Responses to Rooted in the Land – Ancient marks