Rooted in the Land – Cast iron and pasties 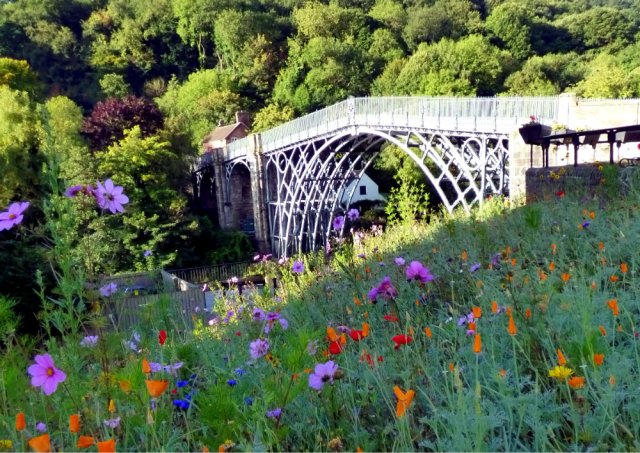 The sign for Ironbridge had confirmed it… I was right to make the engineering connection with Telford after all. Even though I had been half convinced I was confusing it with Thomas Telford, the civil engineer and architect. As we were, by this time, about ready for breakfast… having been on the road long enough to call it lunch… and as we didn’t fancy Telford in the rush hour, we decided to make a quick detour and see if we could catch a glimpse of the bridge that had given the town its name. 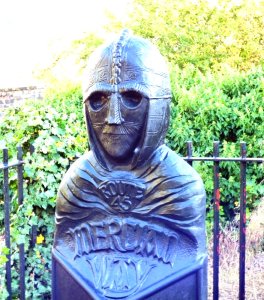 We didn’t get lost… we just ran out of signposts and took a ridiculously long detour. The sign had pointed one way… the bridge was, it turned out, just a few yards in the other direction. Still, it was a nice drive and we would definitely have missed the morning traffic that had been crawling towards Telford while we drove through leafy tunnels, finally finding the car park at a little before nine. The first thing to greet us was a Saxon warrior sporting the famous helmet of Sutton Hoo, which, in turn, reminded me of the Staffordshire Hoard… that haul of treasure found near Lichfield in 2009 by a metal detectorist that is an incredibly beautiful glimpse of the goldsmith’s art. It seemed fitting that the way should be guarded by a Mercian warrior after our adventures with our Doomsday books. 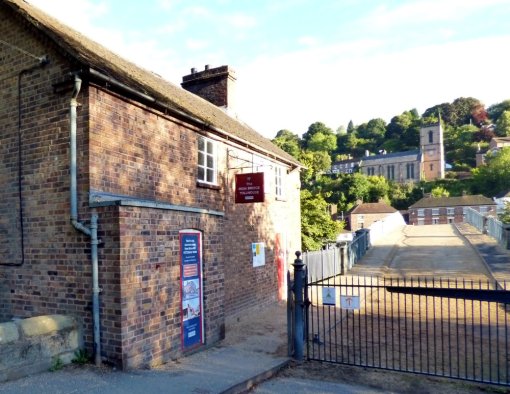 We passed the Toll House and wandered into the sunlight on the famous bridge, now part of the World Heritage Site of Ironbridge Gorge. The Toll House was where the price of passage was collected for those wishing to cross the bridge or use the local roads. High under the eaves a sign still displays the tariffs in ‘old money’… the pounds, shillings and pence of my youth. Decimal currency may have brought us into line with most of the rest of the world, but it lacks the charm of the ‘thrupenny bit’, the sixpence and the half-crown that was the best coin a child could find slipped in their pocket by a fond grandparent. Full crowns were reserved for specially minted celebration pieces. 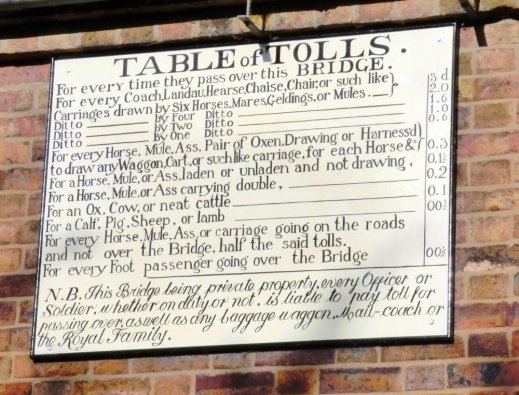 I can still remember learning the complicated mathematics for adding up costs when there were 12 pennies to the shilling, 20 shillings to the pound … or 21 to the guinea. Ha’pennies were still around then, and though the farthing with its wren design, worth a quarter of a penny, still turned up it had ceased to be legal tender in 1960. The farthing too was Saxon in origin, coming from a feorthing, a fourth part. We were, unbelievably, taught all that at infants school alongside standard decimal maths and I remember quite clearly Miss Howe, the headmistress (who had a passion for painted pottery vases) explaining that the pound, shillings and pennies were written £. s. d… with the ‘d’ standing for denarii, from the Roman coinage upon which the system of 240 pennies to the pound was based… I must have been all of seven at the time. 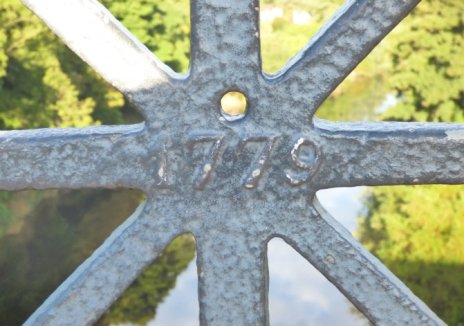 Beneath us the river Severn flowed calm in the morning sun. The centre of the bridge records the date of its construction 1779, just three years after the American Declaration on Independence and ten years before the start of the French Revolution, when Marie Antoinette was just 24 years old and five years a queen. I don’t know why that particular point of reference came to me… perhaps it was something in the quality of the morning light that reminded me of France. 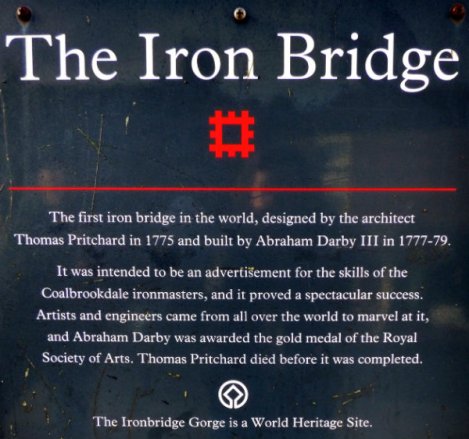 The bridge is made of cast iron and spans the river still with grace. It was the first arch bridge in the world to be made of what was then a new material and drew attention worldwide, the innovative structure gaining much praise. The span of the bridge is made from five ribs, each 100ft long. Nearly 1700 components were cast individually to fit with each other rather than as standardised pieces, allowing for some quite considerable discrepancies between seemingly identical pieces. From above the arch reflects into the water as a perfect circle. The Gorge is prone to landslides, however and early in its history this problem had to be addressed when cracks began to appear as the sliding earth pushed the bridge bases closer together. 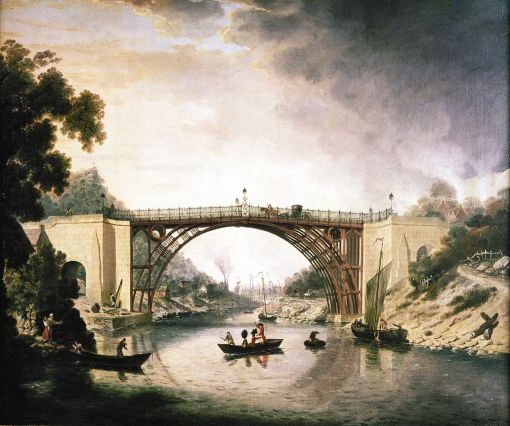 The construction drew many artists to the site. One of the first paint the bridge was William Williams who, in 1780, was commissioned to make an image of the bridge for the princely sum of ten guineas. Looking at his painting and its style perhaps best puts into context the time of the construction… a time that would see the full impact of the Industrial Revolution that is commemorated in the museums of the area. 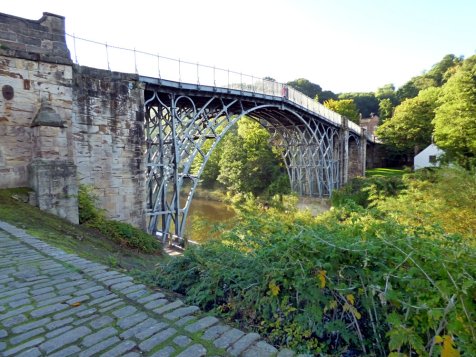 We, however, had no time to explore further with a long journey ahead. We did need breakfast though, and found it at the far end of the bridge in Eley’s World famous Pork Pie Shop… though we didn’t go for the pork pies, opting instead for a proper Cornish pasty apiece to eat on the hoof. We couldn’t really linger any more… we needed to get a little closer to our destination, still about a hundred and fifty miles away. That wouldn’t take long on fast roads and motorways, of course, but we weren’t planning on taking them… you miss too much. Who knew what else we would find…? 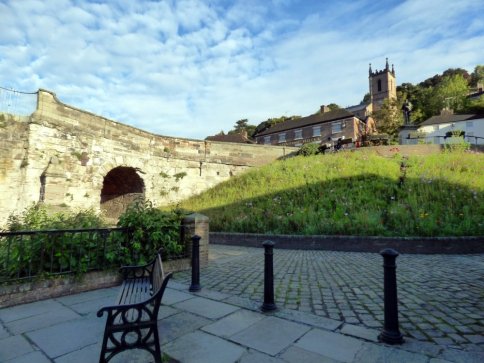 Sue Vincent is a Yorkshire-born writer and one of the Directors of The Silent Eye, a modern Mystery School. She writes alone and with Stuart France, exploring ancient myths, the mysterious landscape of Albion and the inner journey of the soul. Find out more at France and Vincent. She is owned by a small dog who also blogs. Follow her at scvincent.com and on Twitter @SCVincent. Find her books on Goodreads and follow her on Amazon worldwide to find out about new releases and offers. Email: findme@scvincent.com.
View all posts by Sue Vincent →
This entry was posted in adventure, Don and Wen, Doomsday: The Ætheling Thing, England, History, Memories, Photography, Rooted in the Land, Stuart France and Sue Vincent, travel and tagged cast iron, coinage, engineering, Ironbridge, Telford. Bookmark the permalink.

46 Responses to Rooted in the Land – Cast iron and pasties