We were hardly going to sit in a churchyard without trying the door… especially when it sits under its original Norman arch dating back to the middle of the 12th century. We had been here before, but for once, I could not for the life of me remember what the interior held… only a vague impression of quiet simplicity. Thinking back, it had been ‘weird weekend’ and almost a year ago… and the events of that weekend had been enough to erase a simple church from memory. That was when the Black Shade had first put in an appearance too…

The archway is original, with its weathered head above the more modern keystone, but the marble pillars and guardian demons are Victorian… even though the demaons themelves are quite spectacular. When you look closely, they appear to be almost owl-like, but also echo the foliage of the Green Man… and appear to have their foreheads and nose carved in the shape of the Dove. The Victorians may have done a fair bit of ‘damage’  to historic churches with their restorations, but they also seem to have had a superb handle on symbolism.

Most of the church is of that era, on the surface at least, having, like so many others, been heavily restored at that time. Above a window on the south side of the Chancel, however, are three 12thC carved heads, which are thought to mark the position of the earlier window. Compared to their Victorian counterparts they look crude and basic at first glance, yet there is a power of expression in them that the more refined carvings seem to lack… and a certain humour too. More basic, perhaps, more visceral, but expressing somehow a greater depth of humanity in their eroded lines that the regal heads beneath them. Even if one of them does appear to be a horse.

Once through the doors I remember the interior… all too clean and sharp. Completely Victorian… except in the details. The font, modern-looking as it is on its crisp plinth, is actually thought to be Norman too, though much remodelled. It had been found in the churchyard collecting rainwater. You would never know its history to look at it… 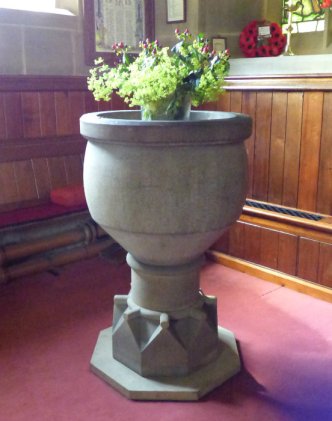 There are other details… a faded head in a corner, one of those which would have supported the original roof; the priests’ door and the base of the tower; a shield above the pulpit.. all hark back to the earlier church. The glass, however, is ‘modern’, dating since the time of the restoration work. There are, of course, the monuments too. One tells how there was only one communal coffin in the village, used for transporting the dead to the church where they were then removed and laid in earth. 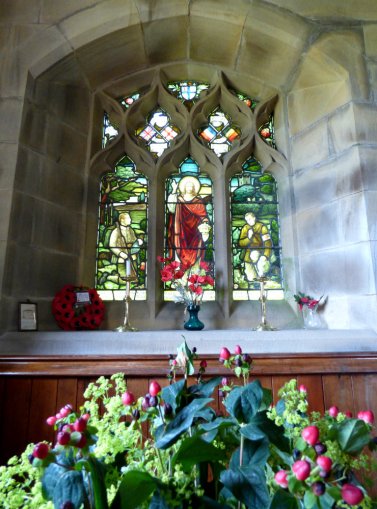 There are also some carved stone plaques that seem to have been tacked on rather as an afterthought. They depict biblical scenes and symbols… the Last Supper, the harp of David, the Pelican symbolising the ultimte sacrifice of self, feeding her young by piercing her own breast. It is a curious symbol, but a common one, often used to depict both the Crucifixion and Eucharist. The original legend, however, was not so straightforward. The Pelican-in-her-Piety, as the symbol is known, was already part of the Christian tradition in the 2nd C, when it was mentioned in an early text, the  Physiologus, Christianising legends already old. It recounts how the baby birds strike out at their parents and the parent birds  strike back, kill their offspring, but on the third day the mother pelican strikes her own breast, pouring her blood over her babies and bringing them back to life. 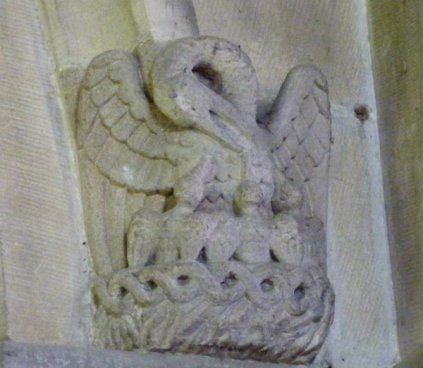 That was all we had time for. There was still work to be done back at base… still salmon and wine too… so we headed back to Sheffield. Of course, it was a hot day… and we were in Beeley… Ice-cream would be a nice touch. We turned the car up the long, narrow lane and the hill we had walked on weird weekend, wondering if our fairy-woman and her ancient ice-cream van would be there on a summer Sunday afternoon. If she really existed at all. We had to find out after all… 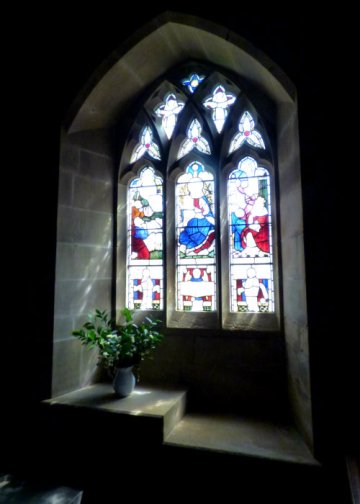 Sue Vincent is a Yorkshire-born writer and one of the Directors of The Silent Eye, a modern Mystery School. She writes alone and with Stuart France, exploring ancient myths, the mysterious landscape of Albion and the inner journey of the soul. Find out more at France and Vincent. She is owned by a small dog who also blogs. Follow her at scvincent.com and on Twitter @SCVincent. Find her books on Goodreads and follow her on Amazon worldwide to find out about new releases and offers. Email: findme@scvincent.com.
View all posts by Sue Vincent →
This entry was posted in Churches, England, History, Photography and tagged Beeley, Chatsworth, Derbyshire, Norman architecture. Bookmark the permalink.