How to make a living as a writer

It wasn’t her real name, of course, but close enough. An author’s nom de plume. Still, seeing it at the end of the printed article gave her a thrill. Every time. I felt the same way when that first magazine dropped through the letterbox with my name at the end of the article. Like mother, like daughter. There was a pride in that, hard to put into words.

It was, for both of us, so many years apart, a small thing… but to a writer it means the world.

I am not a million-dollar author with a major publishing house, I am not even a respectably sized fish in that particular pond. But I am a writer.

It took me a long time to call myself that, to ‘own’ it, as a friend said the other day. My Mum was a writer…she had things printed all over the place. I just wrote things. Even when ‘The Mystical Hexagram’, written with Gary Vasey came out, published by a publisher, I still didn’t feel right about calling myself an author.

You see, I grew up in a house with an Author… one who actually attained the Holy Grail… she made a living from her work. I knew the system. Long hours hunched over the ancient Imperial typewriter, later succeeded by a more portable affair. Always coffee, occasionally turning the typewriter upside down to shake out the fallen cigarette ash and biscuit crumbs. Pages thrust at me to read… red pen…retype. Long, involved discussions… we’d call it brainstorming today… about how the plot should unfold. My mother, you see, is a storyteller.

She had always written. Starting with poetry, she had penned her first novel when I was very young, largely because the title came to her and she had to write the book. Two other novels followed. Stories I adored as I grew old enough to appreciate them. Later there were children’s tales. Each manuscript when finished would be placed in a big manila envelope, signed across all the seals and posted back to our home to get the postmarked date… the only way to protect copyright back then. Every so often, when she could afford the postage, she would duly type a letter to a publisher, package up a copy of the MS and post it off in hope with a stamped return envelope. And every time the book came back with a rejection letter.

Meanwhile Mum was writing articles and short stories, trawling through the Writers and Artists Year Book that was renewed every year and sending them off. Sometimes there would be a whoop of excitement as she opened the envelope that held a cheque. Most times she packaged the story back up for its next tentative voyage.

This went on for years… most of my childhood in fact. Over those years Mum wrote several stories in Yorkshire dialect; amusing pieces showing the archetypal character of our home county, entitled ‘Dahn at t’ Pig and Whistle’. One of these pieces landed on a desk and there was a letter… an invitation to write and record a Radio series for the BBC. Those were exciting times for my mother and we all gathered round the radio for each broadcast in shades of an older time.

But of course, the series ended all too soon and she was back to the typewriter once more. More articles were sent out, tons more rejection slips were received. Still her novels had not been published and gradually they were sent out less and less often. She had tried for ten years with no success. But she didn’t give up.

One day, she had a letter. One of her stories, sent to a women’s publication, had ended up, quite by accident, on the wrong desk. The letter was from the occupant of that desk, Ian Forbes. The content of my mother’s article was totally unsuitable for the publications he managed… but he had read it anyway and liked her style. Would she like to try something a bit different?

Mr Forbes… or Uncle Ian as he became affectionately known…ran publications many of my generation may remember. He had sent samples scripts of what he would need. My mother sat down to study them. She didn’t write romance… it wasn’t her thing, but, she decided, she’d give it a go. The fee was too good to refuse.

For the next few years, until I left England for France, we would sit every month batting ideas around like tennis balls, backwards and forwards. Every month a cheque and a copy of the latest Love Story in pictures would be delivered. The author’s names did not appear on these little magazines. I only have one copy now, stored amid the family papers… a supernatural tale set in Egypt which we had written together.

I learned a lot about the writer’s craft back then, some of the stories she wrote were even my idea initially and my first bit of design was featured in one tale called, I believe, Lucky Blue Dress. I learned how to collaborate back then too, I suppose, as well as how to tell a complex story in few words and images… which has served us well lately with the publication of the new graphic novel, Mister Fox.

I learned other things too.

My mother had spent a lifetime following her dream and when it finally arrived, bringing that monthly cheque equivalent to a woman’s wage back then, it did not resemble the dream she thought she had. I learned how little it actually matters whether or not you get public recognition…like your name on the cover… as long as you have put your heart and soul into what you do, because you love what you do. I learned that you could take an unpromising vehicle… for so my mother saw love stories… and incorporate something meaningful; her stories always had a moral and the type of motherly teaching that young people need woven into them. Even a lightweight love story could have depth.

I saw that it wasn’t enough to have talent, nor a gift for the use of words. Nor was it enough to be patient or to be doggedly pursuing something for a decade with single minded dedication. You could do everything right and still not succeed. You also need that single stroke of luck… and the persistence and faith to keep on keeping on so that if it arrives, you are ready to seize the opportunity. Because one thing is certain… had my mother stopped writing the opportunity would never have arisen.

My mother’s novels have not yet been published. But they will be. I’ll do it myself. One of her children’s stories, Monster Magic, is now in print and the phone call I had when she received the first copies in the post was as full of excitement as I can ever remember. It was the very first ‘proper book’ she had held in her hands with her name on the cover. And when I told her she had to send one to the British Library…! She has waited all my life and most of hers for that. 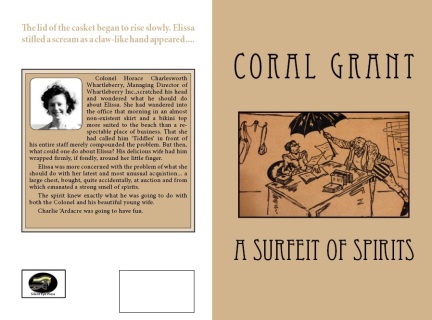 All ready for the edited manuscript

My mother stopped writing many years ago. It doesn’t erase a single word of what she has written. Her stories may be from an older, gentler time. They may never sell a copy except to the family. But that really doesn’t matter. She wrote because she loved what she did. She wrote because the words inside her needed to find the page. She wrote from the hidden heart of her even when the vehicle wasn’t what she would have chosen. She made it hers. For some years my mother made a living as a writer. But more importantly perhaps, for a lifetime her writing has made her live.

You see, my mother is a writer. And so am I.

Sue Vincent is a Yorkshire-born writer and one of the Directors of The Silent Eye, a modern Mystery School. She writes alone and with Stuart France, exploring ancient myths, the mysterious landscape of Albion and the inner journey of the soul. Find out more at France and Vincent. She is owned by a small dog who also blogs. Follow her at scvincent.com and on Twitter @SCVincent. Find her books on Goodreads and follow her on Amazon worldwide to find out about new releases and offers. Email: findme@scvincent.com.
View all posts by Sue Vincent →
This entry was posted in Books, writing and tagged being a writer, follow a dream, publishing process, rejection slips. Bookmark the permalink.

151 Responses to How to make a living as a writer