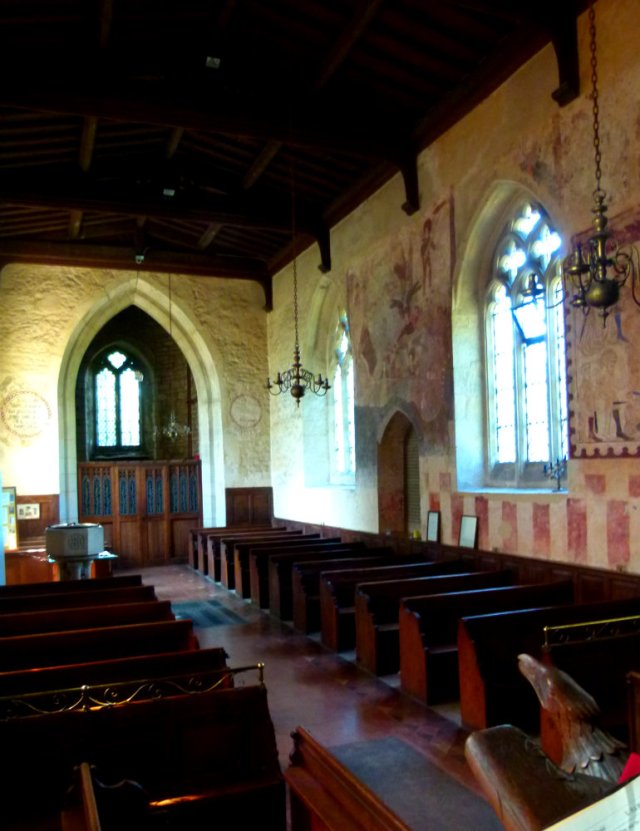 I’m heading north this morning for the monthly meeting of the Silent Eye as we gear up towards the annual April Workshop in Derbyshire. There are one or two things we have in mind to see while I’m up there… and who knows where we might end up. You don’t actually have to go far to find little gems of places to visit. So, while I’m away I thought I could share a few places that we found pretty much on the doorstep. 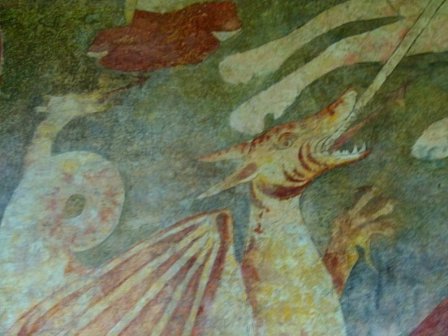 Note the dragon has a head on its tail too.

The church of St Lawrence poked its tower tantalisingly above the square, modern rooftops of Milton Keynes, looking very much out of place and rather forlorn. We had been on the way to the coach station but had time to spare and decided to investigate. That was the first time. It was obvious when we opened the door that we would have to come back… the walls were amazing.

The painting to the left of the window shows blasphemers dismembering Christ… a very Osirian painting.

The church is now redundant and cared for by the Churches Conservation Trust which looks after some of the historic and beautiful places that are no longer in service. St Lawrence’s was first built in the 14th century and, as with many of the old places, restored in the 19th century. The chancel was completely rebuilt in 1849, but the rest of the church was the surprise. 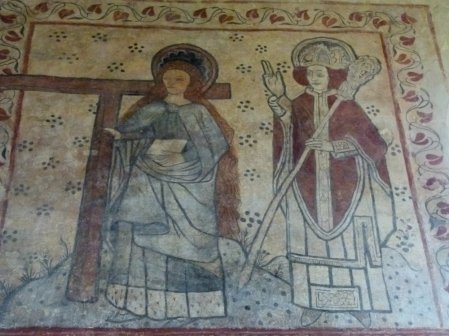 There are windows by Kempe and Gibbs. Bells from the 15th century… but it was the walls that had us standing open mouthed in the doorway. The walls are covered with paintings dating back to 1400AD. They were covered in plaster for about 300 years after the Reformation, when such idolatrous iconography was hidden behind whitewashed walls bearing no more than scrolls of text from the Bible. We have to wonder how many other old churches bear similar treasures beneath the flaking distemper. It is surprising how many paintings are still being uncovered and waiting for conservation to make them safe for future generations to see. 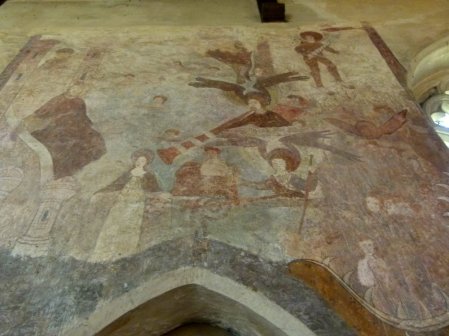 This is living history… You can see the costumes of the times on the figures. The hierarchy of the Biblical scenes mirrors that of the unlettered peasant who would recognise the social status of Lord or Lady by their clothing, and these scenes were designed to convey both stories and morality to those to whom the Bible was closed through illiteracy. Although by the middle of the 15th century books were being printed, it would still be many, many years before they came widely available at a price the ordinary man could afford and for most to have the skills to read for themselves. 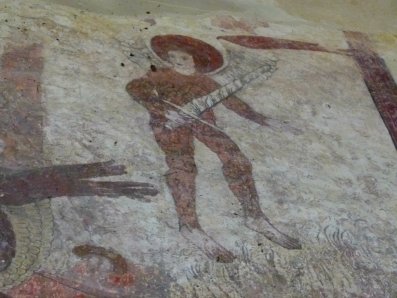 A rather curious costume?

The wall paintings of churches, then, provided a unique service… a picture book that spoke without words, telling the stories of the saints, tales from the Bible and instilling the Christian values deemed necessary both for the social position of the peasantry and for their entry into heaven. 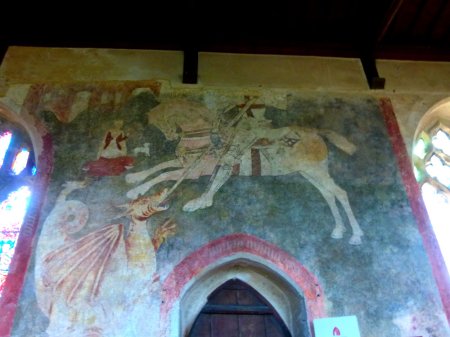 St George lost his head when the roof was replaced

At this point in our travels we had been fortunate to discover the wealth of wall paintings that survive in the small village churches of Buckinghamshire. Most of them were fragmentary, faded and intriguing. These were the most colourful and complete that we had seen and it took little imagination to see how they must once have looked when the entire church was covered in them. For an unexpected find, it was a treasure.

The maw of Hell

Sue Vincent is a Yorkshire-born writer and one of the Directors of The Silent Eye, a modern Mystery School. She writes alone and with Stuart France, exploring ancient myths, the mysterious landscape of Albion and the inner journey of the soul. Find out more at France and Vincent. She is owned by a small dog who also blogs. Follow her at scvincent.com and on Twitter @SCVincent. Find her books on Goodreads and follow her on Amazon worldwide to find out about new releases and offers. Email: findme@scvincent.com.
View all posts by Sue Vincent →
This entry was posted in Churches, medieval wall paintings, Photography, travel and tagged buckinghamshire, Christianity, history, medieval, Milton Keynes. Bookmark the permalink.