The White Horse of Uffington

An evening spent over good food and wine and deep conversation is not conducive to early mornings. Nevertheless, in spite of the 3am bedtime, I was up early to find my friend already downstairs being taught to play fetch again by Ani.

Two cups of coffee later and we were off bright and early towards Uffington. An accidental ‘wrong’ turn and we were, an hour later, at the foot of Dragon Hill in the mist. What would you have us do? We got out and climbed.

The area is all chalk. Along the edge of the hills runs the Ridgeway, an ancient route still in daily use for over 5000 years. Dotted along the Ridgeway are a great number of ancient sites. Among the strangest and most breath-taking is the sacred landscape of Uffington.

From the top of Dragon hill, a natural chalk pyramid enhanced and shaped by man, one has a reasonable view of the landscape. The flat topped hill, says the legend, is where St George slew the Dragon, and the bare patch on its summit is where the beasts blood was spilled.  To the west of this amphitheatre is a strangely shaped platform.. and it is only from these two vantage points one catches a decent glimpse of the main and most magical ancient construction. The White Horse.

Enshrouded in an early mist, we stood and looked at this very strange landscape that seems completely out of place among the gentle hills here. The ritual mound, the deep scar of the manger, a valley that seems oddly out of place, the terraces leading up the hill.. and the steep slope that leads to the Horse. If indeed it is a horse. Strangely, it can only truly be seen from the air, yet it dates back over 5000 years.

Deep trenches filled with chalk were once cut into the summit of the slope to create the creature, some 374 feet long. The picture is from Wikipedia because of the weather, though the morning was so eerie we could almost have flown.

We climbed the hill and stood beside the Horse. It is so vast that even close up one cannot see or photograph it properly. And the mists were rolling in rapidly. There is a sense of the continuity of time standing beside something that looks so sleek and modern and seeing it stretch back so far into history. The mist came in and blanketed the area as we stood in magical way. Two crows stood and watched us, then took flight… and a buzzard, wheeling in the air dived on one of them.

A few moments later we were treated to a display of aerial splendour from two buzzards, gliding silently and playfighting in the air. I made some comment about the hawk of the morning chasing away the carrion crows.. and as I did so a skylark rose before us, hanging in the mist and singing its magic to us. Quite extraordinary,, and it started a stream of birds that followed us all day in a most unusual fashion.

I noticed that the platform to the west of Dragon hill seemed to mirror the shape of the head of the dragon. Had the valley held water once upon a time, there would have been three versions of the world there, between the hills, the figure and the reflection. I imagined the horse outlined in torches in the night… for some reason this felt ‘right’. It was a morning when imagination had free rein.

We ascended the hill, passing the lone fairy tree, to the hill fort, a huge enclosure on top of the hill. The air sparkled with stars just on the edges of vision, in spite of the heavy fog. The crows followed us as and it felt almost as if we had crossed into another world.  We discussed the sheer magnitude of the engineering involved in these massive earthworks. We compared them to the building of these huge ritual landscapes to medieval cathedrals, surrounded by hovels and rudimentary living, yet these edifices were erected in all their grandeur because faith impelled it. That these structures were connected is evident… they are all far too big to hold little meaning, given the work involved in their construction.

We wondered why they had chosen the exposed and waterless hill top for the ‘fort’. Perhaps it was not simply a defensive thing. On a morning like today as we were cut off from the world by mists and had only the horizonless sky above us, we thought perhaps that was heir reason… to be closer to their gods and held in their embrace.

Back to the car and a short hop to a car park, where the buzzards came down so low we could see the sheer scale and the markings on the wings. Incredible. There are some things that just cannot be photographed.With robins, sparrows and chaffinches seeming to lead us every step, we walked the couple of miles along the ancient Ridgeway to Wayland’s Smithy next. It is an old chambered burial of the same era, still beautiful and tranquil within its ring of trees.

Stepping into this enclosure is like stepping out of time. The legends are only a small part of the story. The atmosphere is beautiful. We stayed a while here, watched by a blackbird, we had seemed to be escorted by birds all morning.  We left silver for Wayland as tradition demands, though we had no horse to be shod. There were faces in the great slabs of rock and we wondered if these were natural or by design. Our conclusion was that it didn’t matter. Maybe these stones had been chosen for their inclusion of the images of life, perhaps just to show that life and death are not separate but include each other always.

Face in the stones

Dreaming in the moment I saw a procession of people visiting their dead, the ancestors, as seems to have been the norm in those days, wearing the stone of the entrance, placing one hand on the stone in salute as they passed.

Entrance to the chamber

In spite of the cold there seemed to be a visible heat haze rising from the mound, and standing atop it we realised that this too echoed the shape of the Horse’s head. A reflection of a fourth world, perhaps. As we stood and looked at the stones from the centre, a feather fluttered down from an empty sky and landed almost at my feet. You could feel the old ones in the land. 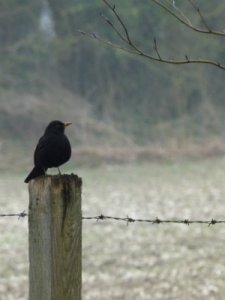 We retraced our steps, meeting an entirely appropriate white horse on the way back to the car as we departed in search of lunch. So it was no surprise that we stopped at the White Horse pub for the most delicious luncheon.

Lunch at the White Horse

I decided to take my friend to the Rollright stones on the way home… not too much of a detour. Bu the time we got there we had been treated to aerial dressage by a pair of crows, seen hawks into double figures, and had one quite literally rise from the ground beside us and fly within feet of our faces. Really most unusual.

The Rollrights are old and gnarled, pock marked and lichen covered. We said hello to the solitary King stone first, then down to the chambered cairn site of the Whispering Knights before visiting the circle itself.

My friend explored the stone circle and I took the camera to the sighting stone in one of the huge stones. Sure enough, sighting through it, it aligns perfectly with the Knights.

Through the sight hole to the Knights

We have an incredibly rich ancient heritage in this small country of ours. It seemed entirely appropriate somehow that we should stand within it and touch our roots in the past on this vernal equinox.

Then home, dinner and another evening of deep talking over the wine. Which is why I sit here in the early hours typing. Altogether a magical day.

Sue Vincent is a Yorkshire-born writer and one of the Directors of The Silent Eye, a modern Mystery School. She writes alone and with Stuart France, exploring ancient myths, the mysterious landscape of Albion and the inner journey of the soul. Find out more at France and Vincent. She is owned by a small dog who also blogs. Follow her at scvincent.com and on Twitter @SCVincent. Find her books on Goodreads and follow her on Amazon worldwide to find out about new releases and offers. Email: findme@scvincent.com.
View all posts by Sue Vincent →
This entry was posted in Life, Love and Laughter, Spirituality and tagged being, Life, The Silent Eye. Bookmark the permalink.

37 Responses to The ancient land